The Rhode Island Comic Con was the last show I attended in 2019. I wrapped up the convention year with a table and, of course, not knowing that I wouldn't attend any show in 2020. RICC was back at its regular dates this year, and I was able to get a table once again, so it had many full-circle moments as I ventured back into the world of selling stuff at conventions.

So how was it? It was weird. But here are some pictures, in the spirit of the grand tradition of this damn blog, which I have been using for like 13 years at this point. That is also weird. Anyway, let's look at some pictures! 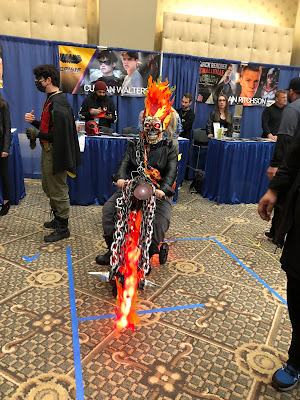 The eerie glow of the wheels on Ghost Rider's bike really sells this costume. The lights are a perfect touch. 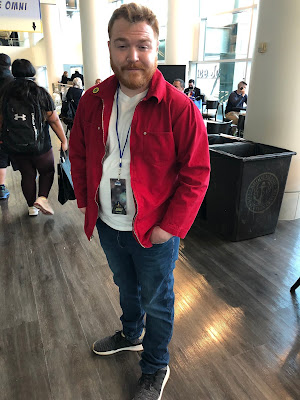 Low-key Philip J Fry is a nice go-to if you've got red hair. It also works as a James Dean costume outside of convention center grounds. 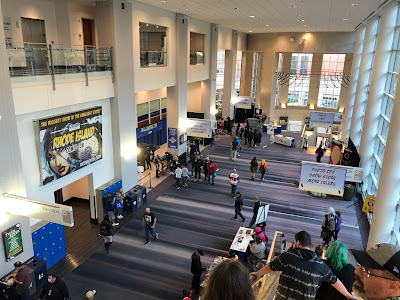 Here's a look at the main show floor hallway, traveling down the escalator. It's hard to compare attendance at this show to that in 2019. Saturday felt busy at times. It was pretty sparse at moments on Friday and Sunday. I don't blame anyone for not feeling comfortable getting back to regular conventions just yet. I suppose that the crowds came in waves, and in between those waves, the attendance was light. 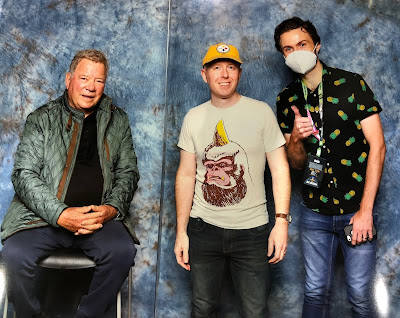 Okay. So. William Shatner announced that 2019 would be his last year for convention appearances. At NYCC in October, I paid (a lot) for an autograph. At RICC, my pal Ian and I went for one of the photo ops. The plastic divider in the picture is distracting, and these celebrity photo ops are pretty cheesy in general. But I couldn't pass up what will probably be my last chance to get a photo with Captain Kirk. 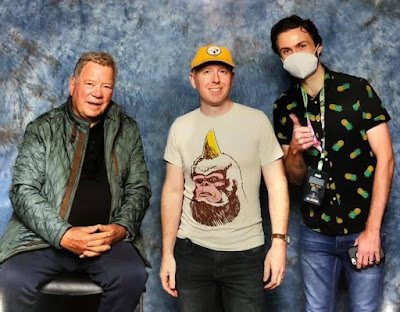 I posted the picture online, and some random kind soul quickly came back with this edited version. Bless the person who did this. Maybe this will be my Christmas card this year. 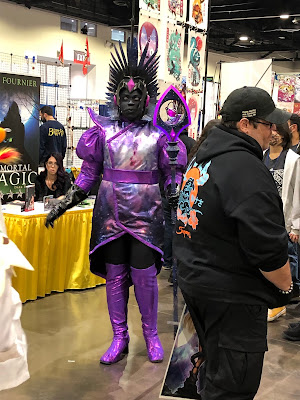 I don't know what this costume is! But it is impressive! 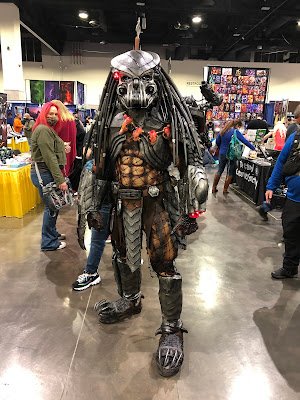 This Predator costume was probably the most popular at the show, and this guy paid the price for having a good outfit at a small convention. I often saw him surrounded by crowds for 30 minutes at a time, and he'd eventually have to ask people to let him leave. It's a double-edged sword, my friend. 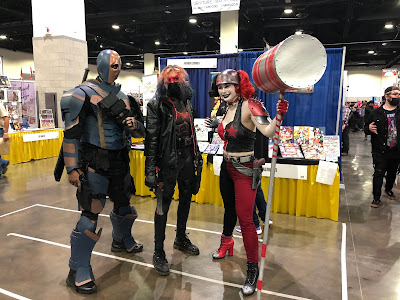 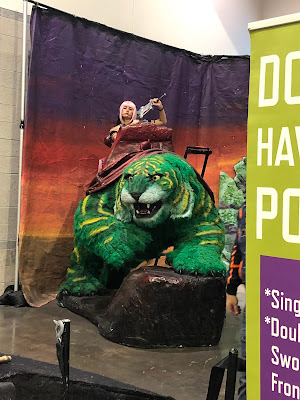 One of the photo booths on the floor allowed you to take a picture with this really huge Battle Cat. You could sit on it, hold He-Man's sword, the whole thing. I know that this isn't a licensed thing, and I wonder who was in charge of spray painting the tiger model green, but it was still fun to see. 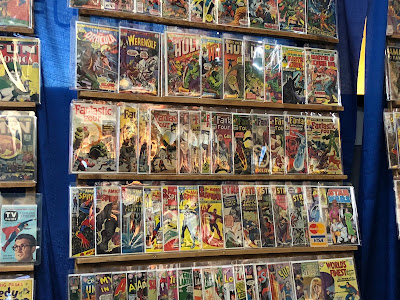 Sometimes at shows, especially small shows, the things I enjoy seeing most of all are the old and very expensive comics. Here's a hefty run of the Fantastic Four that includes issues 1, 2, 4, 5, 52 and others. 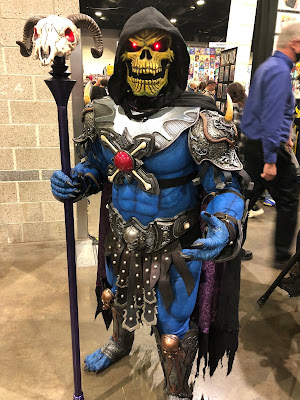 I'm here for this Skeletor. 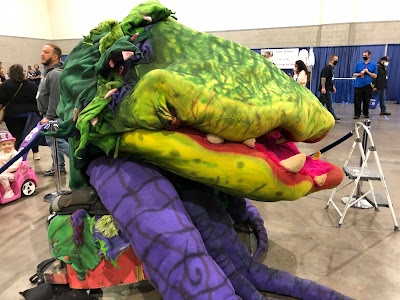 This Little Shop of Horrors Audrey II prop was roped off on the show floor. It looks like someone could get in it and operate it? But every time I saw it, it was just there for display. 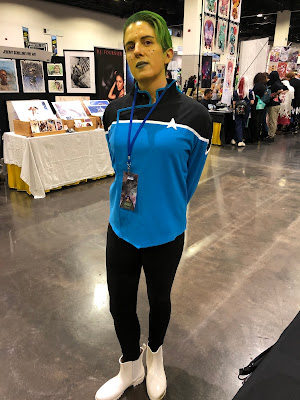 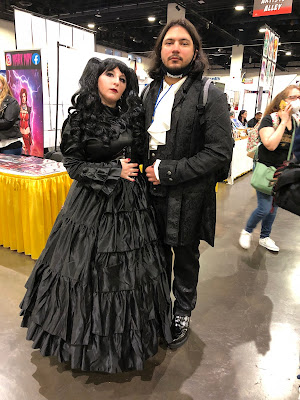 I saw more than one couple dressed as Laszlo and Nadja from What We Do In The Shadows, which is also a wonderful show that I've just recently finished watching. It's a great idea if there's more than one person if your group. 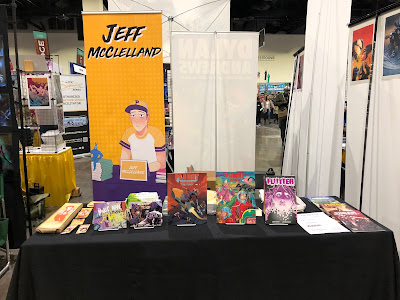 I was kind of bummed when shows shut down for 2020 - I was also sad for other, more important reasons, I guess - so I decided that I would get unnecessarily dressed up the next time I was able to get a table. It took two years, but I was finally able to get back to exhibiting a convention in November of 2021. So here's the table... 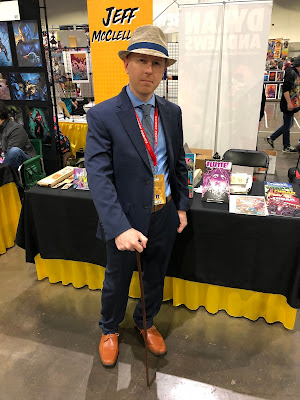 ...and here I am, resplendent as always, at the 2021 Rhode Island Comic Con. Everything about this is ridiculous. 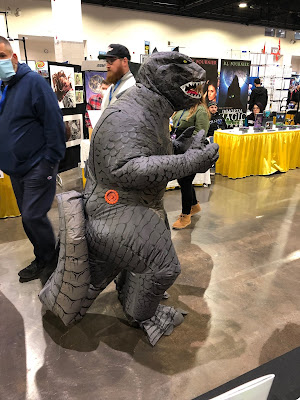 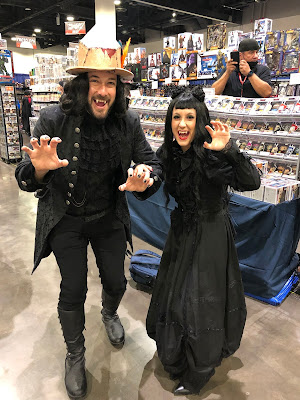 Here's another Laszlo and Nadja. Laszlo is wearing his cursed hat. 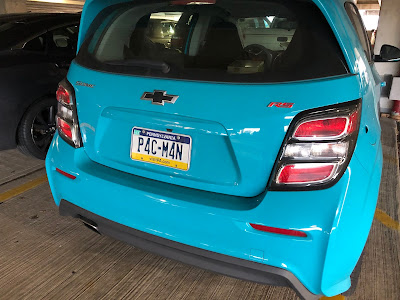 Well, now I know who in Pennsylvania has this variation on the Pac Man license plate.

I was able to be on a panel, see some friends, and be bored at a comic convention again for the first time in a while. I'm happy about it all.