Curt Swan in undeniably one of the most influential Superman artists of all time - I would say that the only artist who can compare is Joe Shuster, the character's co-creator. Swan was a DC stalwart for decades, churning out thousands of pages for any number of titles, but he's rightfully most well known for his work on the Man of Steel. After Swan died in the mid-'90s, DC continued to use some of his unpublished pages for anniversary stories, such as Superman's Wedding Album issue and, more recently, 2018's Action Comics #1000.
The market for Swan's work is pulled in two directions. His pages are in demand because of his classic take on comics' most recognizable character, but since he was so prolific, there are simply a lot of pages, especially from the 1970s onward. Generally speaking, an in-costume Superman appearance means you'll pay a bit more than one without. I was recently able to purchase two very affordable pages from 1977's Superman #310, both with pencils by the legendary Curt Swan. 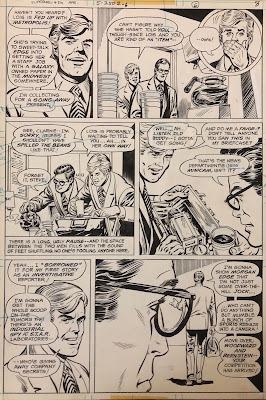 The pages, interestingly enough, are ones published subsequently: story pages 8 and 9. 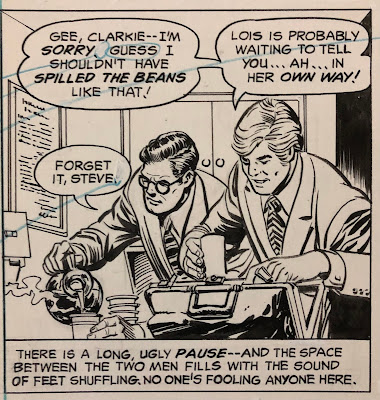 The first page is undeniably the better of the two, because this one features none other than a bespectacled Clark Kent, looking dapper in his business-professional suit (but, sadly, no hat). Also featured is Steve Lombard, a character who pops up every so often in the book.

Steve is a former jock who sometimes picks on Clark, still thinks of himself as the star quarterback, and is often kind of a joke - he's a guy whose best years are behind him, but he doesn't realize it. His type is probably familiar to most folks and he's someone we should probably pity. Sometimes he and Clark have an inter-office rivalry, but it often ends with Clark, like, secretly using his super-breath to blow his chair out from under him so he dumps his sandwich on his shirt of something.

Both of these pages had dialogue that was pretty heavily edited, as seen above with all of the blue editor's pencil marks. But both pages came with the margins trimmed, so I couldn't see what most of the lines pointed to. 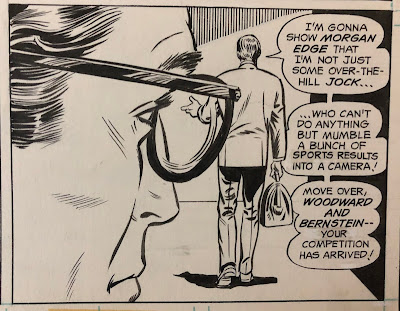 Anyway, Lombard is a character who has been around for decades, but most people aren't familiar with him. On this page he takes the company's new camera in an attempt to get an inside scoop. Oh, it should be noted that in the '70s, Clark, Lois and company moved on from the Daily Planet to WGBS, a television news station. I guess they thought that the newspaper industry wasn't relevant anymore? NEVER! 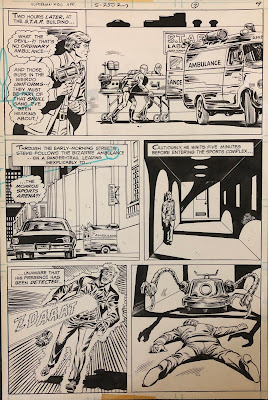 The second page in my bundle is, unfortunately, sans Clark, as we follow Lombard on his ill-fated operation. But we do come across another Superman staple - STAR Labs! I guess it's S.T.A.R. Laboratory on this page. What did "STAR" ever stand for? Anyway, Steve meets up with a robotic menace and is down for the count. 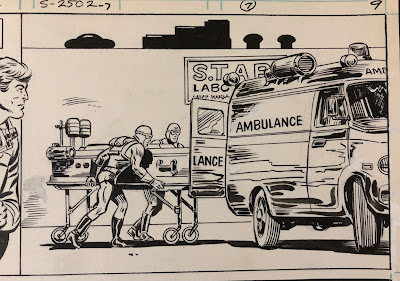 I know henchmen when I see them! This crew is actually smuggling Metallo out of storage, where he'll later do battle with Superman, and Lombard will be used as bait. 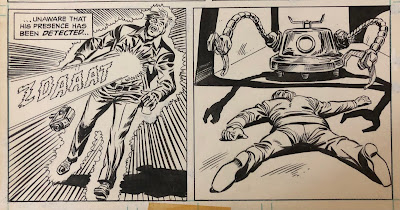 These pages were inked by Tex Blaisdell. I don't necessarily think his inks went particularly well with Swan's famously clean lines. Blaisdell's inks seem to roughen up the artwork a little much for my tastes - he's no Murphy Anderson. 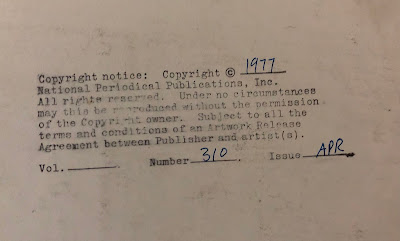 The back of both pages comes with a stamp that indicates copyright information. 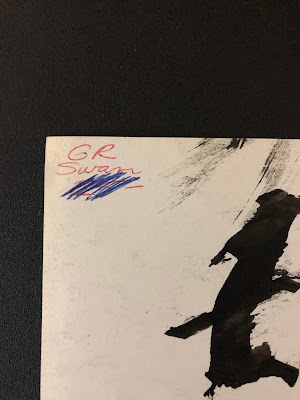 The back of one page comes marked with two possible names: GR and Swan. The second is obviously a reference to Curt Swan, but I have no idea what GR stands for. The issue was written by Martin Pasko, Inked by Blaisdell and edited by Julie Schwartz. Maybe it indicates that it's a GREAT PAGE! Maybe.

We can also see, scratched out, that this page was at one time on sale for $25. The first page in this set, with Clark, was at one point $55. Despite getting a really good deal, I paid a bit more for these. If you see a Curt Swan page on sale for $25, grab it! 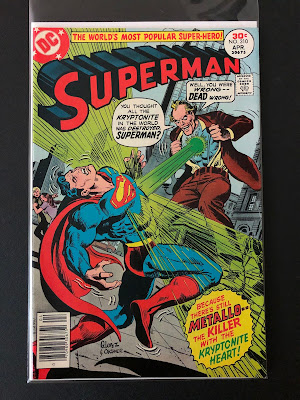 Here's the issue that includes the pages! The cover is not by Swan, but rather Jose Luis Garcia Lopez. 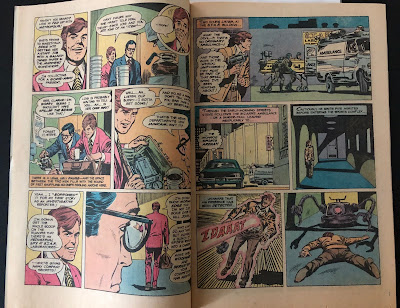 And here's the two-page spread, with Clark looking on and Steve getting shot all to hell by a killer robot.

I've been on the lookout for some Swan original art, but they're usually a bit above my price range. These two rather everyday pages fit my budget and also featured some dramatic robot action and a concerned Clark Kent! I'm happy to have 'em.

It says something about a character's reach and popularity when others are willing to take that character and make their own copy, flouting copyright law and, in some cases (as we'll see), the bounds of good taste.
Such is the case with the Thing, nothing less than a company mascot in the '60s and '70s and still one of the more popular characters under the Marvel umbrella. Bootleg action figures of the character abound, and every time I see one, I try to grab it. Over the years I've amassed a few, and I thought it'd be interesting to take a look at the ones I have.
All of the below figures, to my knowledge, originated in Mexico. It seems our neighbors to the south and Latin America in general have a taste for bootleg toys, but I'm sure that there are others out there from different continents. If you are reading this and you feel the desire to part with your faux Ben Grimm figures, I hope you'll reach out. 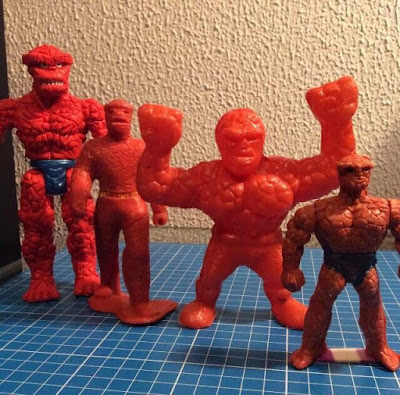 These four figures are the first bootlegs I bought, from a few years ago, and ever since I saw these, I've been on the lookout for more. There are some real all-time greats in this bunch - I started out strong. Let's get a closer look at a couple from this image: 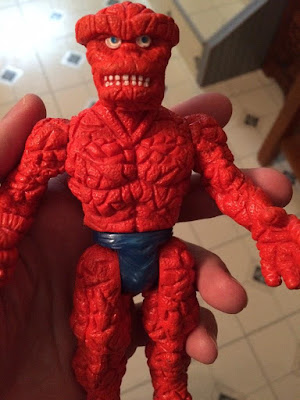 This skeletal-looking Thing is one of my favorites, with his metallic speedo and tiny, individually-painted teeth. This one is also pretty big and sturdy, and is one of the few with a more well-defined figure (as opposed to a blob that came out of a cheap mold). The orange color really stands out as well. 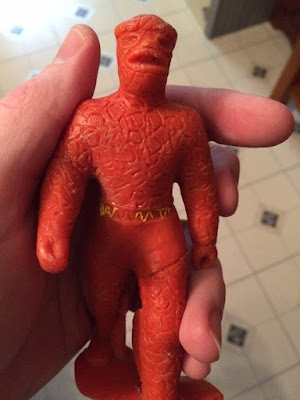 This second Thing from the group is, by virtue of its ski-mask-like facial features, kind of frightening to look at. It kind of looks like someone took the Thing's face and is wearing it over his own face. Ben, is that you under there? 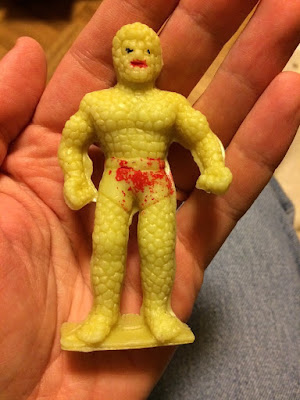 Not all of the Thing bootlegs are even orange. I guess this neon yellow was the best they could do at the time. This one kind of looks like cauliflower to me. 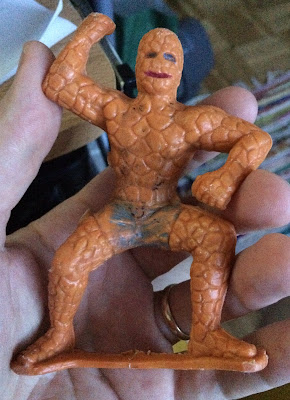 Here's The Thing in the middle of a dance move, I guess? One of the features of many of these bootleg toys is a faded paint job, seen here in Mr. Grimm's powder blue trunks. The sunken eyes and mouth slit are the most we're getting with regard to facial features. Who needs a nose? 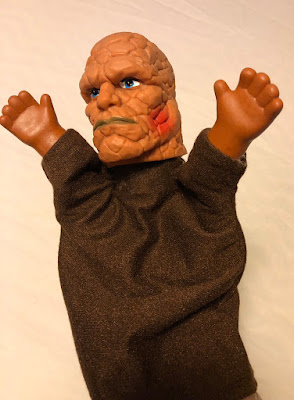 This right here is probably the most bizarre one of the bunch. It is nothing short of a Thing hand puppet; the only plastic features are the head and the Mr. Rogers' Neighborhood-style hands. Why the Thing needs to wear makeup (check out those rosy cheeks!) is also a mystery. The head mold on this one is actually pretty good, and is reminiscent of the Michael Chiklis-style Thing from the mid 2000s movies. 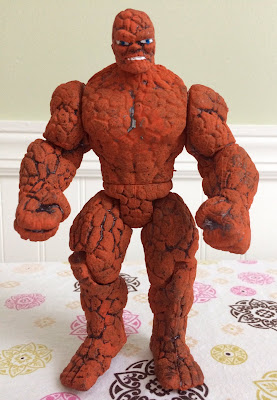 This Thing comes with a surprise. No, it's not that he is apparently nude... 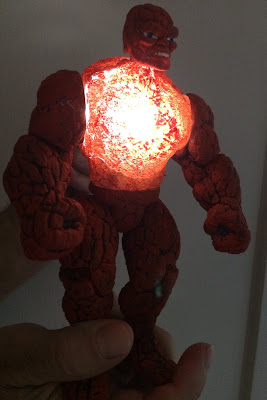 ...this one lights up! It kind of looks like his chest is exploding. Anyway, there are a few similar bootleg Thing figures with he same light-up feature (this is the only one I have a picture of). I guess it added an extra incentive to buy the toy? It seems kind of odd to me. 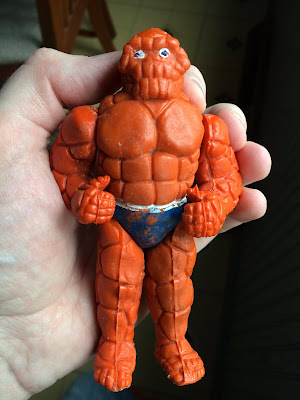 Here we have perhaps my favorite bootleg Thing toy of all time. It's a solid figure that reminds me a lot of the 1960s cartoon Thing, with his lumpy mouth and the relatively large rock segments, especially in his chest area. When I get a bootleg Thing figure, I often store it away, but I keep this one out on my desk. It's ugly and weird in all the right ways. 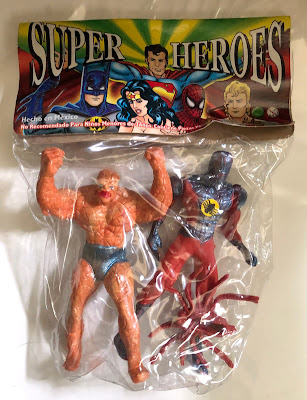 I've got a couple bootleg figures that never made it out of their packages. This one even comes with a friend, and I have to say that I might like the inverse color Spider-Man more out of the two. Spidey also comes with a giant spider accessory, just like in the comics. 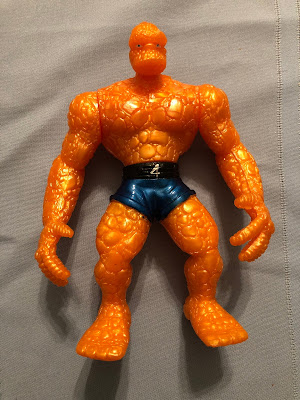 This one is probably the most official-looking bootleg I've got, but the shiny trunks and the seemingly hand-painted "4" on the belt give it away. Still, this is high quality as far as these go! 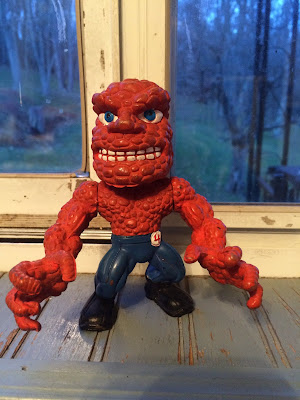 I've never seen another like this one, with its exaggerated, giant head and long arms. The pants seem to indicate that it's also from the 2005 movie era. 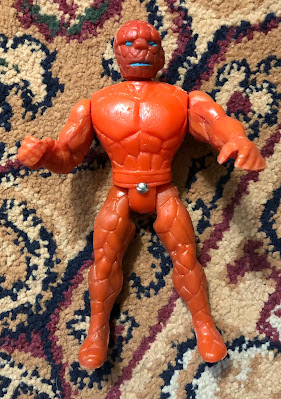 This is the most recent bootleg figure I've bought, and it's another gem. It's kind of Mego-esque with its Thing-style head on a more generic action figure body. This one comes with a screw right through his waist, and there's a lever on the back that makes the figure's arms move up and down. He also comes with a slightly deformed head. 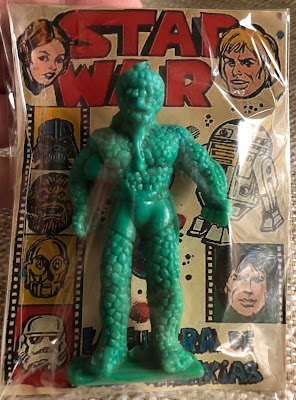 Here's one more oddity for today. This blue-green figure is similar to the above "cauliflower" Thing, but what makes this one special is the packaging. It's a bootleg within a bootleg, as the "Go see a Star War" card inserted into the plastic sleeve adds another dimension. It also looks like Ben Grimm is getting ready to go on a job interview and has decided to wear a tie.

I don't know what it is about these things. They're ugly and poorly made and often misshapen, and also I absolutely love them. I've got a few more packed away somewhere, but these are a pretty good representation of the bootleg figures I've got. I'm always excited to see 'em.