My convention schedule has been fairly light in recent years.  I know some creators who travel all across North America throughout the year peddling books and other comic-related items - and I honestly can't understand how they have the money and mental fortitude to do it.  In any case, earlier this year I decided that I would try to get to a few more shows in the upcoming months.  My school schedule doesn't really allow for long trips outside of the summer, and the summer is swallowed up pretty quickly by Comic-Con in San Diego, but I've managed to get a few items on the schedule for September and October.

The first show is happening in...just a few weeks, it seems!  It's the inaugural Wizard World Pittsburgh show.  I'm not really sure what to expect.  Wizard World takes over for the former Pittsburgh Comicon, and it makes its move from Monroeville to downtown Pittsburgh, which is exciting.  Wizard World has a bit of a reputation for focusing on celebrities over creators, but so far I've had no complains about my interaction with the staff of the show.

They even put a link to my bio right on the front page, along with everyone else.  I, of course, forgot to include a reference to Imaginary Drugs, one of my two higher profile publications to date.  Oh well.

Next up, I'll be returning to the Baltimore Comic-Con for the first time in a few years.  This show takes place at the end of September, just two weeks after the Pittsburgh show.  Since expanding from their previous two-day format to a more traditional Friday-Saturday-Sunday schedule, it's been more difficult for me to come to this show.  This year, however, I'm sharing a table with the very talented Jennie Wood, which allows me to be there just on Saturday and Sunday.  Jennie will be debuting the second volume of the popular Flutter series at the show.  I was lucky enough to get a chance to letter this new volume, so I'll be signing copies along with Jennie those two days.  Series artist Jeff McComsey will also be at the show, so it'll be a whole dang event.  Here's a visual representation of my lettering spree over the weekend:

We'll be at booth A223 for the show.  That's located in artist alley.

And just a few weeks after that, I'll be at the New York Comic-Con in New York City.  The plan right now is for me to be there on Friday and Saturday of the four-day convention.  I'll be wandering around aimlessly plenty of the time, but I'll also be making stops to sign books and generally gawk at the crowds at both the FUBAR and Flutter booths.

Oh, and Rafer Roberts will be giving out copies of the newest volume of Thanos and Darkseid: Carpool Buddies of Doom at the show.  I love these dang things.  I am going to snatch one up like nobody's business. 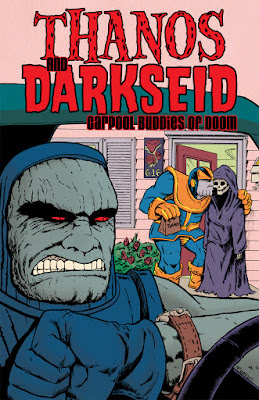 It'll be a busy few weeks.  Afterwards, I think I'll stay at home until February.  But we'll see.
Posted by Jeff at 11:33 PM No comments: 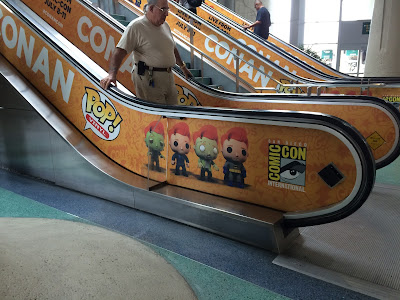 Comic-Con 2015 is in the books and the show is as big as ever.  2015 was my fourth year in a row at the San Diego event, and I feel like I'm just starting to get a handle on things.  I had a great time and took a lot of pictures...those two things bring us to this new addition to the long-running blog tradition of inundating the Internet with pictures from the show.  So let's get started and see where it takes us.  All of the pictures, including the picture of someone's grandpa riding a Conan O'Brien escalator at the San Diego International Airport, are from the Tuesday before the show. 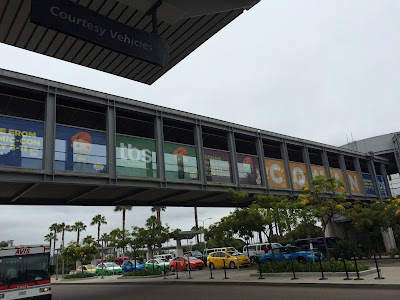 Conan had a big presence at the convention, and he filmed several episodes of his late night talk show  near the convention.  Tickets to these tapings went fast (of course) and I wasn't able to get any.  Apparently, Funko gave away an exclusive Conan bobblehead at each taping, many of which naturally were then sold for lots and lots of cash online. 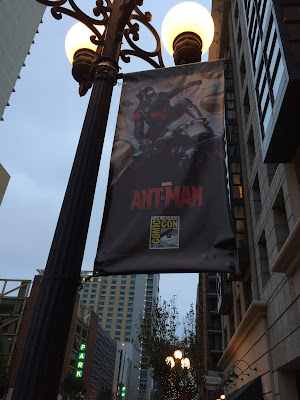 After checking into out house for the week, I took a drive downtown and saw some of the Comic-Con setup.  I highly recommend arriving in San Diego at least a day before the convention to battle jet lag, and also to get some bearings for the days to come.  One of the signs of Comic-Con's imminent arrival are, well, the literal signs that hang from lampposts all about town, but especially in the Gaslamp district.  Many of this year's banners featured Ant-Man. 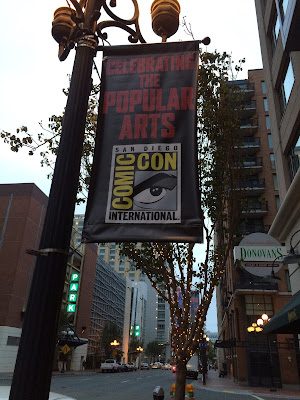 I wonder what happens to all of these banners after the show?  They remain hanging for a few days after the convention ends, and I'm always tempted to get a ladder and try to grab one. 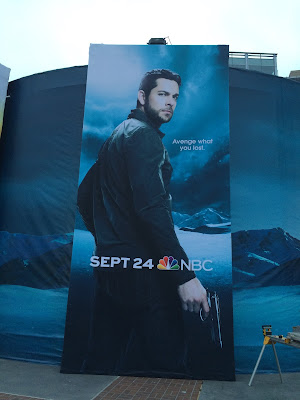 As in years past, many of the exhibits were still being constructed on Tuesday, with some not reaching completion until just before the doors opened on Wednesday (and sometimes even later).  I guess the show "Heroes", for whatever reason, is being revived by NBC this fall, and there were a lot of promotional items for this across the convention hall and outside.  Zach Levi, he of NerdHQ fame, has a role in the show, and he even got a giant standee of himself.  If I was on one of these, I'd probably try to take it home with me.  But where would you put it? 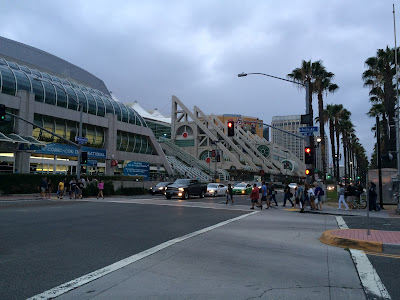 Here's the outside of the convention center.  This was taken after the hall was closed to exhibitors for the evening, and a lot of people wearing pink badges were streaming out at this time.  Even though I had a badge of my own waiting for me (an orange professional badge), it's hard to not get anxious seeing other people with access to the inside. 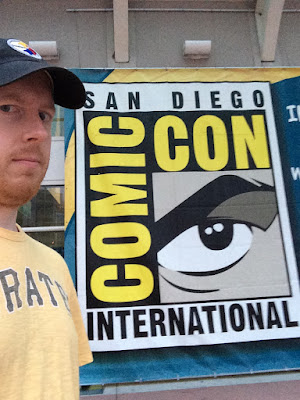 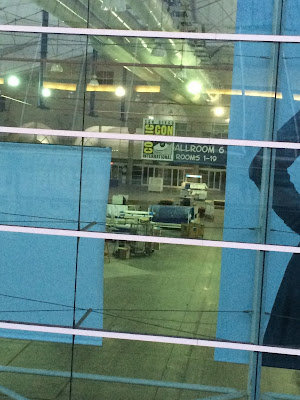 Walking up the steps to the top of the convention center, you could see inside the Sails Pavilion as it was being put together. 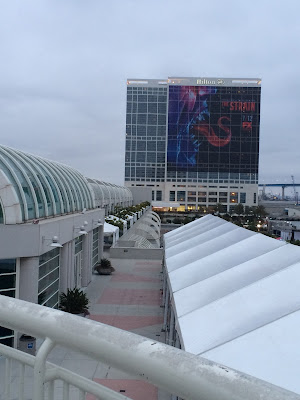 Across the street, the Hilton had a giant tongue banner draped over its side.  Okay. 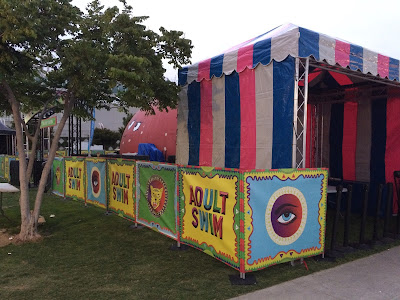 The Adult Swim attraction, always one of the must-see outside exhibits, was located behind the convention center this year, right along the water.  There was a carnival theme to it this year.  In the background you can see the Meatwad's Dome exhibit, the only holdover from 2014. 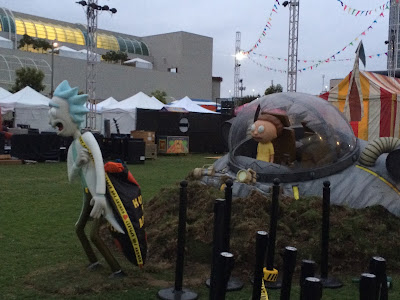 Rick and Morty (one of my favorite new shows) had a big presence at Comic-Con this year.  This display wasn't interactive at all...but it was still pretty cool.  Again, what happens to this after Comic-Con? 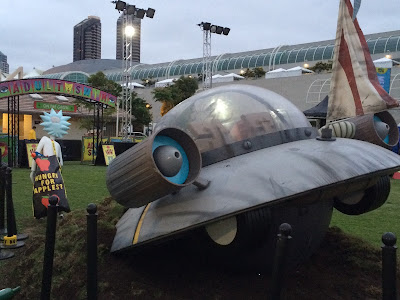 Here's the back.  You can see Rick carrying a bag.  I took a peek in it once or twice, thinking that there might be some kind of prize inside, but as far as I could tell, the staff just used it for trash.  That might have been a cover...who knows? 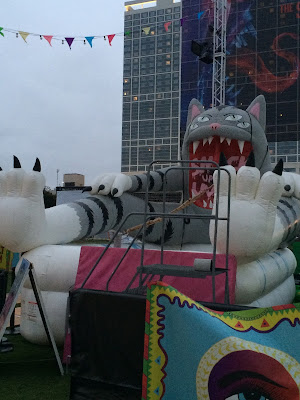 This was the last picture I got before some of the security workers yelled at me to stop taking pictures.  I suppose Adult Swim didn't want their setup leaked before the show started.  Being outside, though, I'm sure that was impossible to prevent. 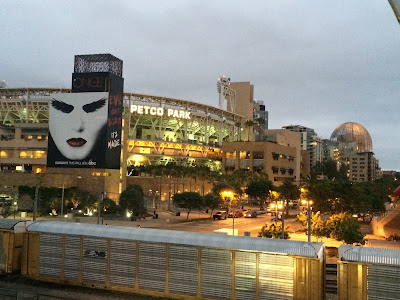 And here are some bridge shots, a requirement at Comic-Con. 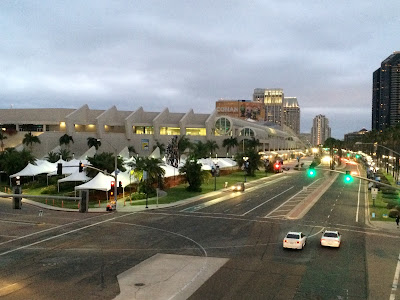 Here's the convention center from the bridge. 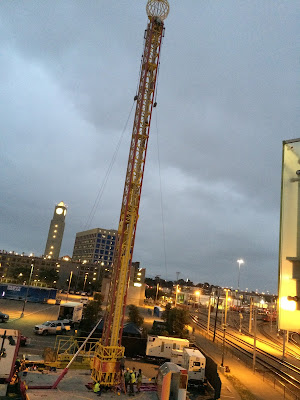 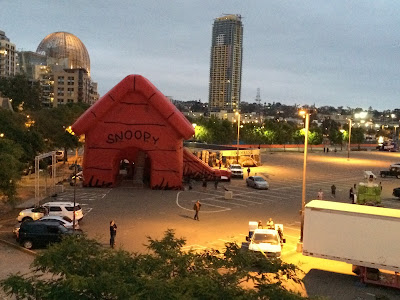 Later on the convention, they brought a terrifying, giant mutant dog to lay on top of the house. 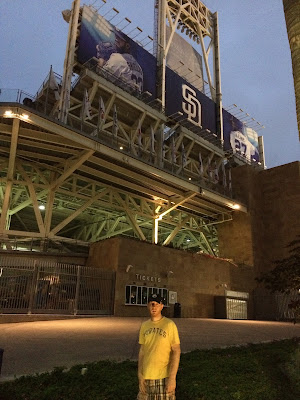 The Pirates were playing the San Diego Padres this night and a few nights during the convention.  They were of course playing in Pittsburgh, but I thought it was funny that we switched places for a week.  I was also lucky because I was able to catch some of the games on local tv and radio while we were in town. 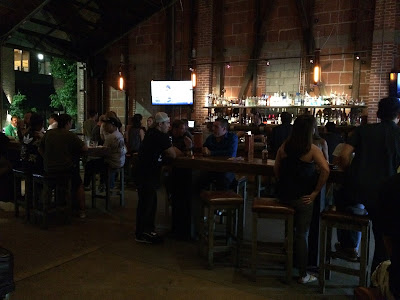 The big event for the night was a Teenage Mutant Ninja Turtles "Shell Shocked" art exhibit at the Basic: Urban Kitchen and Bar in downtown San Diego, just a few blocks from the convention center.  There were also some official Comic-Con events going at the year-old library this night, so Comic-Con has formally started to take over Tuesday night as well.  I went there and, what do you know, the Pirate game was playing, so it was a double treat. 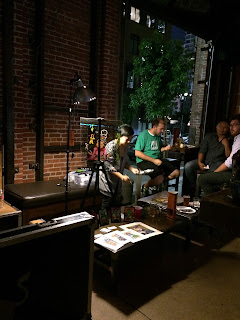 There were a number of displays, as well as some live art going on. 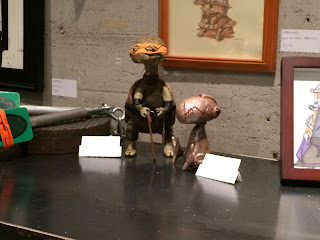 This was probably my favorite of the art displays - a senior turtle and mouser. 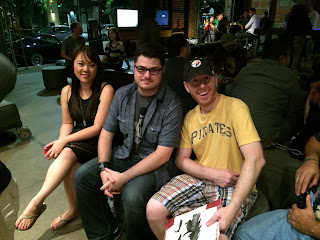 I don't know who these people are - I just thought it'd be fun to take a picture with them.  And it was!! 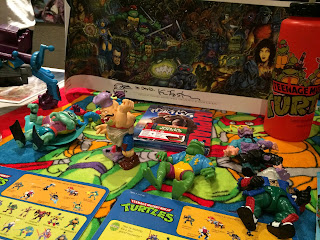 Someone involved with the exhibit also had some of his collection on display.  I ended up buying some cheap art and spending about an hour at the bar before heading back to get ready for Comic-Con's first day.  Won't it be fun to see some of those pictures as well?  YES IT WILL BE.  And oh, we'll see them.  Soon.
Posted by Jeff at 7:03 PM No comments:

I've been lucky enough to be pretty busy with comic work over the last few months - this year, even, I guess.  One of the (admittedly few) downsides to that is that I don't have very much time for this blog or other types of recreational writing...but I'm still out here, doing...stuff. 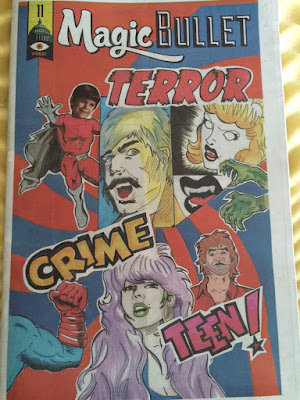 Somewhere on that list of stuff sits a new issue of DC Conspiracy's Magic Bullet!  This recently released issue is currently being circulated primarily around the Washington, DC area.  I've had a few comics published in previous issues, and this time around I teamed up with a few friends to create a one page comic titled "One Wish". 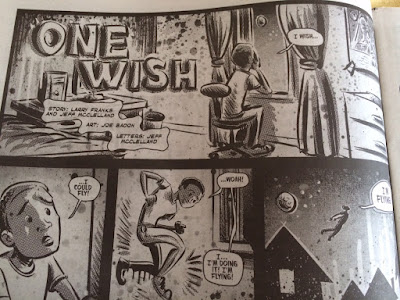 "One Wish" came about after a conversation with your good friend (and mine) Larry a few years ago.  I'm not even sure what the context of the conversation was, but he let it spill and I decided that it might make a good Magic Bullet-style comic, so I plotted it out and put the letters into the final product.  Providing the art is the incomparable Joe Badon.  It all came together pretty well, I think, and I'm happy that I was able to put this together with those two guys. 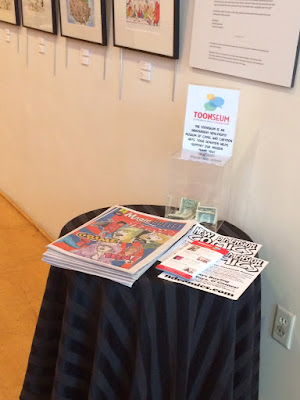 I got a bundle of comics in the mail and have been working on distributing them around the Pittsburgh area.  I spent the summer volunteering once again at the Toonseum, so it was a good bet that I'd leave a stack at the entrance to the comic/cartoon art museum.  I'll also be bringing some with me to the inaugural Wizard World Pittsburgh show, which is coming up in just a few short weeks (more on that later)! 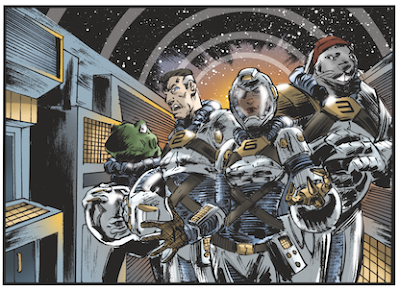 Before I go, here's one more peek at something else that I'm working on, this time with Ian Chase Nichols.  I worked with Ian on a few Tick projects and I'm happy to be collaborating with him again. I'm putting this clip up here because this comic is also for a newspaper-style publication, but it's not the MB.  I'll give out some more information on that project when it gets a little further along.
Posted by Jeff at 8:59 PM No comments: