It's Leap Day! It's the Thing sketchbook! Here are five more entries! 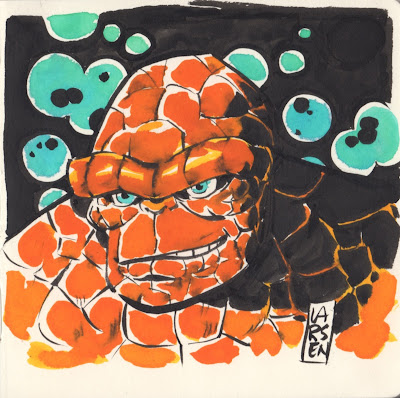 Christine Larsen is a criminally underrated artist; she's one of my favorites and I grab some artwork from her whenever I can. This sketch is officially the last one where I was willing to mail the book to the artist, but hey, it was good while it lasted. Check out this full-color Thing bust! Yippee! 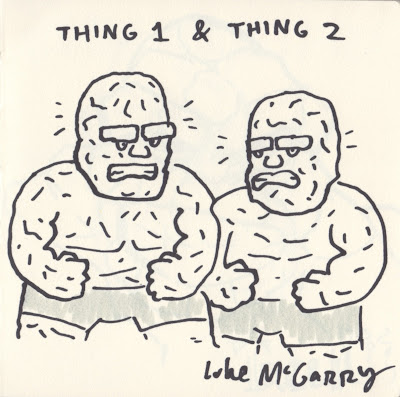 In 2017, I took the sketchbook to Comic-Con in San Diego for the first time, and I have to say, I managed to get some great artwork on this trip. On Preview Night, I found Luke McGarry, who was selling a poster for a music festival that he drew. Included on the poster was Weird Al, so I grabbed that and managed to get a Seussian Thing sketch as well. Here's a look at the poster, too! 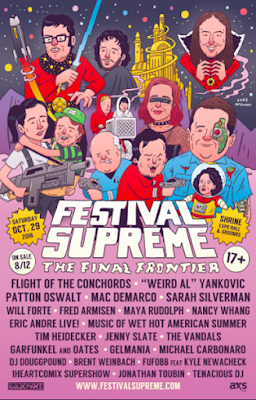 You can see Al in the top right corner! 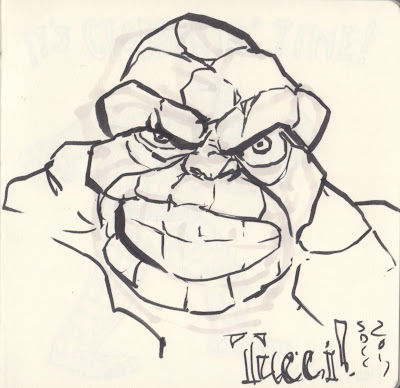 The Overstreet Comic Book Price Guide, the industry standard for price guides, releases an update every year, and like many comics, they now come with different cover art for different versions. 2017's oversized edition came with a Tick cover by Billy Tucci. Naturally, I grabbed one at the show. Tucci was offering up quick sketches with every price guide purchase (his booth was near the New England Comics booth, too), so I managed to talk him into drawing the Thing in my sketchbook.

Heck, let's look at the price guide, too! 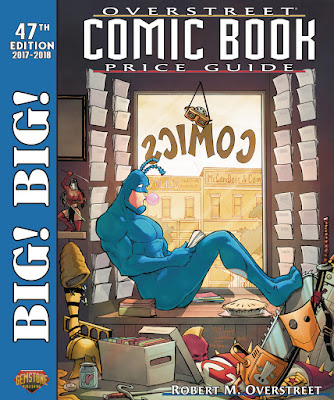 Lots of Easter Eggs in this cover. 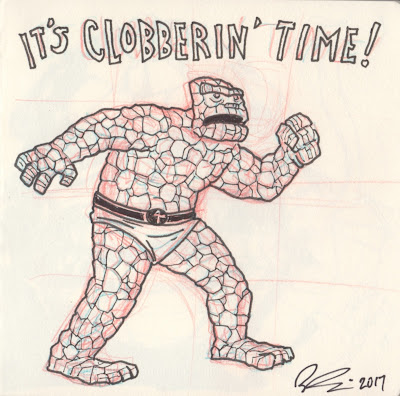 Douglas Paszkiewicz is probably best known for his Arsenic Lullaby comic, but I became familiar with him after her drew and issue of The Tick that came out in the fall of 2017. I got a chance to meet Douglas at Comic-Con and, of course, I had my trusty Thing sketchbook with me at the time. I really love this one. 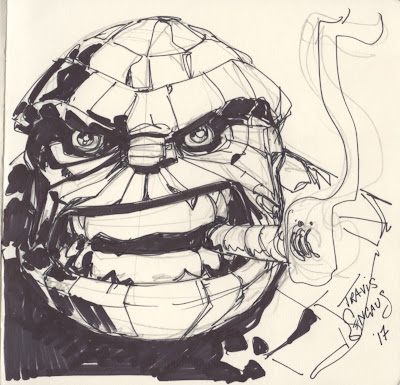 Last up is a sketch I never thought I'd get. I've known Travis Sengaus for a while and we've worked together on a few projects, but I had never met him until we bumped into each other at Comic-Con. He wasn't at any booth or table, but he still found some time to hide away for a few minutes and draw this great cigar-chompin' Thing. 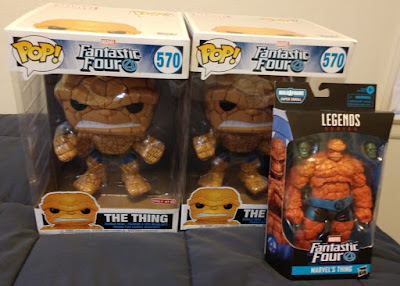 One more item for today! With Disney's recent acquisition of Fox's media properties, Marvel is back to admitting that they own and publish the Fantastic Four, and that means that there has been quite a bit of FF merchandise on the shelves lately. My friend (and yours) Larry found these giant Funko Pop! Thing toys at Target and picked up two for me. There's also a new Fantastic Four Marvel Legends series out there, including this really impressive Thing figure. Both are now mine, and I'm happy to have 'em!
Posted by Jeff at 12:08 AM No comments:

Watch Ian Nichols draw The Tick! (And some other Tick news!) 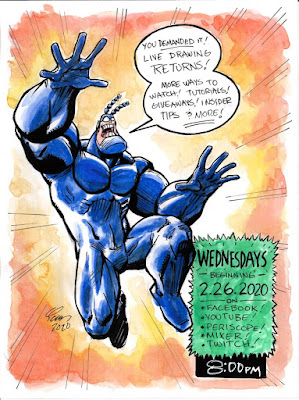 Ian Nichols, my friend and artist on The Tick, is filming and streaming some video of his drawing board for all to see. Starting pretty soon - February 26th and continuing on Wednesdays, Ian will be sitting down and drawing different characters and subjects and letting the world get a look, too. These will be streamed on a bunch of different platforms and archived on YouTube. Check out this video of the announcement, with The Tick!
Ian often gives the drawings to someone who shares the video as it's streaming, so you could get some really great art out of the bargain, too.

I guess Ian has two YouTube channels. Why would someone do this? Is one a burner account? Anyway, here's a (much longer) video of The Tick and Caped Cod from about a year ago:

If anyone's interested in the process of drawing comics, I hope you'll check out Ian's videos. It's a good behind-the-scenes look at what it takes to make comics. 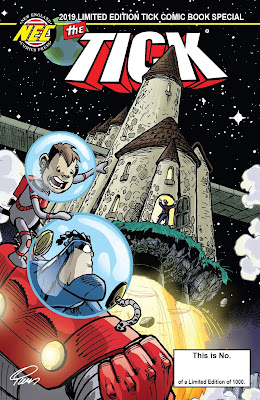 There are a few other items to pass along, if you're interested in reading more about The Tick. First, New England Comics is reprinting the 2019 convention issue (this'll be...the fourth printing??) just for their Massachusetts-area stores with a new cover by Ian Nichols.

The issue is limited to 1000 copies and, from what I understand, hasn't gone on sale yet. Why not, you might ask? I...do not know. Please sell them, NEC. I would like to get a few copies, myself. 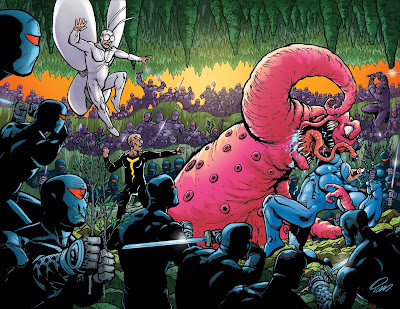 The 2020 Free Comic Book Day Tick Special has been announced, and here's a look at the cover, once again by Ian! This image will actually stretch across both the front and back cover, which I think is really exciting! This one has a lot going for it, including Thrakkorzog, the Ninja Hedge, the Terror, a...cave? Anyway, I really enjoyed seeing this cover.
The folks over at Free Comic Book Day have a preview of the issue online now, in case you want to check it out, here: https://freecomicbookday.com/Catalog/JAN200034

The cult classic character #TheTick is rebooted in this latest comedy series starring #PeterSerafinowicz and #GriffinNewman.

The Complete Series will be available on #DVD tomorrow: https://t.co/BZ78zrtrgR pic.twitter.com/WrvxZPTAAE
— Via Vision (@viavisionent) February 11, 2020

Lastly, the Amazon Tick complete series is on sale...in Australia. It is a legitimate release. Did I get a copy? Yes. Is it formatted so that I can actually watch it? I don't know. But I'm glad to get a DVD copy of this show in any case. I hope that there's an official US release (in HD, hopefully) to follow soon. 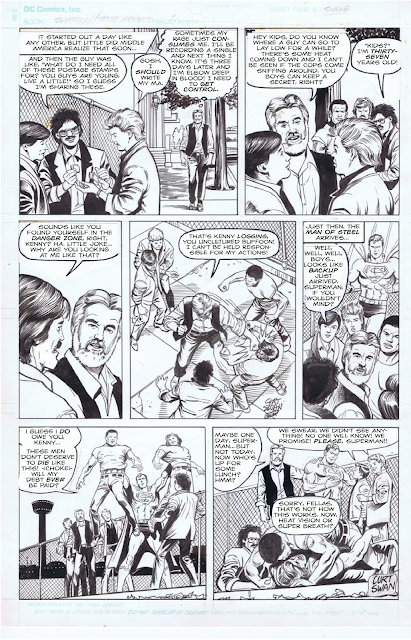 Curt Swan's 100th birthday was on February 17th, and as such, folks were sharing images and stories of Curt and his work online as a tribute to the greatest Superman artist of all time. Some even shared pictures of the original Swan artwork they own, which was a special treat for me. Swan is one of my favorite comic artists and I'd love to own a piece of his art one day.

Phil Hester, probably best known for his DC work as both a writer and artist (he also drew a cover to Teddy and they Yeti #1, wouldn't you know), shared a piece from his own collection, an anti-drug public service announcement from the Reagan years: 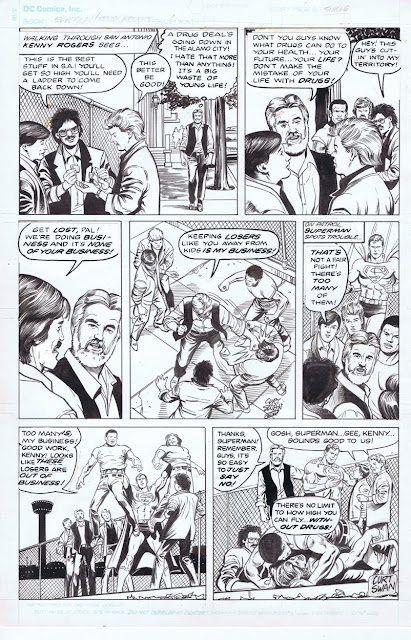 This was from a time when Superman was teaming up with the Nestle Quik Bunny and the Kool-Aid Man had his own special, but I was still surprised to see this one-page team up between the Man of Steel and country star Kenny Rogers. I was even more surprised to see Rogers swinging a mean left hook as he confronted some drug dealers. The signer appears in all eight panels of this story, compared to only three for Superman. Someone's hogging the spotlight!

Another notable thing about this page is that it's presented in black and white, which means that it was easy for me to erase the words in the speech balloons and fill them back in with some nonsense of my own, which I then proceeded to do, because I apparently had nothing else going on at the time. 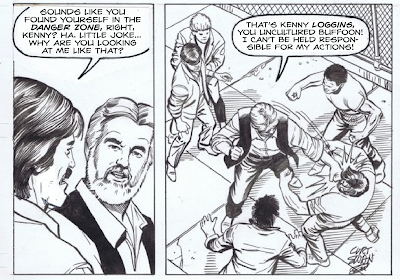 I wanna say that...I like the results. Now Kenny Rogers is an out-of-control murderer who has somehow blackmailed Superman into doing his dirty work. This is a story we didn't know we needed. 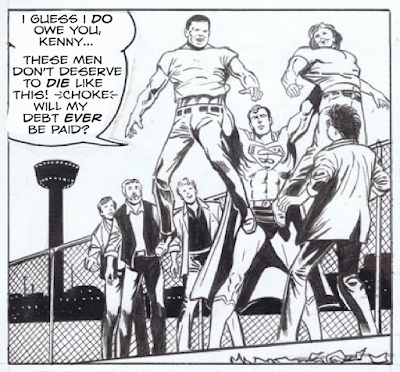 If DC Comics would ever want to hire me to ruin some of their other stories, well, I'd be up for it. Sorry, Curt. 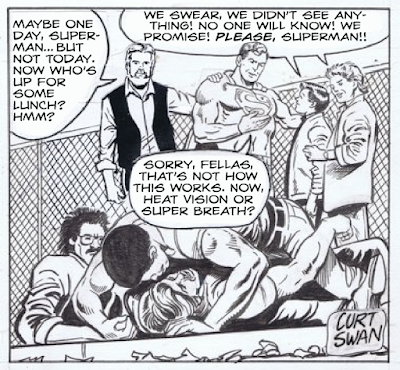