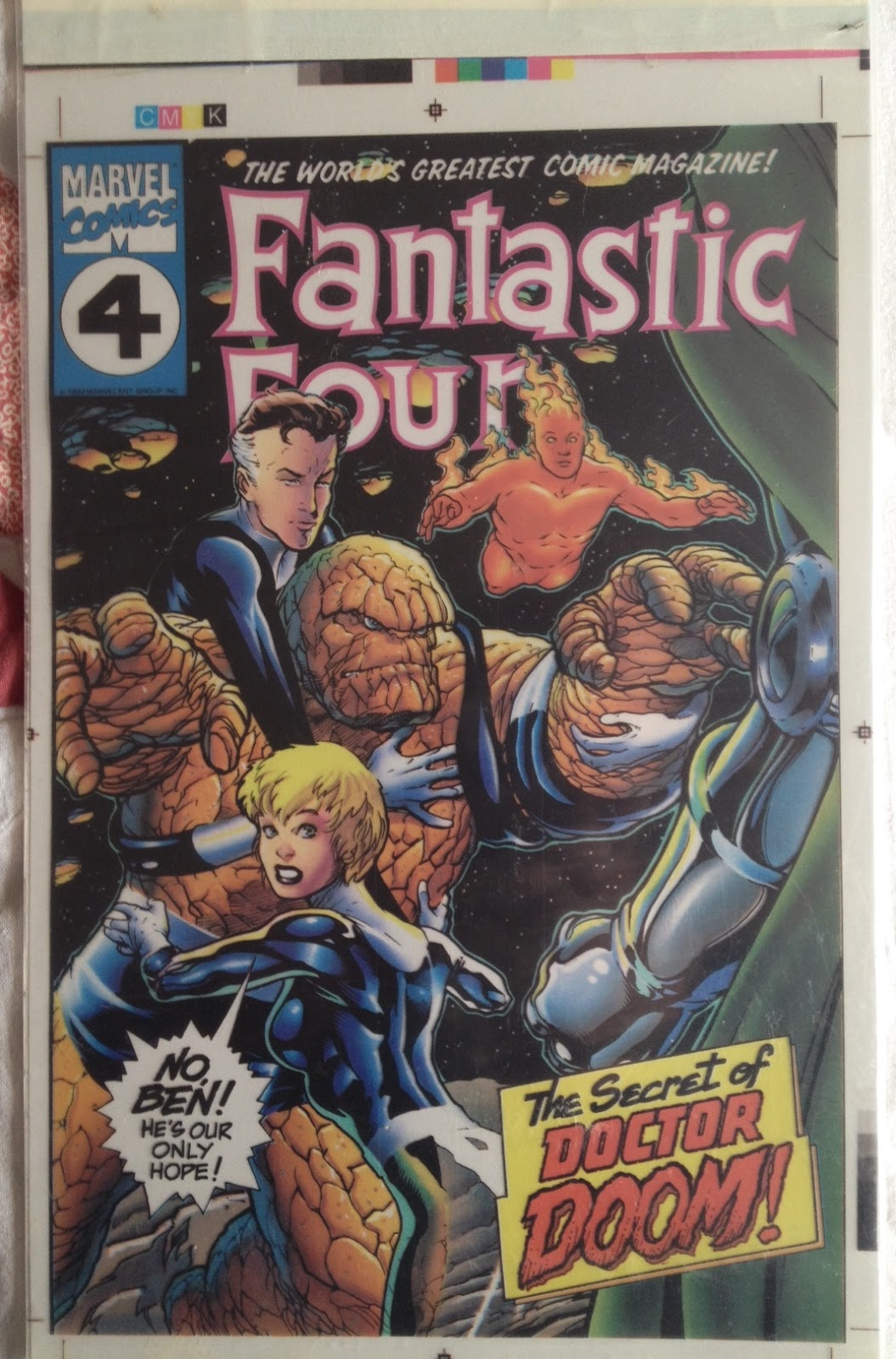 I've found my way to a few items of comic book production art lately.  I enjoy seeing the process that artwork goes through on its way to being a printed page.  I remember seeing the above image a while ago - a few years, at least - and it popped up on eBay again recently.  There's nothing unique about it in that it's a production transparency, made for coloring purposes on its way to the printer, but it's the image itself that caught my eye.  This image, if I'm not mistaken, has never been used by Marvel and certainly never for the cover of a book. 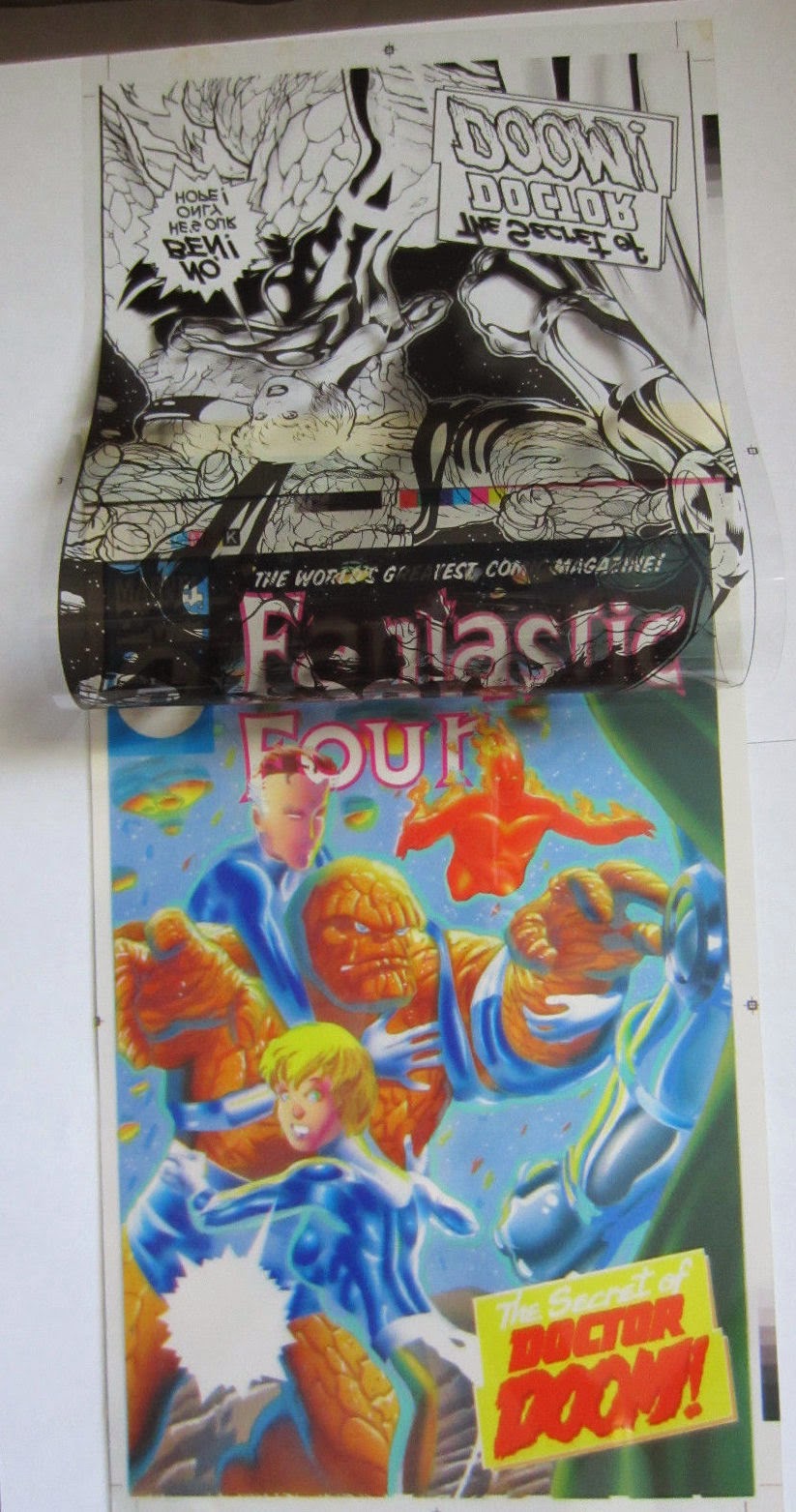 There are several sheets to this item, each revealing a different layer of color.  It's interesting to see everything come together to create a complete image. 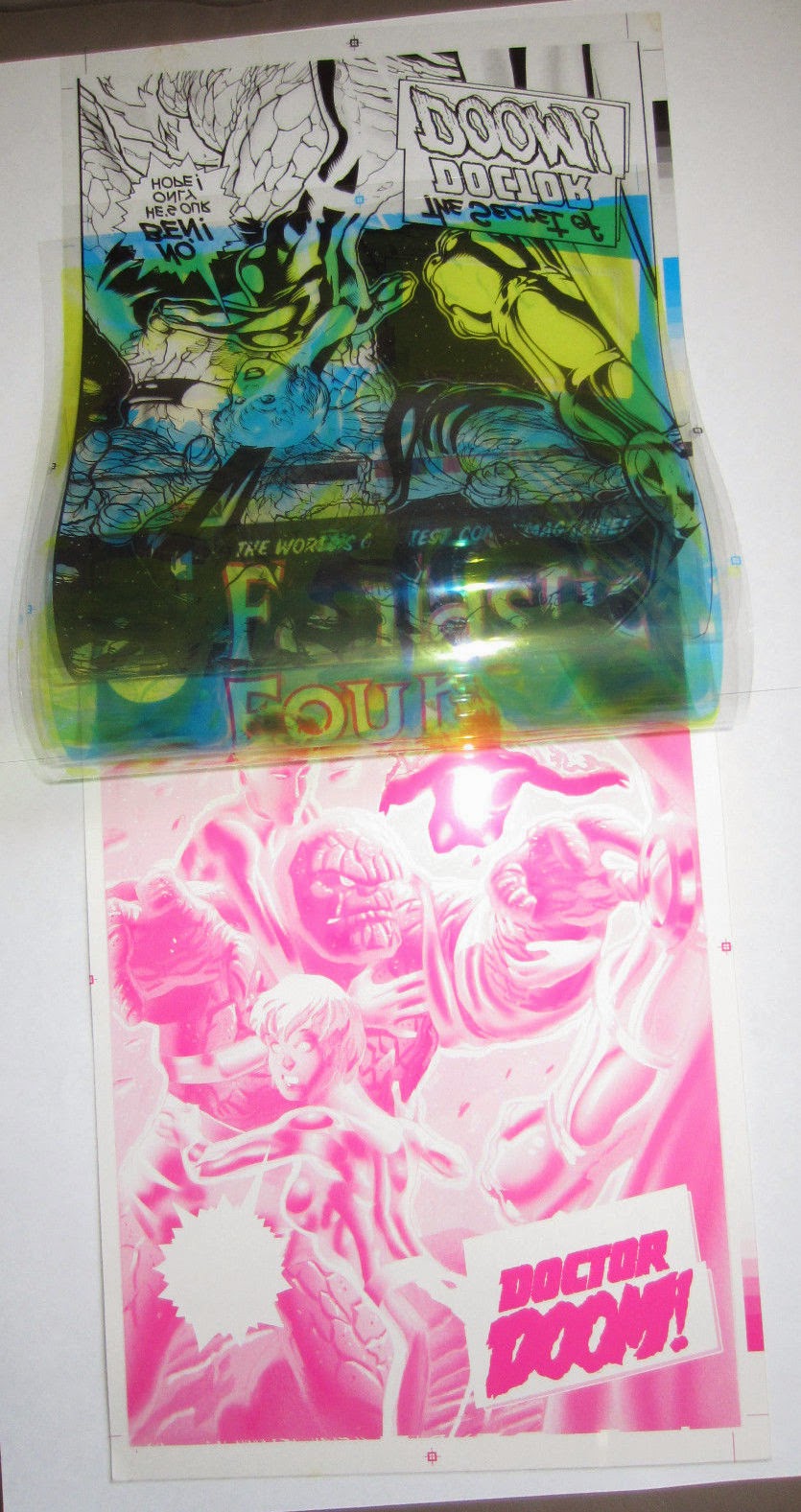 If this image was never used before, then what was its purpose?  "Inventory" stories are not uncommon at Marvel - self-contained stories that were completed and saved in case a regular creative team missed the deadline to go to print - and that is the most likely answer to this question.  Of course, it raises other questions, namely if there was a story that went along with the cover.  Since it made its way to the film transparency stage, chances are that it's not just a pinup that someone did of their own accord.

With this in mind, I took a picture and tried to find out a little more about this mystery cover.  There's no signature on the art that I could see, but it reminded me of that of Terry Dodson, who had drawn this FF cover: 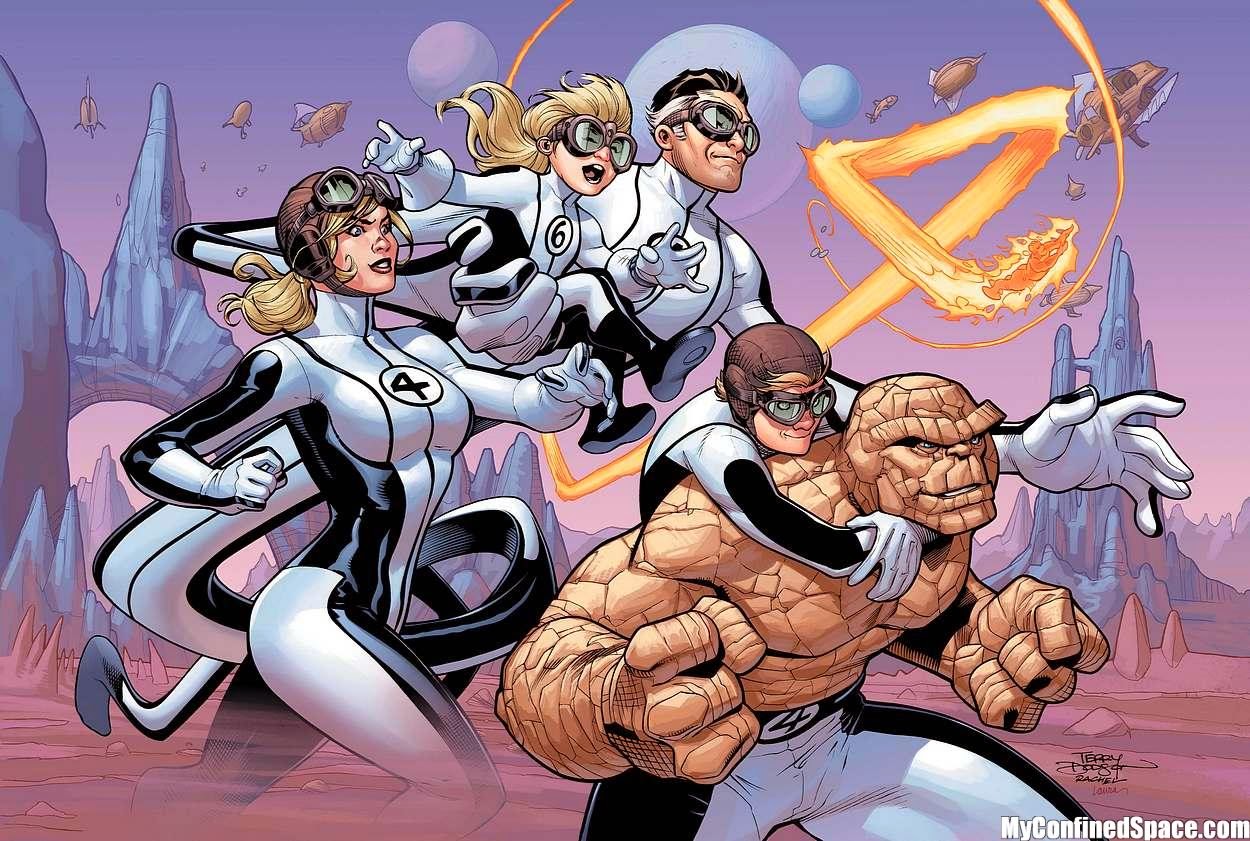 Thanks to the magic of the Twitter, reaching out to people you don't know is easier than ever before, and it was helpful in this case: 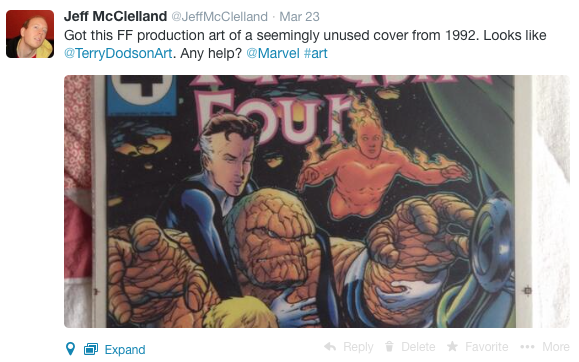 Soon after I had sent the inquiring tweet, Terry Dodson wrote back:

And, of course, he was right.  I don't know why (beyond the similar styles), but I often get art from the two mixed up.  I sent another message on to Adam Hughes, and he replied just a little while later: 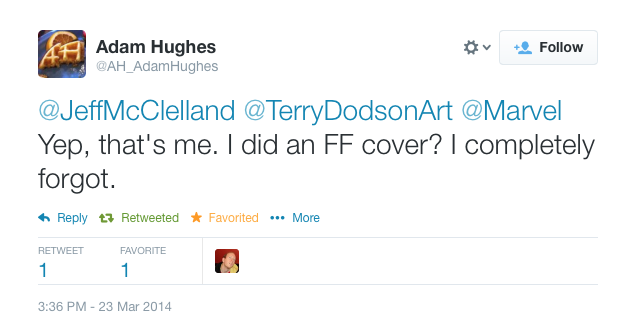 This in itself was a mini-breakthrough, as I now had confirmation on who drew the piece.  The next question I asked was about context - was it for an inventory story?  A poster?  A pinup?  A reply came soon after:

This is a bit of a roadblock, of course.  The next step is to try and contact the editor of the book around the time it was drawn.  The copyright date by the "4" logo says 1992, which was right at the beginning of the lengthly Tom DeFalco/Paul Ryan run.  The two never missed an issue until they were replaced several years later, so if this was for in inventory story, it was never needed.

Who knows if this mystery will ever be solved.  This is a very cool piece of art and it gains even more notoriety since it's never been published before.  We'll see if I can't figure out its origins at some point.

After I found out that Hughes drew it, I found a scan of the original inked art online: 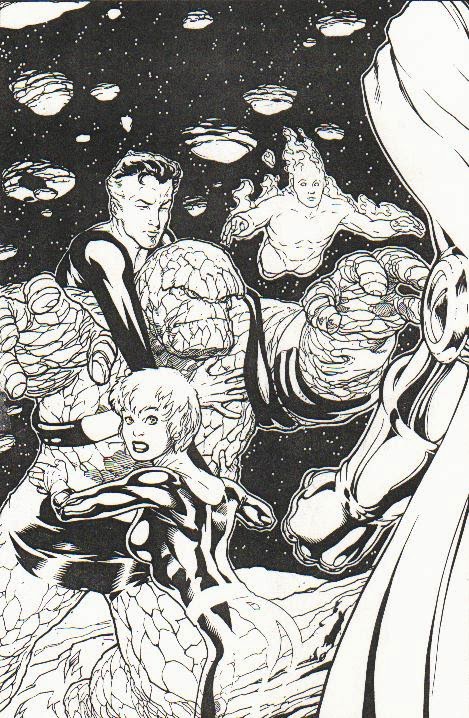 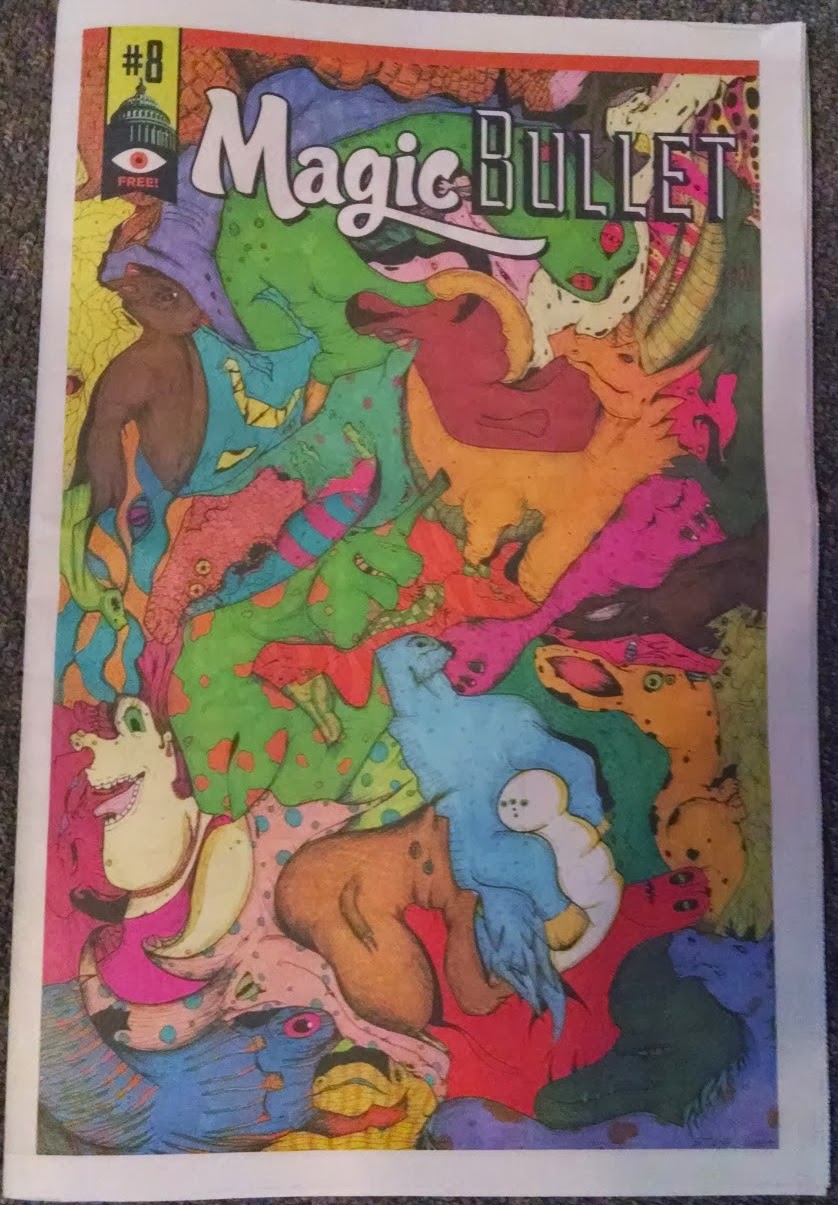 A little while ago, I received some copies of the newly-printed Magic Bullet #8 in the mail!  The Magic Bullet is the DC Conspiracy oversized free comic publication, based out of the nation's capital city.  I've had a few comics published through them in the past, and issue eight is no different.  This issue features, as its first comic, no less, "I Hate the Moon!"  Here's a tiny preview of probably my favorite scene: 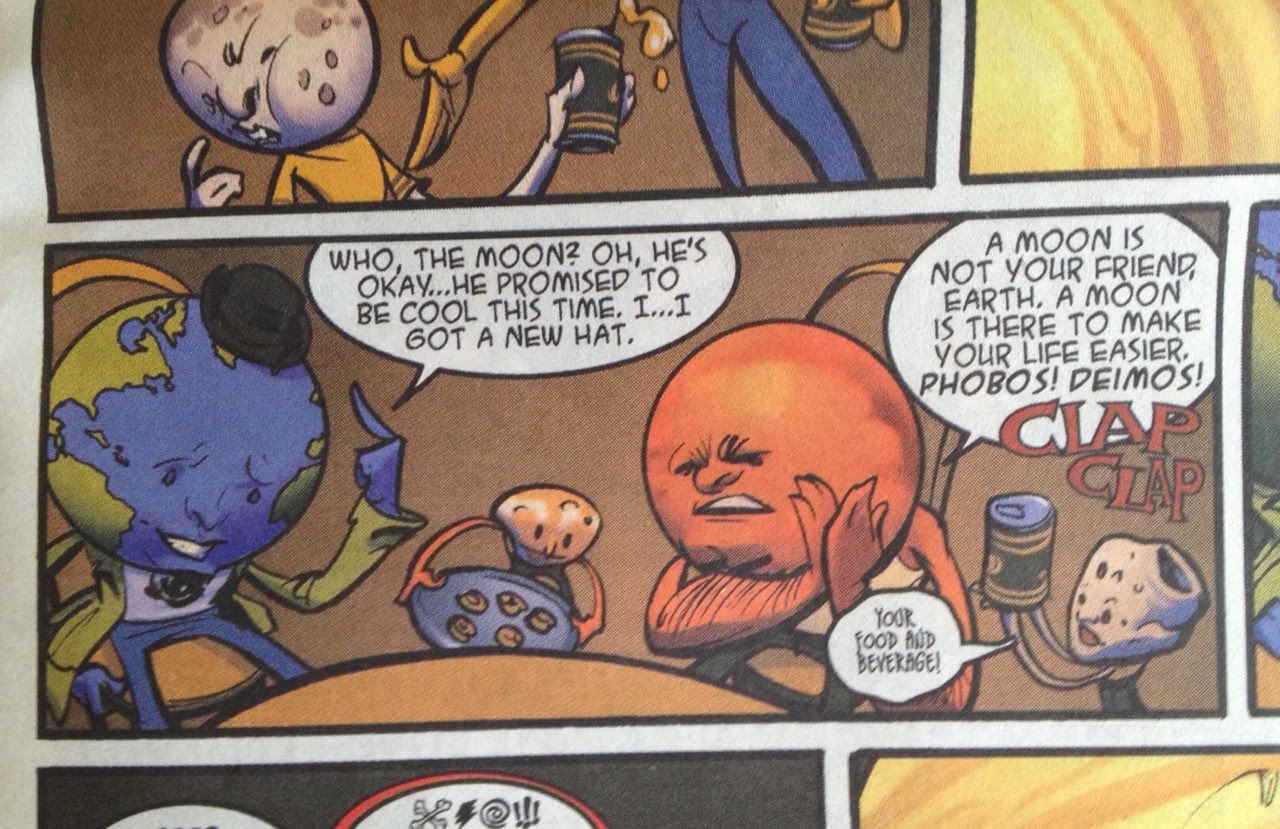 "I Hate the Moon" is, I believe, the fourth comic I've submitted to the newspaper-size publication, but it's the first that I've done in color, which is rare for the MB.  The art for this comic was done by the prodigious Pietro, who took my weird script about talking planets at a party and kicked everyone's butt. 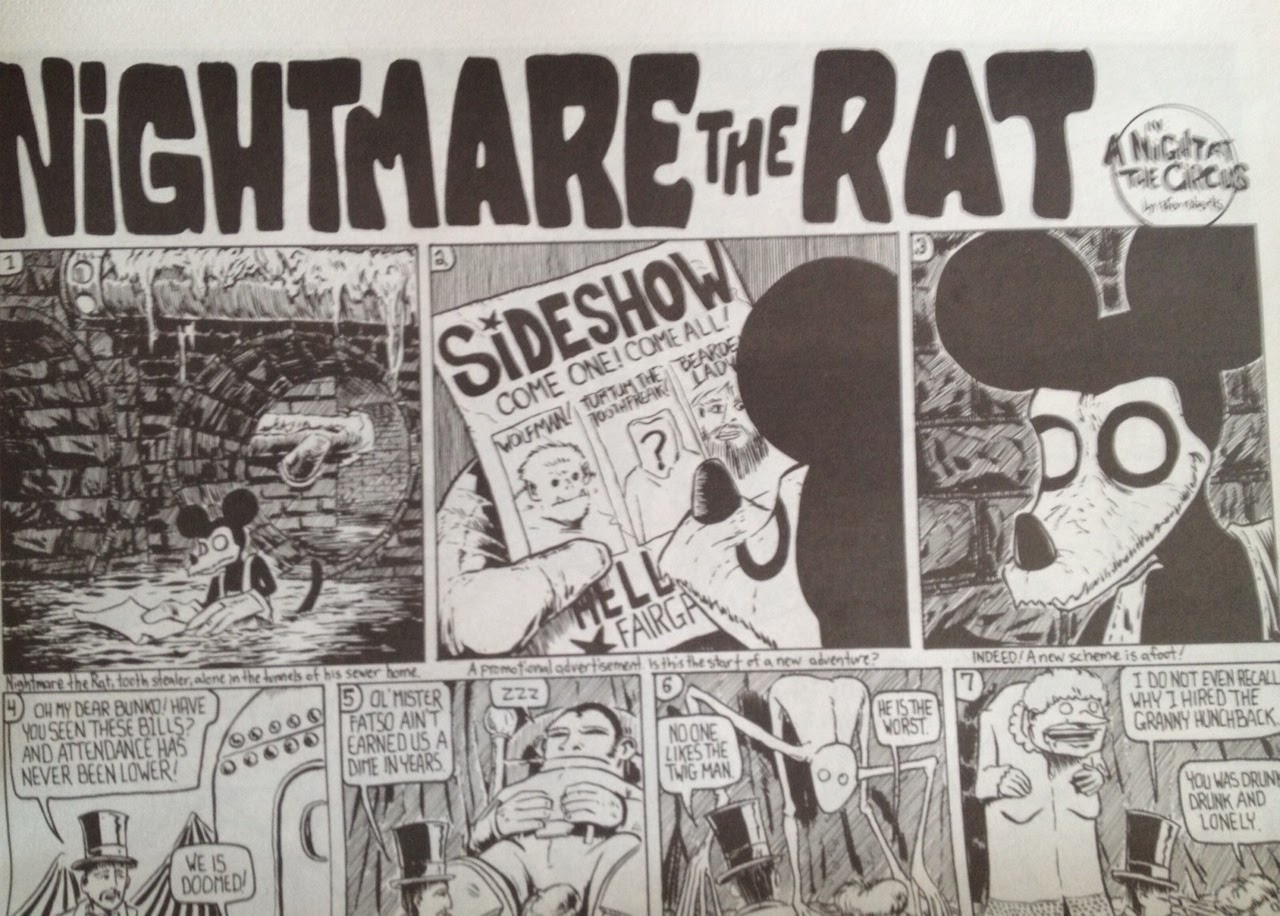 The issue is full of other great, one-page comics as well, including another installment of Rafer Roberts's eerie "Nightmare the Rat". 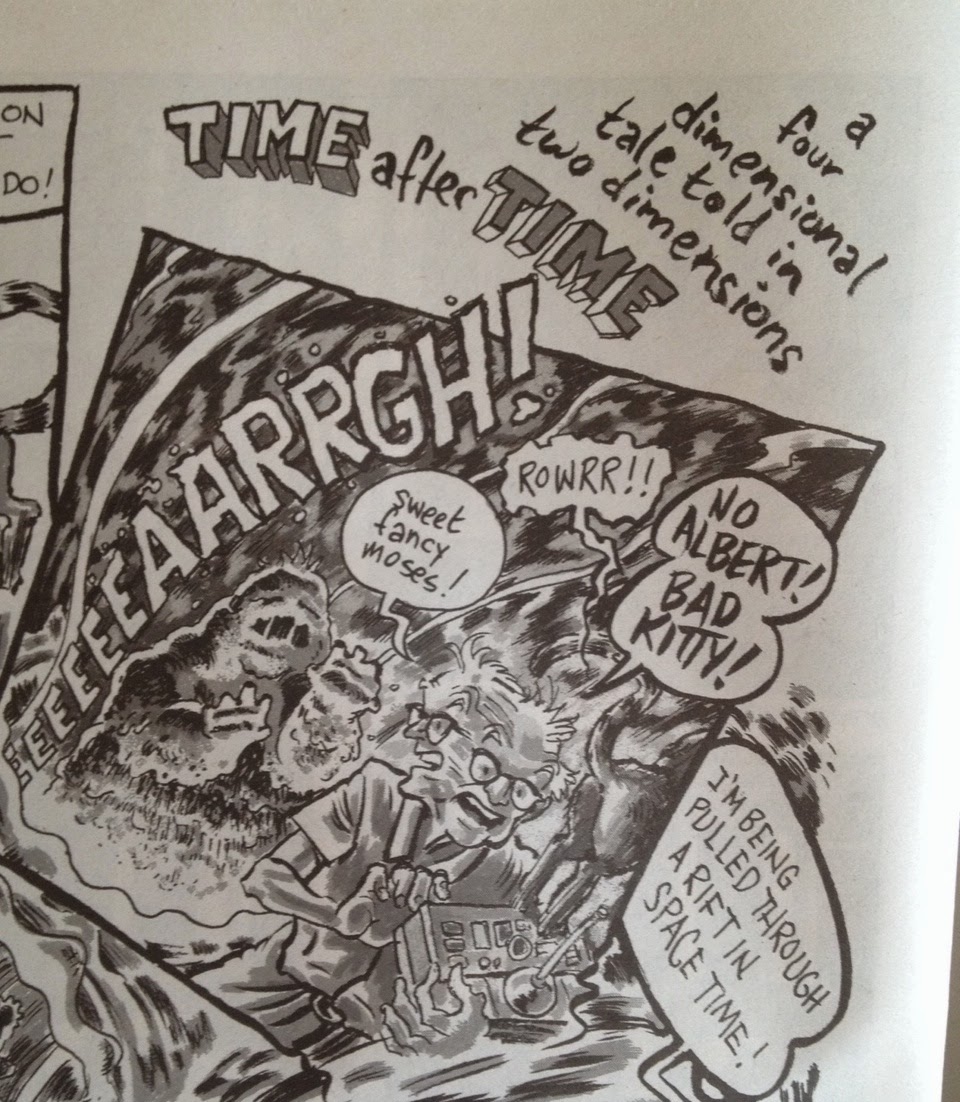 "Time after Time" was another favorite of mine. 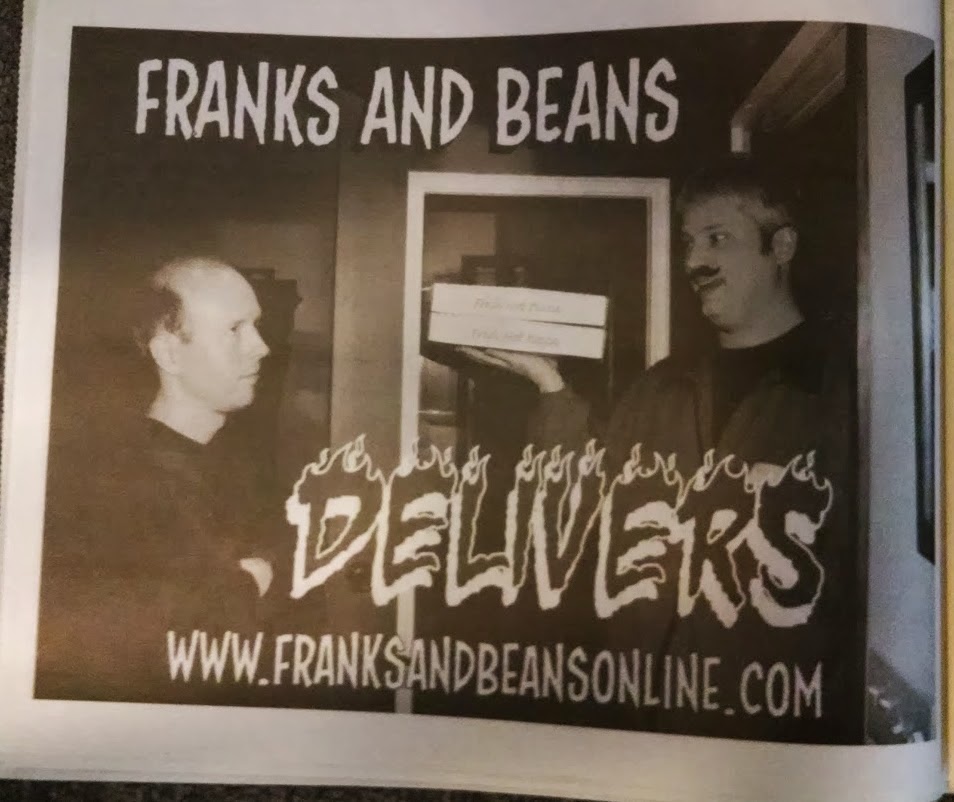 And oh, look!  There's a Franks and Beans ad in there, as well.  This is sure to attract thousands of new viewers. 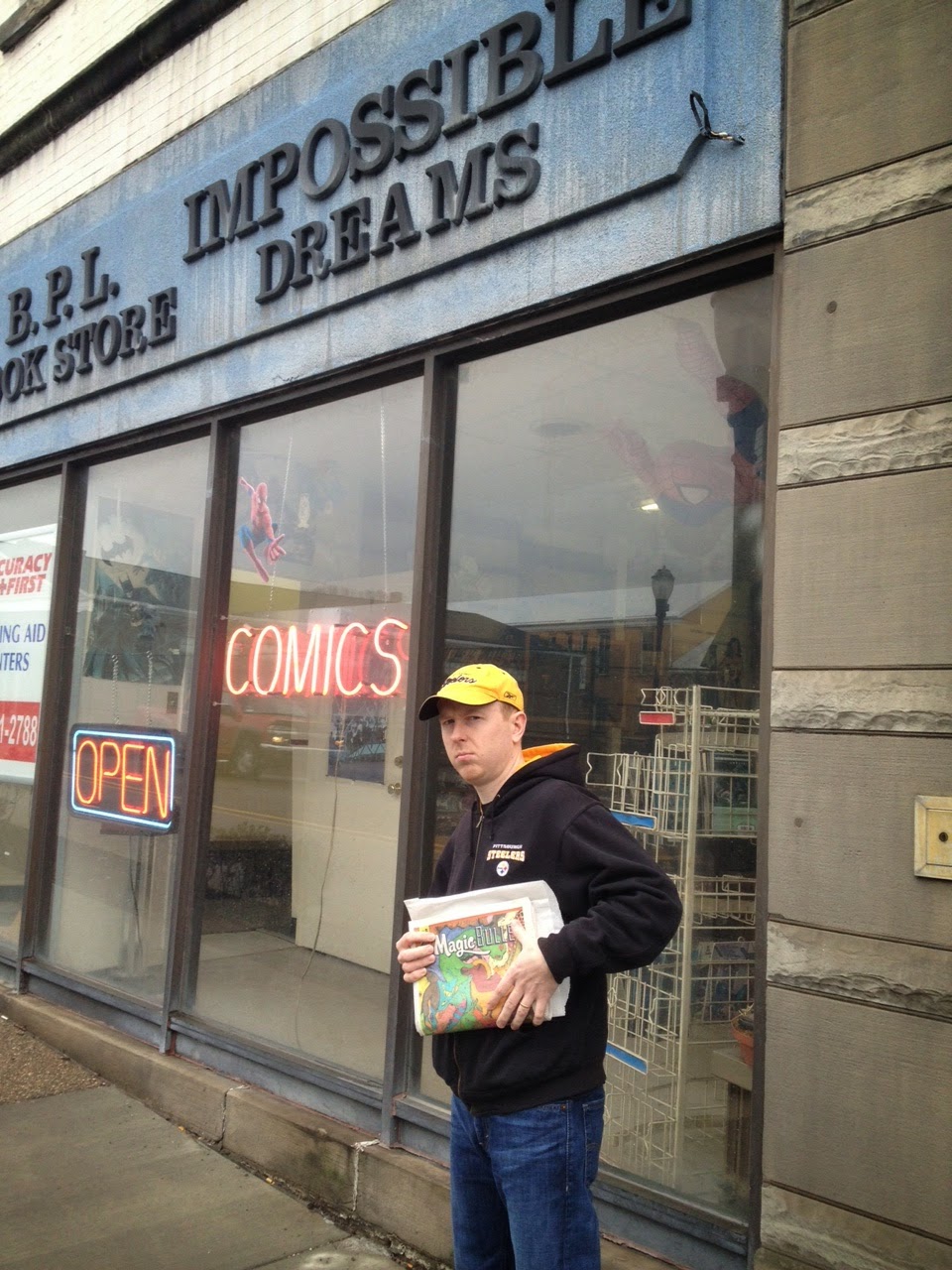 I'll post the entire "I Hate the Moon" strip on this site in a few months.  In the meantime, I took the issue around to a few different Pittsburgh-area shops, including Impossible Dreams in Bridgeville, PA.  If you'd like to grab a copy for yourself and you're out of the area (and also away from Washington, DC, where most of the copies reside), you can order a copy online for only 99 cents!  Click this link for more info: http://dcconspiracy.storenvy.com/collections/170861-all-products/products/5383270-magic-bullet-8

Many thanks to all involved with the Magic Bullet for including me in their great publication once again.  It's always a treat.
Posted by Jeff at 1:52 PM No comments: 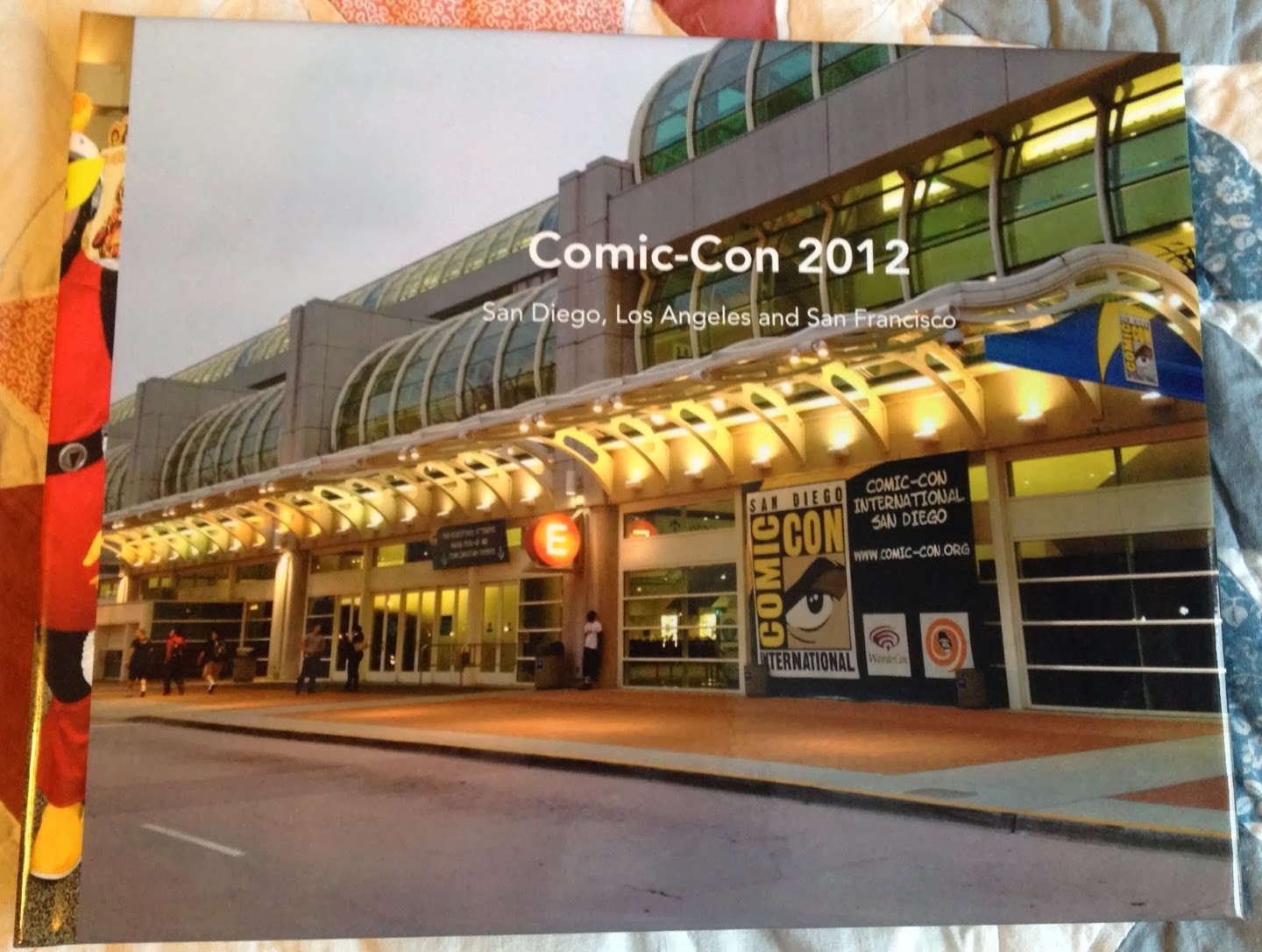 A few months ago, around Christmas, my brother-in-law brought home a book from Shutterfly with pictures of his wedding.  A couple weeks later, my sister showed off one from her recent ski trip to Colorado.  Realizing that I must do what everyone else is doing, no matter what it is or how much it costs, I decided to give Shutterfly a try and put together a book of my own.  I decided that the subject of this book should reflect the event of which I have the most pictures, and that subject is overwhelmingly - even more so than my own wedding - Comic-Con.  So I took advantage of Shutterfly's President's Day sale and created a book filled with images of the oh-so-enjoyable 2012 Comic-Con.  Why not the 2013 Comic-Con?  Because that's not how things work.

A few days ago I got the printed book in the mail and I was so happy with the result that I decided to post an almost altogether meaningless blog post about it, and here we are.  The end result was a professional-looking product filled with pictures of me and the things that I like.  Because of this, I'd recommend Shutterfly's printing services to, heck, just about anyone.

At the top, you see the cover with a picture I took of the San Diego convention center. 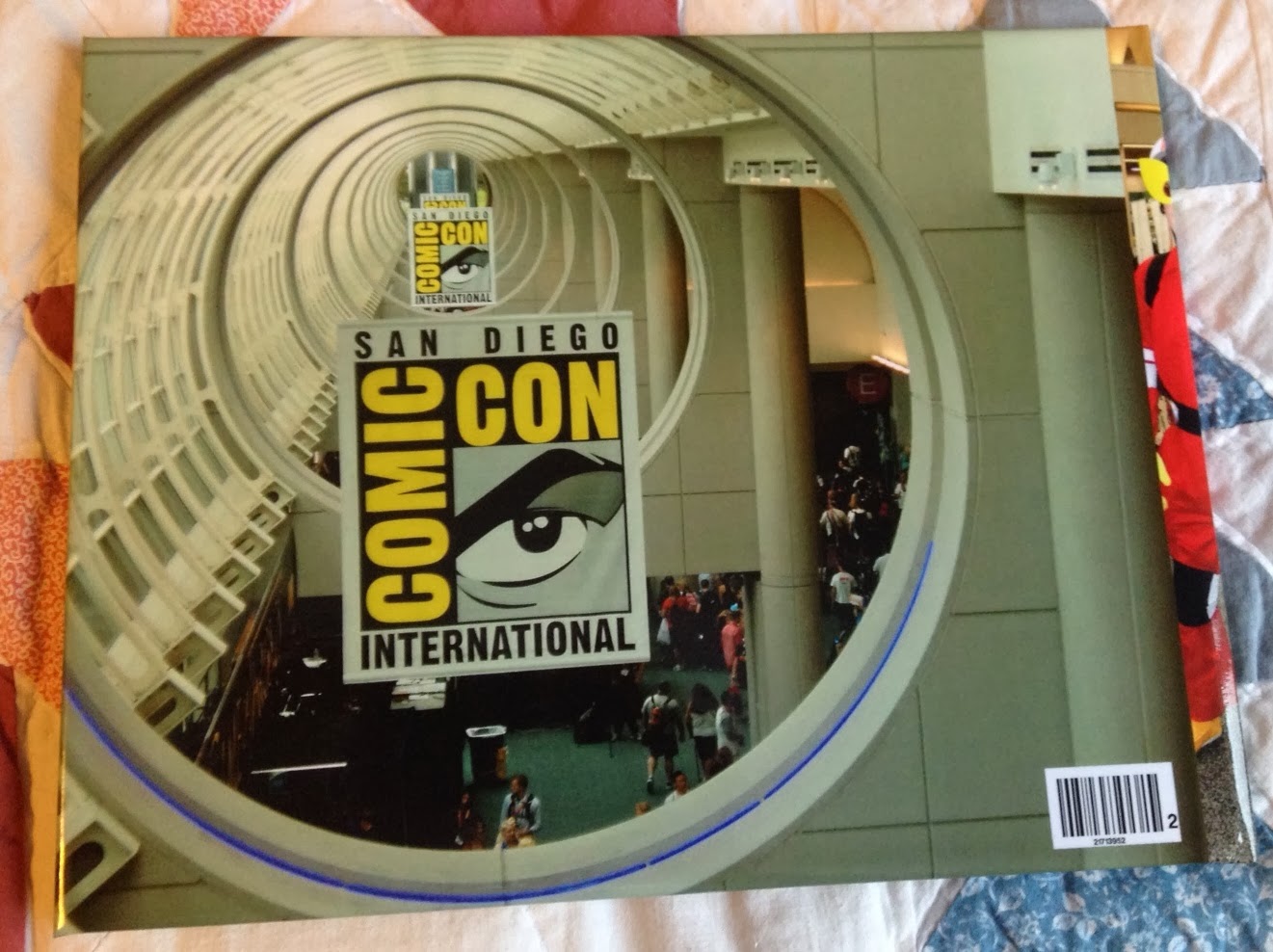 And here's the back cover.  I imagine the subject of the book is pretty hard to miss. 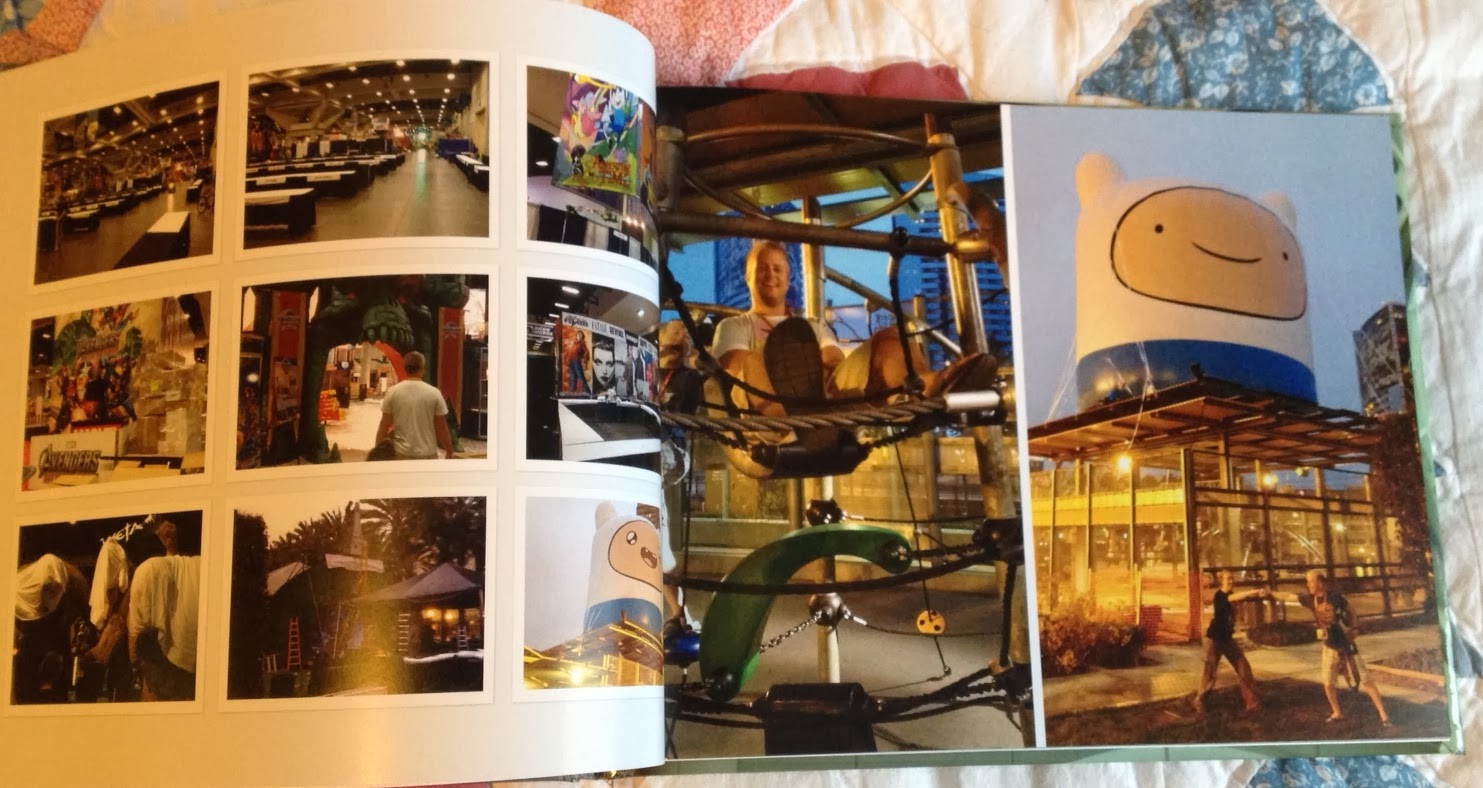 I wanted to take a few pictures of the inside of the book to give an example of how things turned out. Then I realized that I was just taking pictures of pictures and it all seemed kind of silly.  But then I just kept taking the pictures, and here we are. 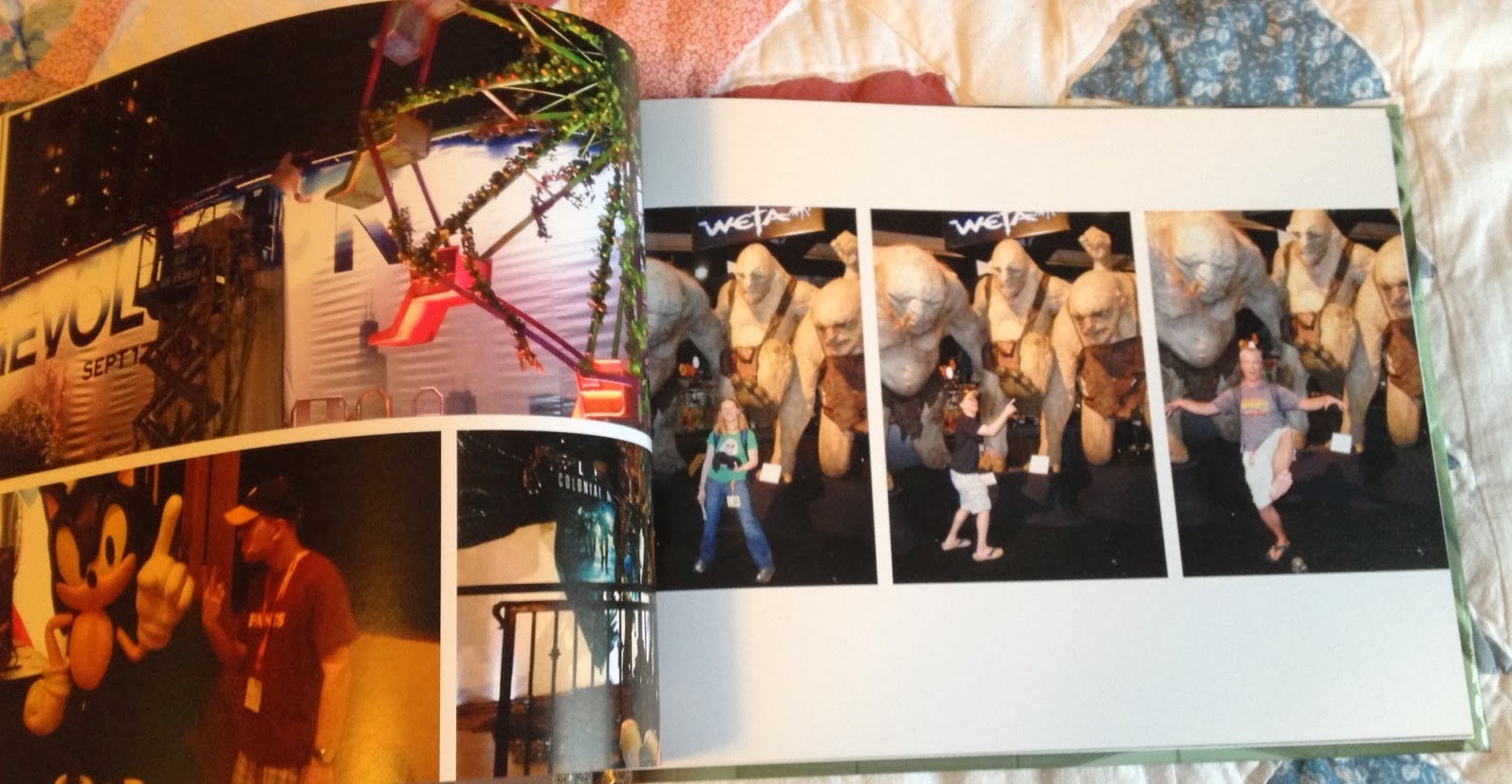 As we can see, there are a lot of images here.  The book ended up being 52 pages and it cost a little more than 40 bucks.  This was after I got a nice President's Day discount and after the book qualified for free shipping.  So I suppose that one lesson to take from this is if you decide to order a book of your own, wait for some good deals. 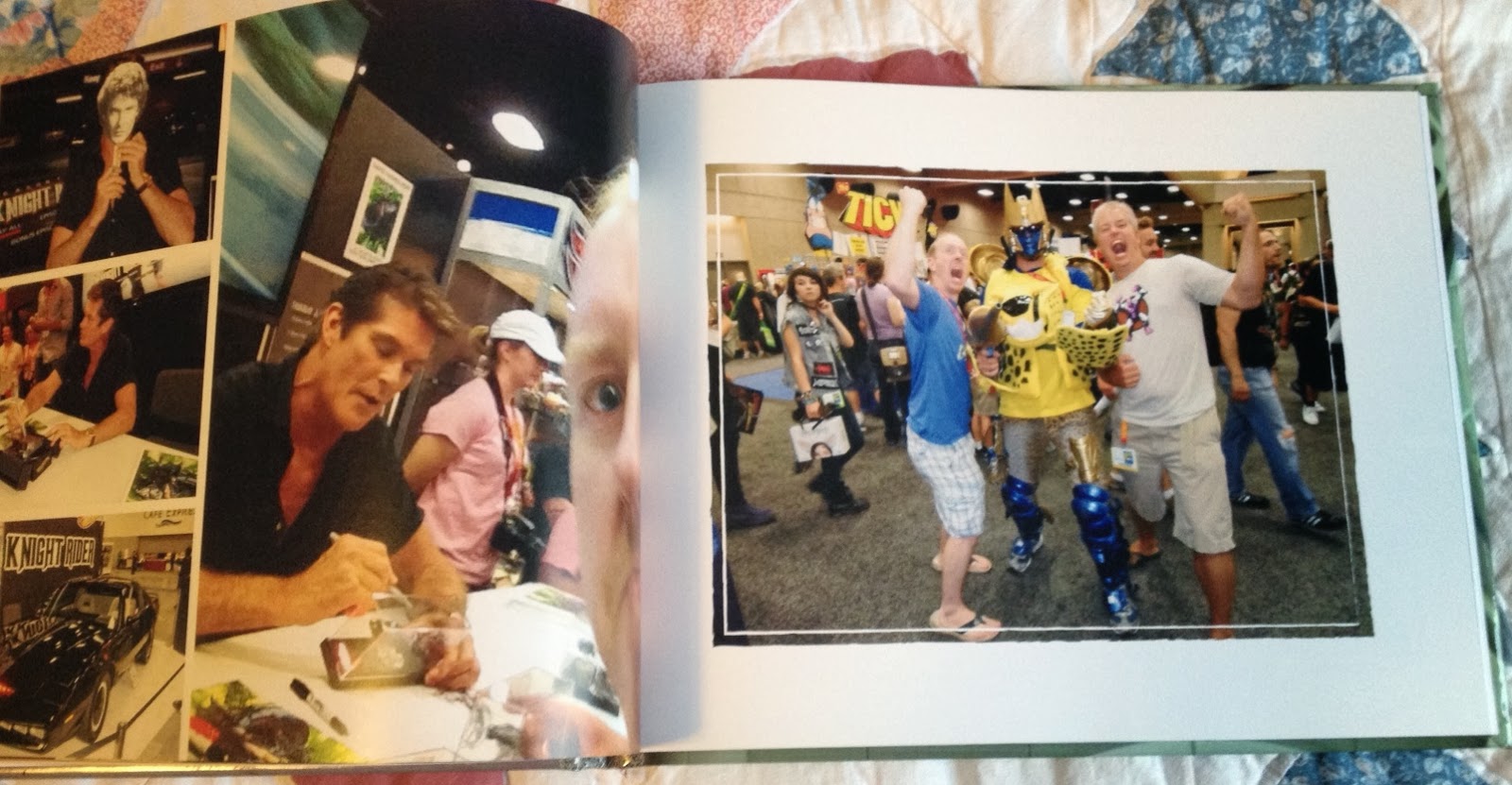 Larry ended up in a number of these pictures as he was, you know, there in 2012. 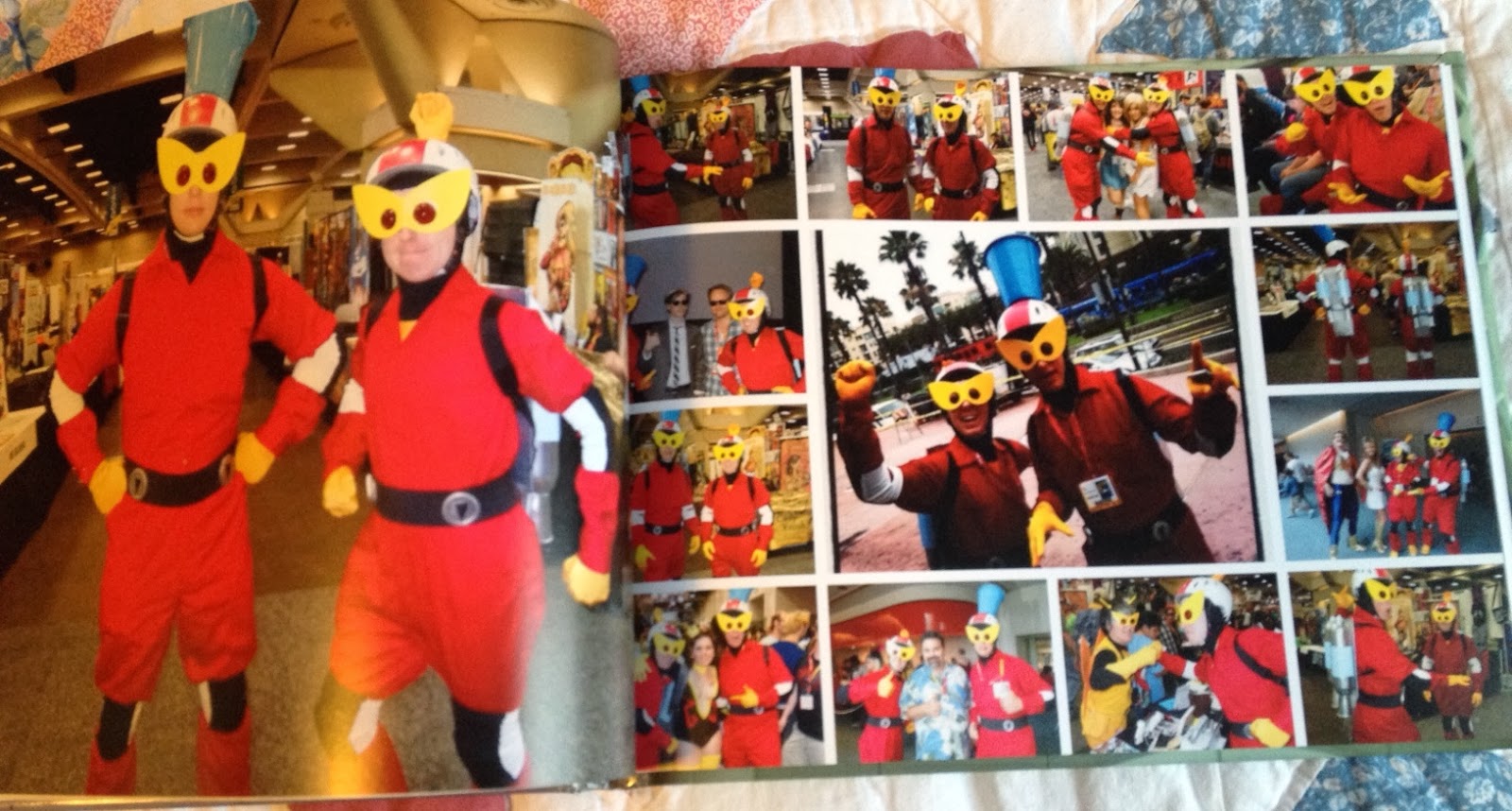 Oh, and here's a big collage of Jet Boy and Jet Girl pictures.  I will never stop showing these to people.

The layout options are many and varied.  I usually ended up throwing all of the many costume pictures I took in these huge jumbles that, actually, don't look too bad. 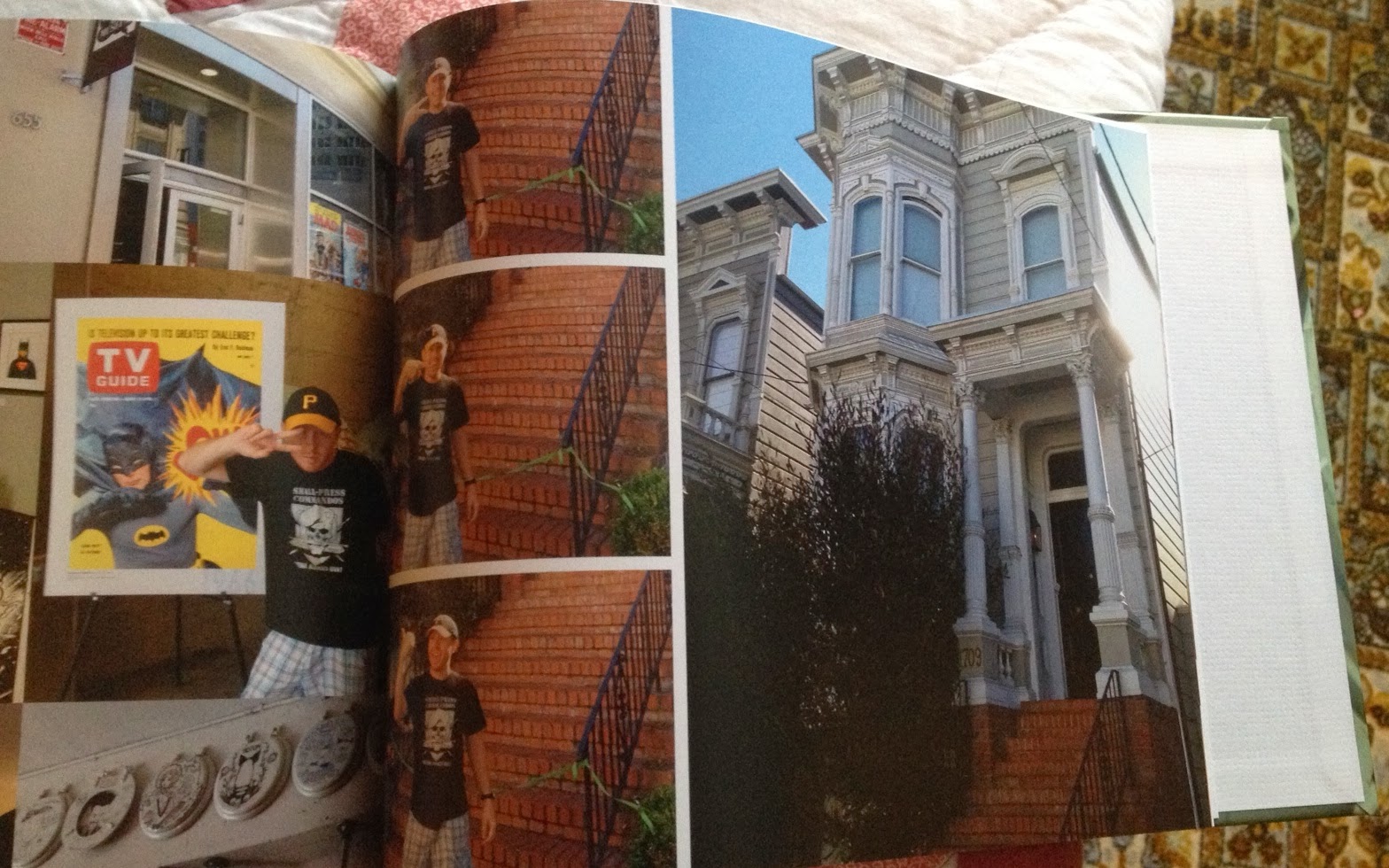 And, yes, the Full House house got its own dedicated page.  Of course it did. 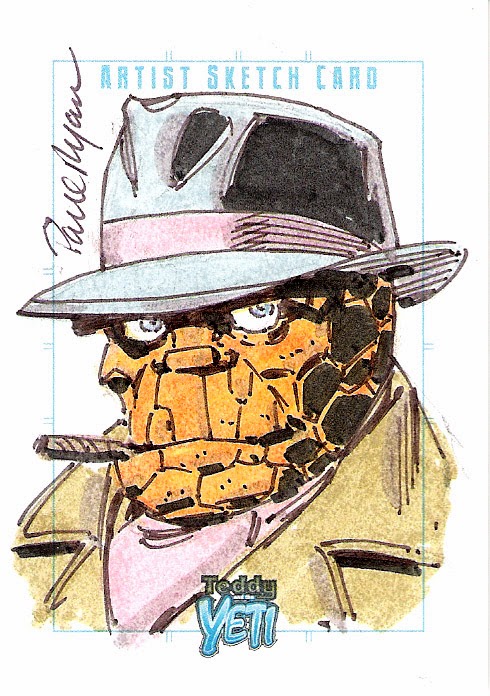 Paul Ryan - Former Fantastic Four artist Paul Ryan is easily my favorite childhood artist.  I started reading comics in the early 1990s and Ryan's art was, month in and out, consistently great.  He didn't miss an issue during his entire FF run!  So it was a thrill to get this sketch card from him.  Ryan was gracious enough to sign some books for me and draw this sketch card after I commissioned him to draw a Teddy and the Yeti cover.  The fact that this is on a T&Y sketch card make it even cooler.  Very happy to have this card in my collection. 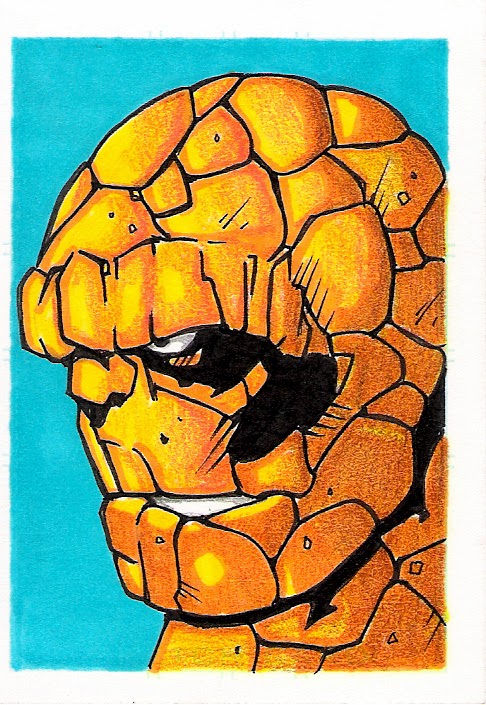 Rob Summers - This eBay purchase comes from Rob Summers, a prolific semi-professional artist who has a keen internet presence.  When searching for information about Summers for this blog, I came up with a newspaper report about a Rob Summers who was shot and killed in an attempted robbery of a Los Angeles comic book shop (http://www.bleedingcool.com/2010/09/04/second-comic-shop-killing-in-lancaster-los-angeles/).  I'm going to just assume that this sketch card was drawn by someone else who happens to have the same name. 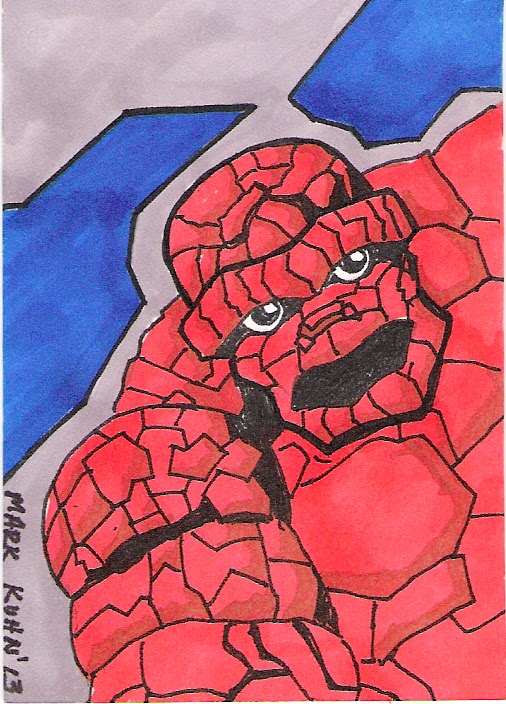 Mark Kuhn - This was another random eBay purchase from early last year.  Thanks, Mark Kuhn! 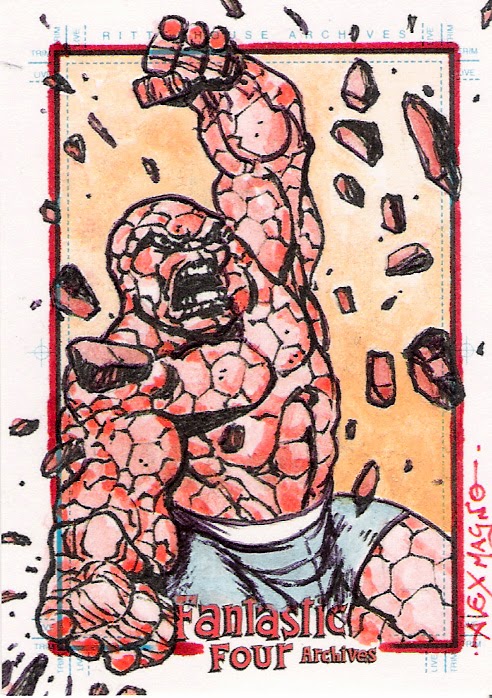 Alex Magno - The Fantastic Four Archives is a trading card set released a few years back.  Since its debut, I've been slowly collecting the series in its entirety, and to complete the collection I knew that I had to get at least one of the one-per-box original art sketch cards.  Of course, I picked one out featuring the Thing.  This one comes from Alex Magno, who drew quite a few original art cards for this set. 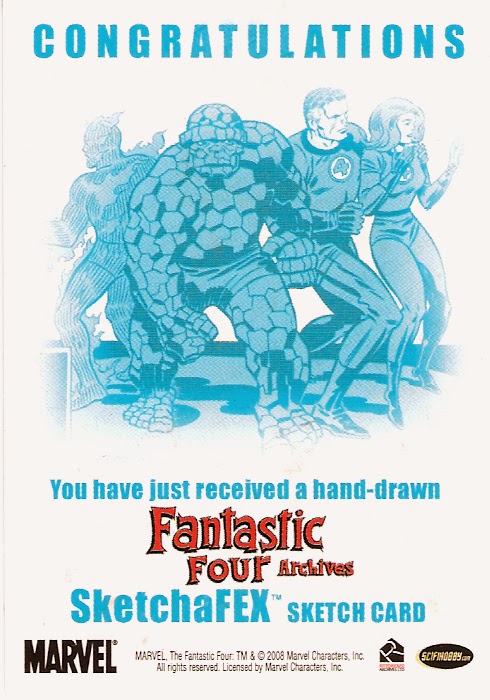 Here's the back of the card, congratulating me on my purchase.  Thanks, SketchaFEX people. 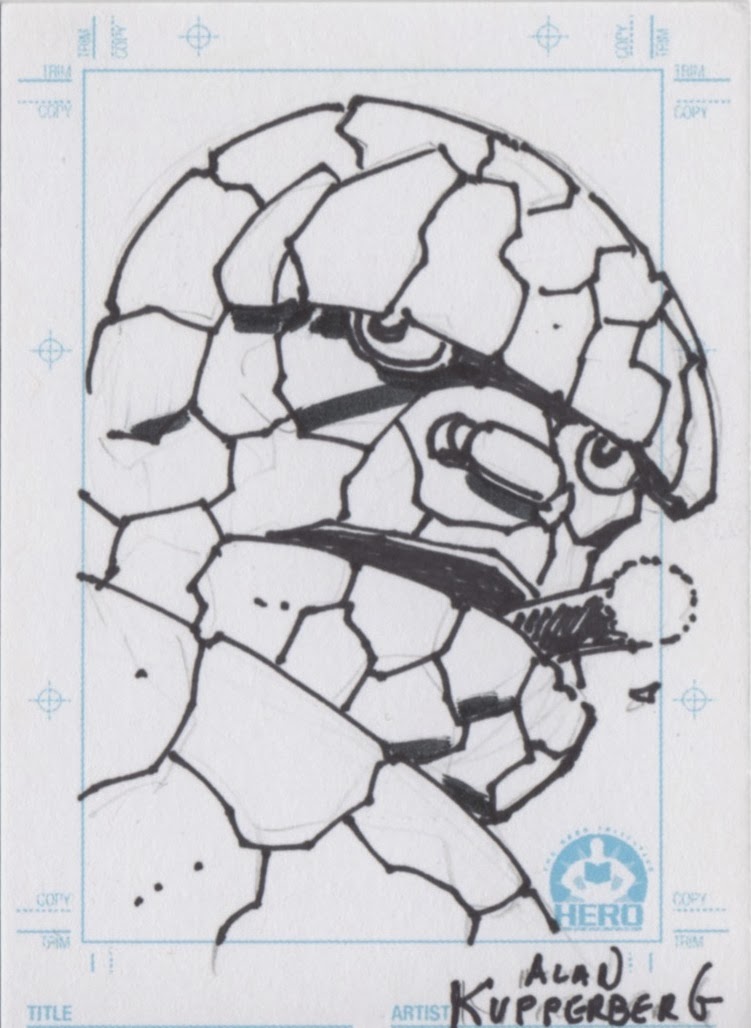 Alan Kupperberg - My most recent acquisition comes from none other than classic Marvel Two-in-One artist Alan Kupperberg, which is a real treat.  I got this card as a reward for renewing my annual membership to the extremely worthwhile comic book charity Hero Initiative.  What a treat. 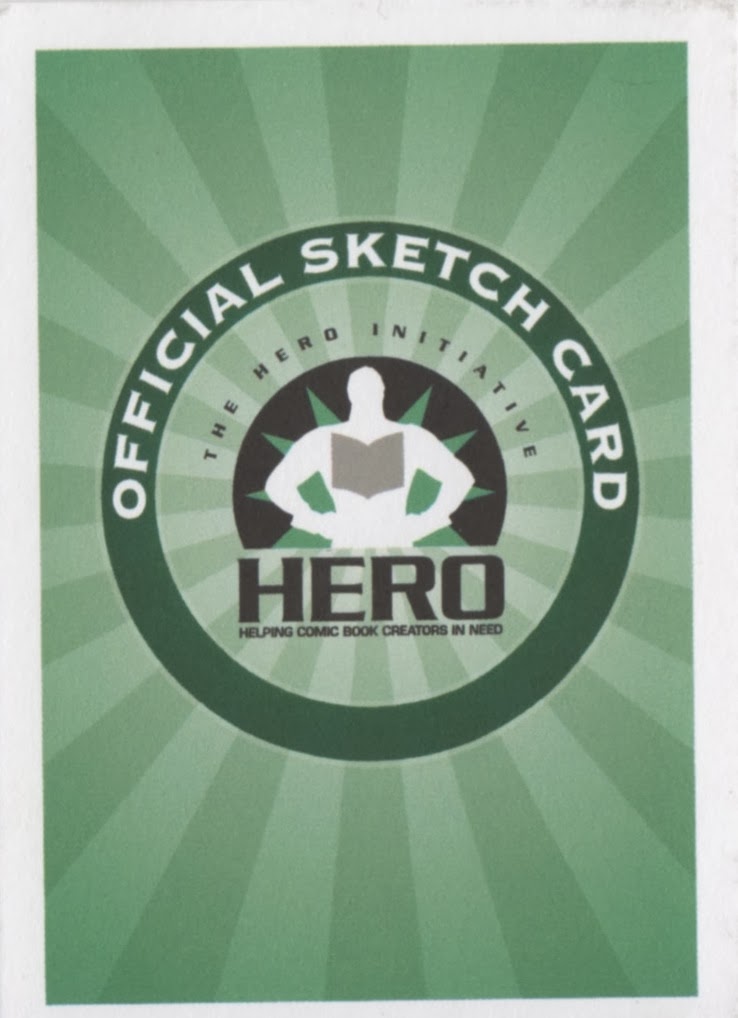 Here's the back of the Hero Initiative card.  Spiffy!

That's actually the entirety of my Thing sketch card collection.  Just posting this makes me want to do an eBay search.  The perils of blogging.
Posted by Jeff at 5:40 PM No comments: