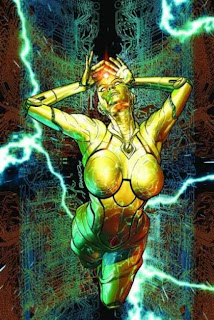 As I've mentioned more times than necessary now, there was a big 'ol comic book sale at the local comic shop here in Wilmington recently.  Boxes upon boxes had books priced at 25 cents each, so needless to say I bought more than a few that I otherwise wouldn't, with some good surprises in the mix.

I had picked up some of the Ultimate Galactus books when they were released - Ultimate Extinction and Ultimate Nightmare, I think they were called - but I never did pick up the sequel series, Ultimate Vision.  When I saw all five books (plus the zero issue) in a row, I snagged 'em without hesitation.
I will say that the story is, overall, worth the time to read it.  It's a satisfying continuation of the story, though there are a few annoying inconsistencies throughout.  Even so, it's a good book.
But, all right.  The question you're asking once you've seen the picture posted at top is, "why does the Ultimate Vision have giant robot boobs?"  And you are right to question this.  I mean, I understand that the main audience for comic books is male, and I, like many other men, like boobs and women in general.  But there has to be a line drawn somewhere, and I think that this is it.
The main character of the book is A ROBOT.  Yes, I get that this robot has been given a fairly human figure.  And seeing as that figure is feminine, it makes sense that it might have some semblance of robot breasts, functional or not.  But why the double Ds?  Not only does this robot have robot boobs, but they are too big to possibly fit into any sort of robot bra contraption.
I wish they had some purpose other than to get people to buy the book.  I wish little propellors came out of them and gave the Ultimate Vision the power to fly or something.  Anything better than a robot pinup.  That's just weird.
Posted by Jeff at 11:34 PM No comments: