Karin Rindevall's Teddy and the Yeti, The Din and more! 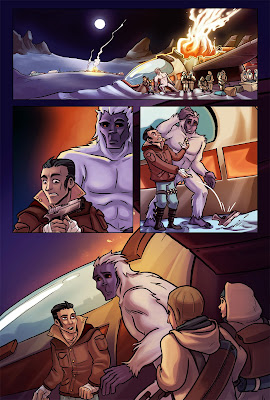 If you've followed this blog at all since it started up in 2008, the name Karin Rindevall won't be an unfamiliar one - the Swedish artist has been a contributor to Teddy and the Yeti, Andromeda Jones and other various projects since the beginning.  It's hard to even remember the exact circumstances under which we met...I'm sure it was a generic Digital Webbing ad in some context or another, but in any case, Karin has been a major help with a number of my comics and she does a heck of a job on her own work as well.

Karin has been hard at work on a number of projects recently, not the least of which, from my perspective, has been a new, four-page Teddy and the Yeti story that will run in issue #6.  The first page from this story is above, both drawn and colored by Karin.  Her distinctly European, animation-influenced style is on display and in great form with this page, and I couldn't be happier with the results.  I'm not even sure how to letter this story yet - if I should try it myself or opt for a hand letterer, one who might mesh better with the artwork at hand. 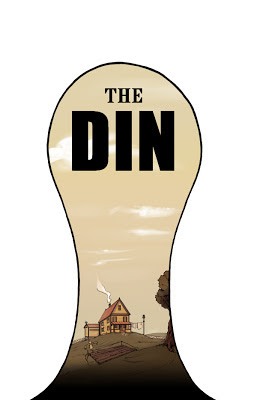 Karin, who works in animation and game development, also puts together the webcomic "the Din", a story about a civilization in which all technology has been abandoned hundreds of years in the past.  In the Din, society is slowly reinventing itself as it reintroduces new machines and other technology into its midsts.  It's a fascinating read and, while some chapters are under construction and the story is far from finished, it's well worth the time it takes to check out.  The webcomic is housed at http://www.dincomic.com! 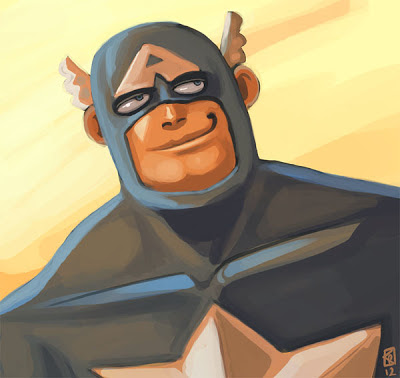 Karin's also got a blog that she updates regularly where you can find smilin' Steve Rogers as well as other gems.  Take a look and enjoy at http://www.karrey.com!
Posted by Jeff at 11:28 PM No comments: 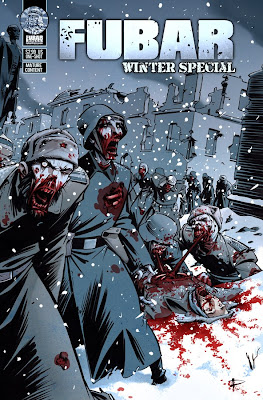 Happy Thanksgiving, everyone!  It's been a while since I've posted, but I promise, it's been because of other productive activities...and this time it's even comic related!  What a shock.

Quick, think of something that gets bigger and bigger every day!  Well, yes, "your mom" is an acceptable answer.  But also FUBAR, the comic that keeps on coming.  The success of this book continues to amaze, and it's something I'm proud to be a part of.  After this year's Empire of the Rising Dead graphic novel and the well received Summer Special, things have really been picking up steam to the point where 2013 is shaping up to be a banner year.

Above, you'll see the cover to the aptly named FUBAR: Winter Special, due out in January and in the "monthly" format that we all know and love so well.  Adorned by another beautifully rendered cover by Pietro, the Winter Special features stories by Chuck Dixon, Jeff McComsey, Steve Becker, and me. And a few other people.  It's gonna be great. 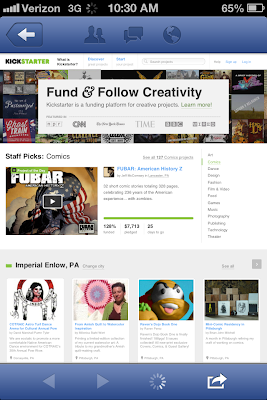 The FUBAR: American History Z Kickstarter campaign has been an unqualified success that I don't think anyone could have predicted.  With nearly two weeks left to go, the book has raised more than double of its fundraising goal and has just passed the $13,000 mark.  Who knows where it'll end, but it was certainly helped along when it was showcased on the very front page of Kickstarter as a staff pick, as you can see in the screenshot above.

Reaching seemingly unattainable goals means the unlocking of pretty decent "stretch" rewards, and FUBAR does its best to impress with the announcement of a brand new one-shot title: FUBAR: By the Sword, a medieval anthology that's in its very infancy, but already has a beautiful cover by Steve Becker: 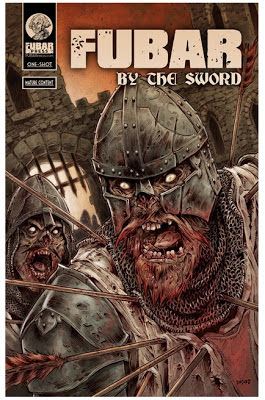 This book further expands the FUBAR universe and will keep us all busy well into next year.  I'm already thinking of potential story ideas, and I'm doing my best to try and not let Games of Thrones influence me too much.

These things all add up to an exciting year ahead, but there's even more to come, and dare I say the most exciting news of all is still to come.  In the next few weeks, there'll be an extra special announcement from the ranks of FUBAR Central Command that'll really blow the doors off their hinges.  It's definitely something to keep an eye out for.

Blogger is now telling me that I've reached my quote on pictures for this blog.  To which I can only have one realistic reaction: PANIC!  I had no idea that there was a limit on the amount of images one could upload to a Blogger account, but apparently there is, that number is 1GB, and I've reached it.  What to do?  What to do indeed.  I guess we'll have to wait and see.
Posted by Jeff at 2:06 AM 1 comment:

Who doesn't like reading a little bit about a lot of different subjects?  No one, that's who!  Plus, I have a number of blog related pictures cluttering up my desktop, so it's time for another rousing edition of random notes!  Please hold any applause until the end. 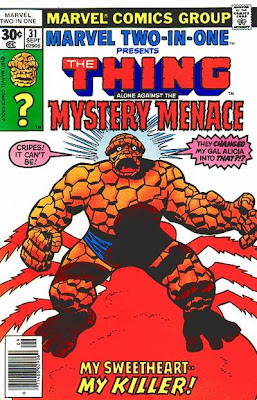 - A couple links have come my way in the last week or two that are worth sharing.  The first is the Cyberspace Comics Blog, which covers a lot of topics, and one that is of particularly interesting to me.  The blog is in the process of providing in-depth commentary on every single issue of Marvel Two-in-One, including all crossover titles.  This is a herculean task to be sure and it takes a real Thing fan to accomplish something like this.  I myself am working my way through every issue of MTIO (plus the crossover titles), and I'm now around issue #80.  Two things of a few that I've taken from the series: first, the Thing is awesome.  Second, there are some tough issues to get through.

- Sean Kleefeld's always interesting blog had a post recently about why old comic books smell the way they do.  The answer isn't shocking by any means, but it's still a good read, with some insight on the printing process for new books, too. 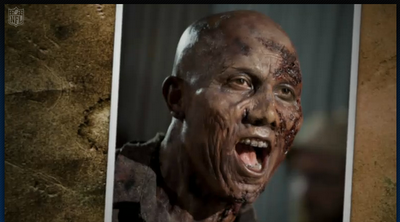 - Well, the Steelers won again yesterday.  After some early season struggles, the team is rounding into form and on their way to taking the division from the hated Baltimore Ravens.  And because even retired Steelers are more newsworthy than than anyone on the Ravens team, the NFL put together a story about Hines Ward and his guest appearance on the Walking Dead!  Oh, Hines.  I miss ya.  If a receiver gets hurt down the stretch, I wouldn't mind resigning #86 for a lengthy playoff run.

And speaking of Super Bowl MVPs, I got this five dollar bill as change a few weeks ago.  The writing at top says "My 1st lost bet - maybe next yr...Super Bowl XL".  Why Super Bowl XL was won by Hines Ward and the Steelers!  And this joker bet against them?  That's what you get, Tess.  After scanning it, I put the bill back in circulation so someone else could experience the joy/misery.

- The blog has been enjoying a pretty steady upswing of late.  The big spike you see at the right took place the month surrounding Comic-Con.  Afterwards it came back down to earth a bit, but the numbers are still better than any point before the convention.  I'm glad that more people are enjoying the blog, or at least the pictures of Spider-Man I post.  I'll take what I can get. 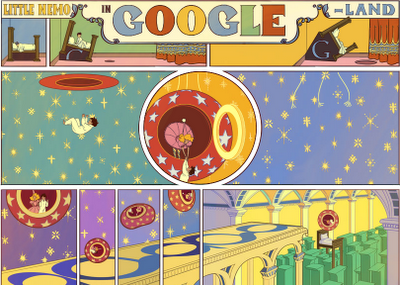 - I'm sure we all saw the amazing Google doodle a few weeks ago celebrating Winsor McCay's birthday and his Little Nemo comic.  I'm also sure that Google doesn't need any more good press.  But I'm giving it to them anyway. 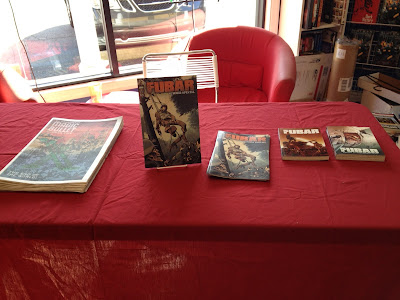 - A long, long time ago, I did a signing for the FUBAR Summer Special at Pittsburgh Comics in McMurray, PA, always a fun time.  I'll be doing another signing this coming Sunday (don't worry, the Steelers play on Monday night) for the Pittsburgh Comics & Collectibles show from 11:00-5:00.  You can get more details here! 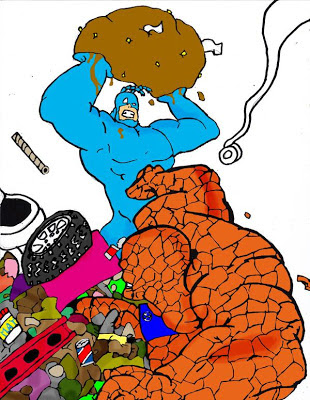 - Google, as a matter of fact, is good for more than just looking up how to spell "Winsor McCay".  A quick image search revealed some images of two of my favorite comic characters - the Thing and the Tick - embroiled in daring combat!  The first one looks like it takes place in a garbage dump.  Okay. 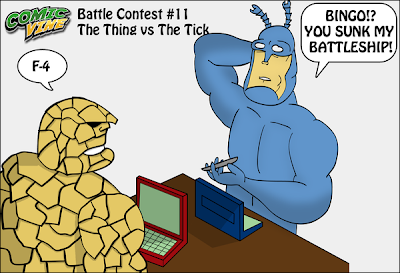 And the next is more of an intellectual battle, I guess.  Neither of these two compare, though, to Steve Rude's battle royale between the Tick and Space Ghost! 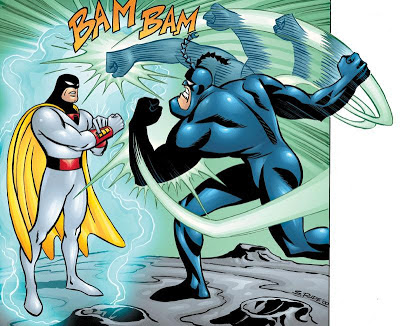 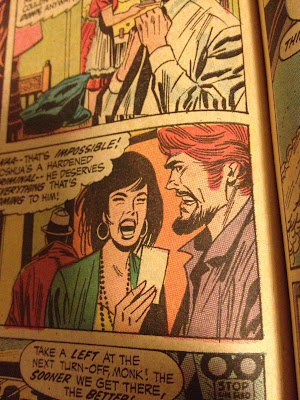 - Dr. Doom co-starred in the first eight issues of Astonishing Tales (not to be confused with Tales to Astonish), which means that I had to buy and read all of them, as per my particular psychosis.  Within issue #8, I found the above image, and I thought to myself, "it really looks like that red headed guy bought his beard from the fake beard company that used to advertise in comics."  And then, a few pages later, I saw this: 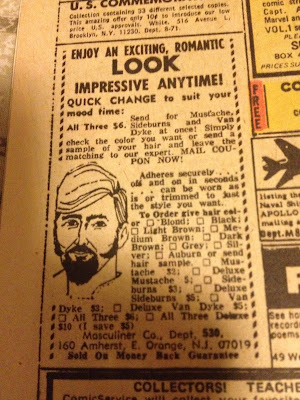 It must be true!! 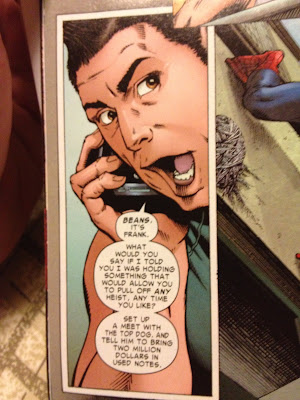 - Proving that Internet sensation show Franks and Beans was right to choose such a culturally relevant name, I present a panel from this month's Avenging Spider-Man annual #1, featuring a good old fashioned team-up between Spidey and the Thing. 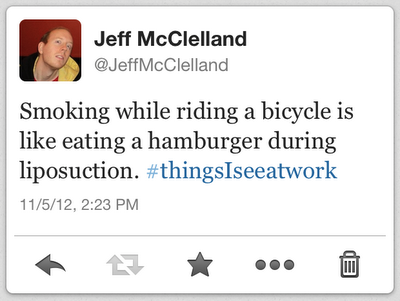 - Lastly, I have a Twitter account!  This may either increase or decrease your hatred of me (I'll deal with it).  If you'd like, even in the least bit, to hear clever witticisms such as the one above perhaps two, three times a week, feel free to follow me!  My Twitter name, which should throw off all stalkers and yet convince followers of the veracity of my account, is @JeffMcClelland.  Or you can just go to my page here: https://twitter.com/jeffmcclelland.

See you next time!

Happy election day!  Here's a picture taken by a friend from the area: 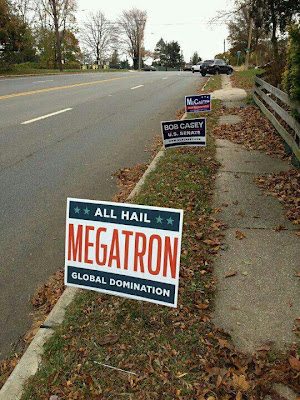 Brilliant.  Megatron promises, I'm told, unprecedented change.  Mostly into the form of a much smaller gun that other Decepticons can carry and shoot.
Posted by Jeff at 12:54 AM No comments: 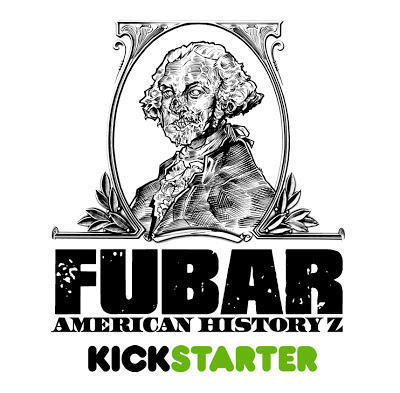 You know that the next volume of FUBAR is around the corner when you see the latest Kickstarter fundraiser online.  This volume is the most ambitious yet and, dare I say, it's set up to be the most successful edition to date.  I'm extremely proud of what we at Central Command have been able to accomplish so far and believe me when I say that the best is yet to come.  Better yet, let's hear it from the soothing soundbox of head honcho Jeff McComsey, a good friend who has yet to beat me up in public:

If you have a second, head over to the FUBAR: American History Z Kickstarter page and take a look.  If you've got a couple bucks to spare, perhaps you can consider supporting an indy comic that has delivered on a few separate occasions so far. 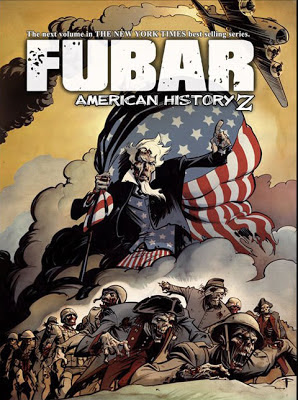 Our newest cover is by Pietro, a familiar name around these parts.  There are some great rewards being offered this time around and more on the way.  Check it out and spread the word! 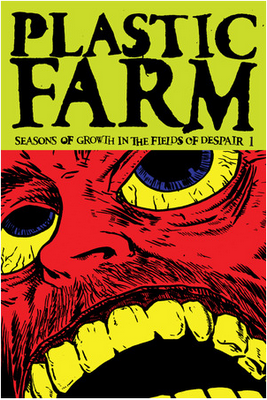 While you're at it, you should also check out the Kickstarter page for Rafer Robert's newest Plastic Farm publication.  Rafer is a fellow FUBARbarian as well as for former editor and contributor to the Magic Bullet.  His name also becomes, with an added t, "Rafter".  And I think that's funny.  Take it away, embedded video!