Just a few months ago, I purchased a page of original Aaron Kuder art from Fantastic Four #5, the wedding issue for the Thing and Alicia. Since I had just picked that up, I wasn't really in the market for another page of FF art from the same run, but then a few popped up for a really good price, and what can I say? It was a great deal and I went for it. 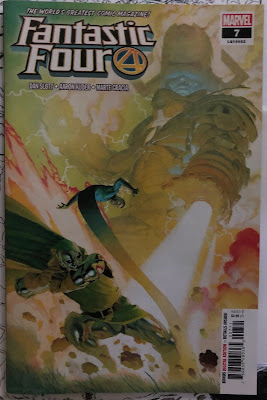 The following pages are from Fantastic Four #7 and are not actually by Kuder - John Lucas helped out with some inks in this issue, and these are his inks over the Kuder's blue lines. That is to say, Kuder's penciled pages are still out there. This actually made it more attractive for me, as I had just bought some of Kuder's work, so now I have something a little different.

I got a total of four pages, each in various stages of development. Let's take a look! 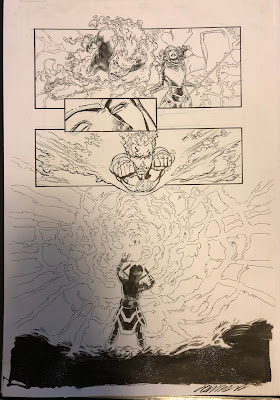 This is the only fully inked page in the lot. You can see Lucas's signature at the bottom of the page. 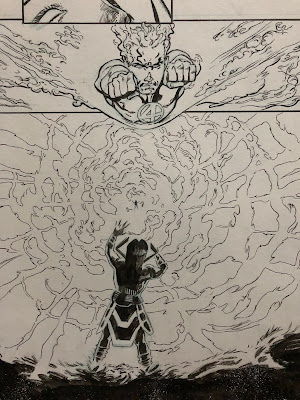 This one has a great shot of the Human Torch going nova in front of Galactus. I finally have some Galactus art! Thank goodness. 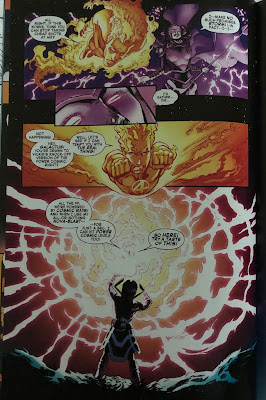 And here's how the page was printed in the comic. 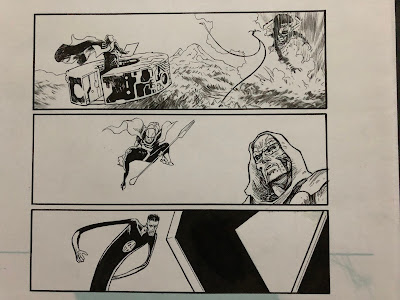 The next page, and the subsequent ones, too, were all partially inked. I don't know if Kuder inked the other parts on his own, or if Lucas did the whole page in different stages, but what's not inked is printed blue line. Here we have the middle three panels of the page, where Reed tries to fool Galactus into thinking that he has the Ultimate Nullifier once again. 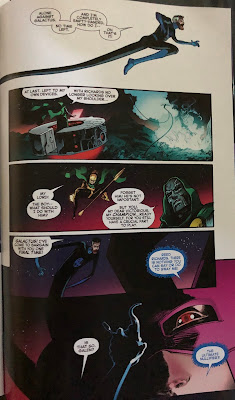 And here's the page in its completed form! 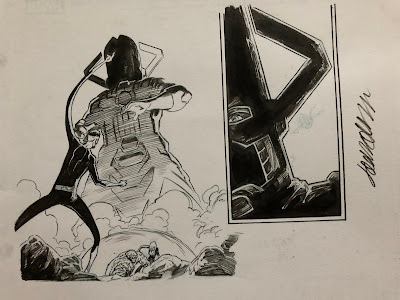 The next page has inks on the top two panels, with some really nice shots of Reed and Galactus, with Sue and Ben at the bottom. 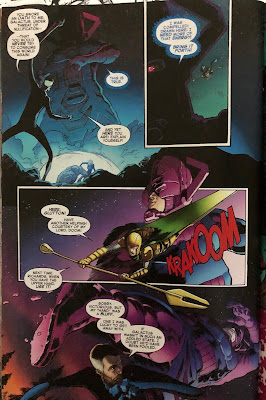 Here's the page as it was printed. 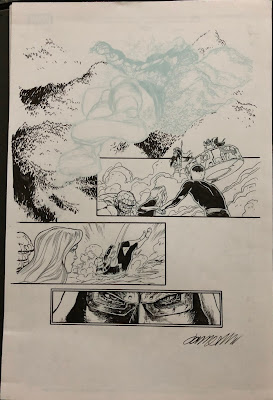 Lastly, here's a page that has an un-inked Galactus crashing into some Latverian mountains. 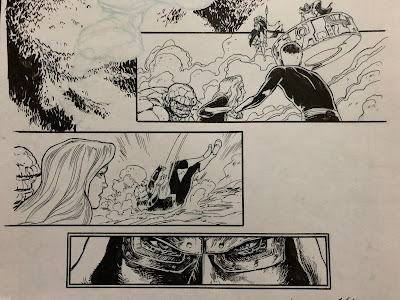 This page also has the best shots of the Thing, and we also see Johnny, Sue and Dr. Doom, too. So this page has the full team and Doom! That's great! 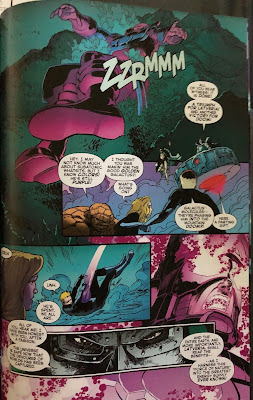 Here's what the final page looked like in the comic. 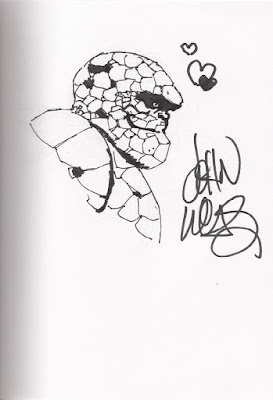 This is actually not the first artwork from John Lucas that I've got in the collection. A full fifteen years ago (!) I got a sketch of Ben Grimm in my much-ballyhooed Thing sketchbook. The above image is from Wizard World Philadelphia way back in 2004. Nice to see John still at it!
Posted by Jeff at 9:42 PM 1 comment: 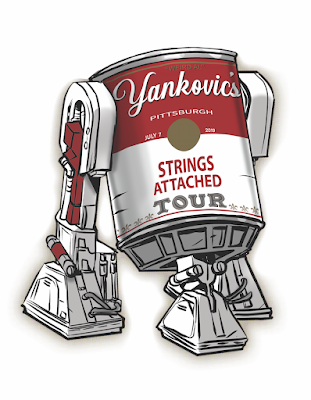 Here's some fun and interesting (funteresting?) news: I worked on a poster for "Weird Al" Yankovic's current "Strings Attached" Tour! It's no secret that I'm a big fan of Al's, so it has been quite exciting for me to work on an official poster for the legendary artist. Since the poster has been formally announced, I thought I'd show a few process pieces and give a little commentary of how we got to the final image. 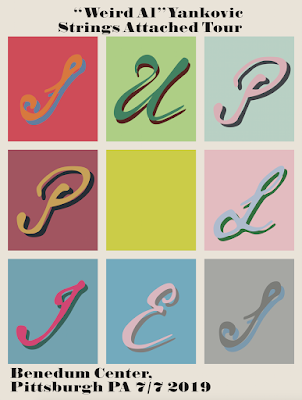 The short version of how I got involved with this project is that one of Al's tour managers contacted me and we talked about a few different ideas. Since Pittsburgh is my hometown, I asked to take on the poster for the July 7th stop at the Benedum Center in the downtown cultural district. Al played there in 2017 and it's a nice venue. Anyway, Pittsburgh is known for being the hometown of icon Andy Warhol, so we wanted to do something in that vein.

The first draft I put together combined a Warhol-esque grid that is reminiscent of a number of his prints, such as the Marylin Monroe grid below: 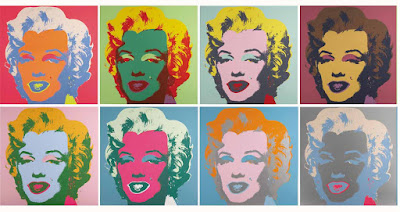 The poster was going to have Kuni, Gedde Watanabe's character in "UHF", leaping outward from the grid background, like so: 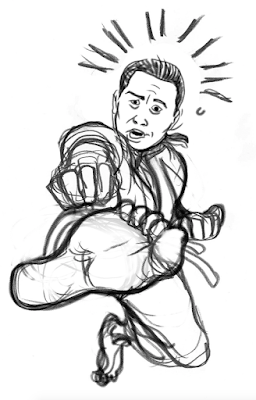 For this part, I called on my friend and frequent collaborator Jeff McComsey, and he came up with this image, which I really like. The text at the top and bottom of the poster were based on this promotional poster: 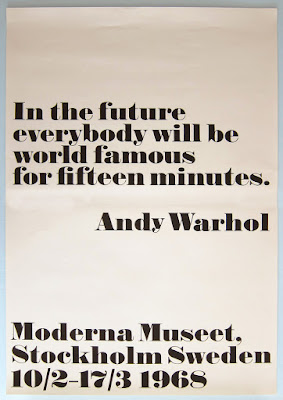 Once I found the font in question, I was able to duplicate it and create all kinds of images, such as... I still like this one. Perhaps it'll still see some use? Anyway, the first draft got scrapped for a simpler, more iconic Warhol image of the Campbell's soup can. Warhol's original was made in 1962, so I found a few different labels from around that time:

And then I went about recreating the image as below. The final version only shows the relatively simplistic front of the label, but there is actually a full back as well.

Jeff then took the label and added it to his rough of R2D2 - that is to say, a version that is legally distinct from R2D2, or perhaps a parody (yes, that's it). Al is known for a number of things, including his two Star Wars-themed songs, so it doesn't take much to complete the reference, or at least I don't think it does. We were asked to remove the dome on top of the Droid's body to highlight the soup can part of it. 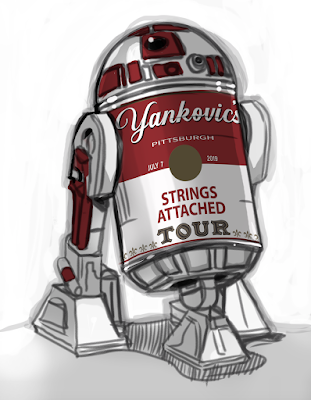 For obvious reasons, one of my favorite Warhol creations is this Superman print: 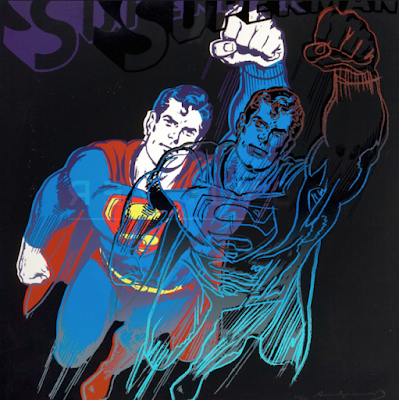 I really wanted to do something similar for the poster and pay homage to that particular image, but it wasn't to be - they wanted the simpler, more evocative image that ended up being the final version. 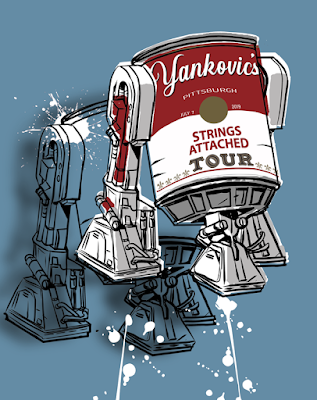 They were probably right to make that change, but I still like the Superman reference. Al posted the image of the final poster on his Instagram page on June 23rd:


And I think people like it so far! The poster is part of the VIP package for the concert, so everyone with those particular tickets will get a print on the night of the show. I'll get a few copies for myself, too!

Al is also selling t-shirts for every single print, including this one. 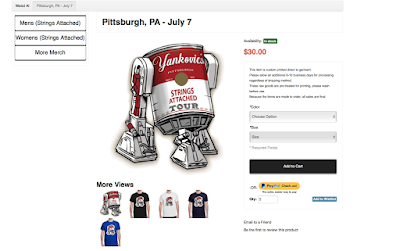 I believe that these are made-to-order, so they should be available until at least the end of the tour! They come in different colors and both men's and women's sizes! You can order some here: https://www.jsrdirect.com/bands/weirdal/pittsburg-pa-july-7

As you might expect, this whole experience has been one of the highlights of my year so far. I've got tickets to the July 7th show, so I'll be there, nervously eavesdropping on VIP conversations to see if I can hear what people have to say about the posters. Maybe I'll grab them from angry and perplexed passers-by and sign them while they chase and beat me in an attempt to get them back! And then I will explain the whole thing and we'll all have a good laugh. It's possible.
Posted by Jeff at 4:00 AM No comments: