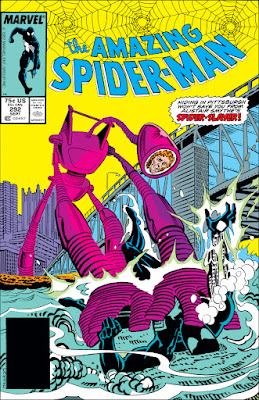 A while ago, I wrote about a two-issue story in which the Avengers visited Pittsburgh, and of Thor's quick stopover in the Steel City. Both were fun, even if they mostly only featured generic references to the city. When I saw that 1987's Amazing Spider-Man #292 had Pittsburgh as its backdrop, I had to grab it and take some pictures. Let's see what awaits our hero! 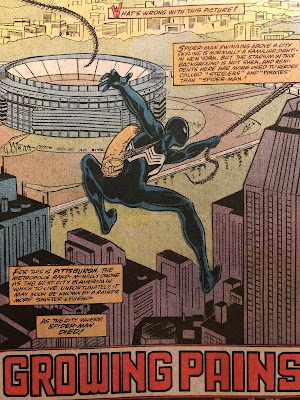 Unlike the Avengers and Thor issues, this Spider-Man story is chock full of mostly accurate Pittsburgh references. and we start out with downtown Pittsburgh, the Allegheny River, and Three Rivers Stadium! The stadium would have had to be about ten times its size to look like this from downtown, but I'll allow it. And we also start off strong with references to both the Pirates and the Steelers, longtime tenants of the all-purpose stadium. 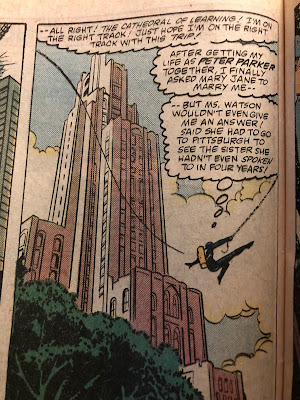 Spider-Man then somehow swings past the University of Pittsburgh's Cathedral of Learning, which is miles away and is not surrounded by any buildings he could really swing from, but, well, okay. Spidey is following after Mary Jane Watson, to whom he has recently proposed, but apparently MJ needs time to think it over by talking with her sister, who lives in Pittsburgh. This is the first time I learned that MJ even had a sister! Who is this mysterious sibling who for some reason lives in Pittsburgh? Why didn't she live with their Aunt Anna in New York City? Questions abound. 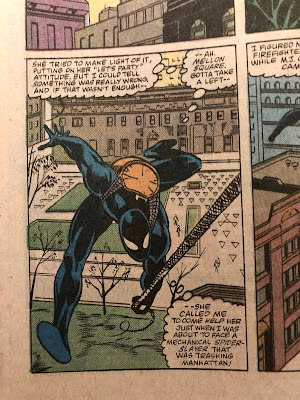 This issue is basically just one Pittsburgh reference after another. I love 'em, of course, but I wonder why writer David Michelinie and artist Alex Saviuk decided to make this issue one big travelogue. Here we see stately Mellon Square... 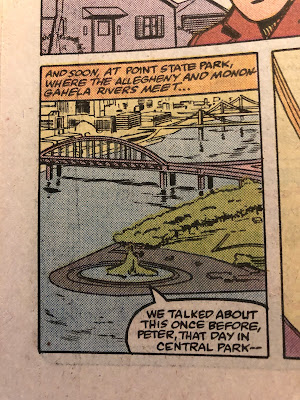 ...and now we're at Point State Park. Wait, this is basically where Spidey was on page one, across the river from Three Rivers Stadium. Why did he swing to Oakland just to turn around and go all the way back to...you know what? Never mind. I'll just enjoy this for what it is. It looks like Saviuk drew the fountain at Point State Park, but the water got colored green like a tree. I'll admit that I do not know if the fountain was running in '87. I guess there could have been a tree there back then. 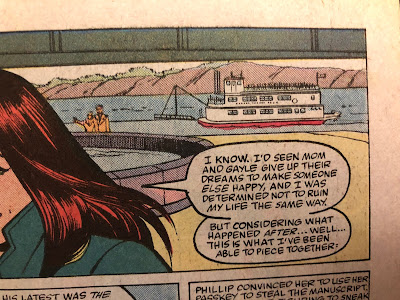 What's this? The Gateway Clipper over MJ's shoulder? Why yes, it is! 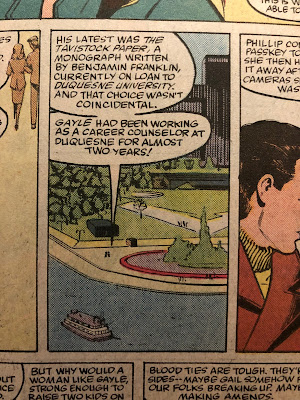 Peter and Mary Jane discuss her sister's plight as they take a stroll through the park, where MJ mentions the nearby Duquesne University. 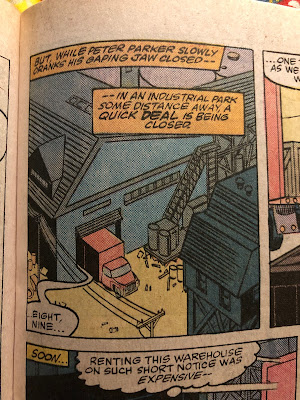 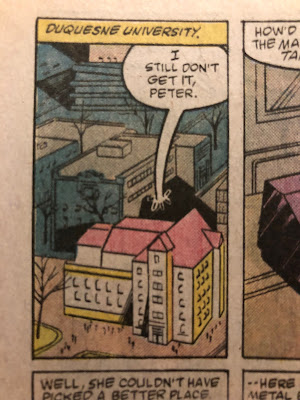 But the main story takes us back to Duquesne University. I think this is supposed to be the Old Main administrative building? 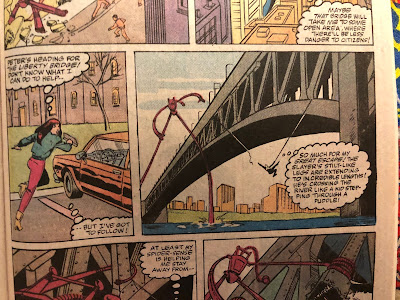 Both the Avengers story and this one pay special attention to the Liberty Bridge, which is right off of campus, as opposed to the Ft. Pitt Bridge, which I think is more visually appealing. It seems that the Spider-Slayer is also in the 'burgh, which is tough news for Peter. I guess using the Liberty Bridge makes sense when you want to bring in that ultimate Pittsburgh visual reference... 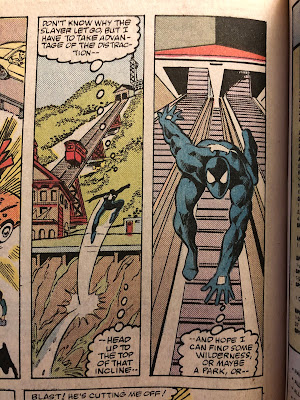 ...the Duquesne Incline! I suppose it is pretty iconic. But I think that those not from Pittsburgh might be overthinking how much it's actually used anymore. 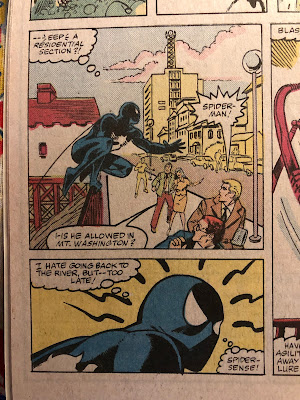 At the top of the Incline is, of course, scenic Mt. Washington, which is also name dropped in this issue. They made sure to name pretty much every location in this book. 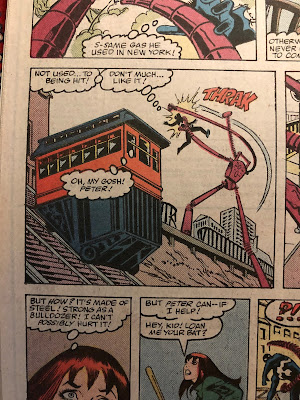 "We didn't get the opportunity to see the Incline car well enough on the last page. Put it in again." 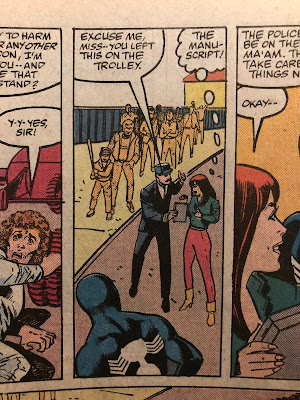 Wait, "the trolley"?! I take back everything good I've said so far. 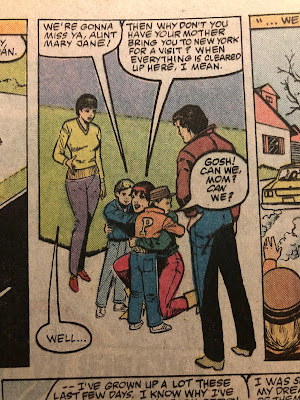 So Mary Jane has a sister, and also two young nephews?! And one of them is, I guess, a die-hard Pirates fan, even wearing the '70s-style pillbox hat? Do we ever see these people again? 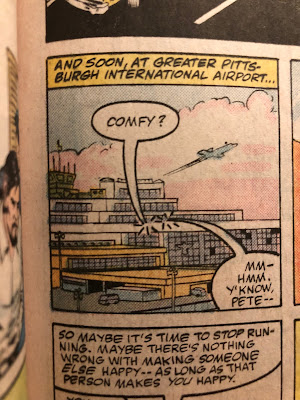 Our last scene for the book takes place at the Pittsburgh International Airport. Mysteries solved and villains defeated, Peter and MJ head back to New York. 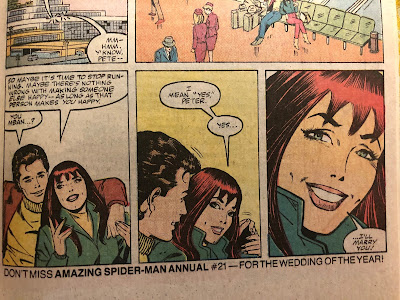 But not before Mary Jane accepts Peter's marriage proposal! Wait, what? What I thought was a throwaway issue is actually one of some spider-historical importance! It's actually the issue that leads directly into Amazing Spider-Man Annual #21 - the wedding issue! 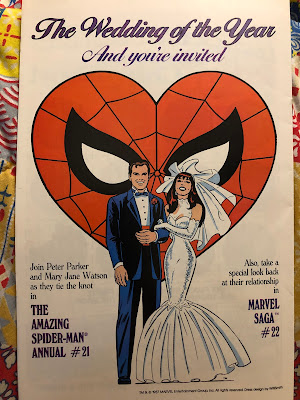 The back cover confirms it! I had no idea.
This whole issue was a pretty wild ride and I'm glad that I picked it up. It managed to squeeze in over a dozen Pittsburgh references in just over 20 pages. I'd love to find and share Pittsburgh in other comics, too, so if anyone has any suggestions, send 'em over!
Posted by Jeff at 1:52 AM 1 comment:

Is it that time again? It is! It's once again time for a new issue of Planet Comics, your favorite oversized sci-fi anthology pulp comic tribute of the 21st century! It is all of those things.

The campaign for Planet Comics #3 is now live on Kickstarter, and I hope that you'll check it out if you haven't yet. There's a little over a week left in the campaign, and the book has reached its initial goal. Let's take a look at some of the art and stories that will be included in this new issue! 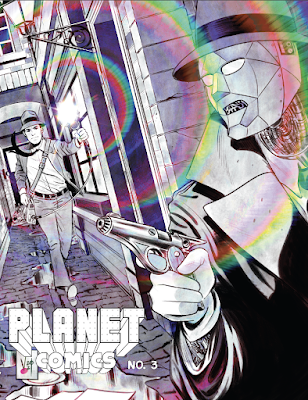 This issue starts off with a main cover by Nickolej Villiger! Nickolej is such a great talent and I'm sure you'll be seeing more of his work in the near future! 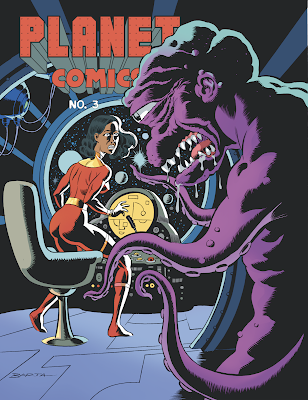 The Kickstarter-exclusive cover for this issue is by Hilary Barta, who has drawn so many weird and funny comics over the past few decades. I love his work on Radioactive Man from Bongo Comics! 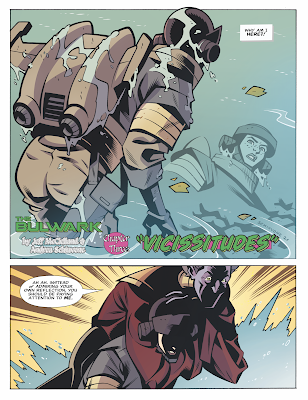 The Bulwark is back with another new chapter int his issue. Andrea Schiavone once again provides the art. He brings so much to this story and the book! I'm lucky to have him drawing the lead story. 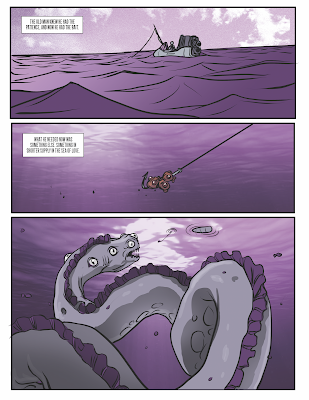 Jeff McComsey's "The Old Man and the Sea of Love" returns again as our other continuing story. More tales of big adventure on the high sea await! 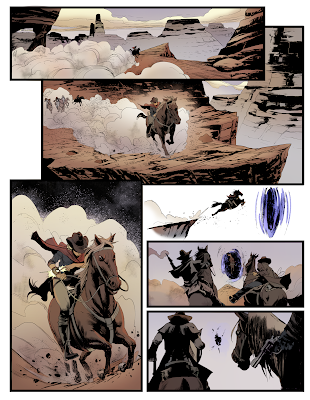 There are a few new stories in this third issue, as well. The first has a weird western flavor provided by Joey Esposito and MoraMike. This story is called "Nixon: Small World." 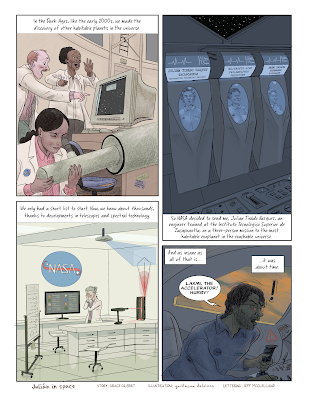 I'm really excited about this short story from Grace Gilbert and Guillaume Deloizon, "Julián in Space." Grace is a former student in one of my comic book classes and she's a really great storyteller! Guillaume's art is so unique, especially in a book like this, and I think it adds such an interesting flair to the publication. 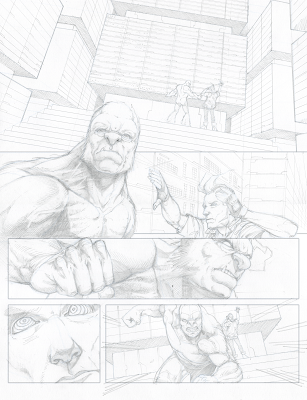 And get ready for this...Duane Redhead and I are creating a new Teddy and the Yeti story for this issue! This will be the first new T&Y story since 2014. I'm so excited to bring these characters back for the first time in a while. 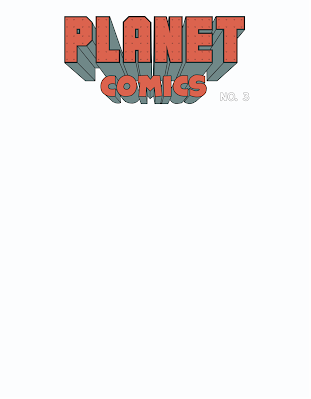 I'm also printing a blank sketch cover edition for the first time in the series. My pal Ian Nichols is offering up his services to draw sketches on these covers as one of the limited rewards! So you can get some bona fide original art with this campaign. I'm really looking forward to seeing some of these covers with pencils and ink on 'em.

This issue will probably end up being a few pages longer than the previous one, which will mean that issue #3 will be the biggest one yet. I'm grateful for the support this book has gathered in the past and I hope for at least a few more issues to come. Please spread the word that Planet Comics #3 is now live! Pledge if you can! Write me weird comments below this post!
Posted by Jeff at 1:32 AM 1 comment: