There has to be an explanation for this. 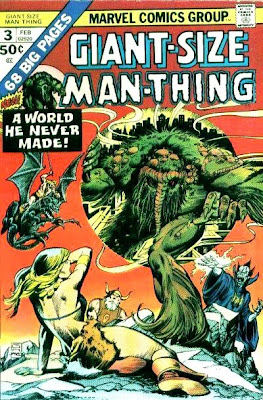 It's often unfair to judge things that have happened in the past with today's understanding. This is a general axiom that can be applied to comic books in a lot of cases - the infamous "Slap a Jap" World War II-era cover of Action Comics (urging people to buy war bonds) is a great example of this. SURE it's racist, but when you look at it in the context of one of the most costly wars of all time...well, okay, it's still racist, but you know what I mean - it's an unfortunate byproduct of an us-versus-them mentality that was of course present during the war.

There are times, though, when this concept doesn't hold up, and as an example of that, I give you exhibit A: Giant-Size Man-Thing. In the 1970s, Marvel published a lot of these types of books - they were called "Giant-Size" because of the page length. There was Giant-Size Fantastic Four, Giant-Size Spider-Man, Giant-Size Avengers, and so on, so there was precedent. But even so, I find it difficult to believe that those in the Marvel bullpen at the time weren't in on the joke, somehow. I mean, come on - it's not like there weren't such things as euphemisms 35 years ago, and this one is one of the more obvious ones.

Perhaps some of the villains in Giant-Size Man-Thing could have been the terrifying Bearded Clam or the dastardly One-Eyed Monster if they wanted to take it a step further. That people bought enough of these books for Marvel to publish more than one issue is a wonder on its own. I have to chuckle, looking at the cover posted above - the woman at the bottom is simply terrified of a giant-size man-thing. I probably would be, too.

Other stuff, part 1 - The Protector 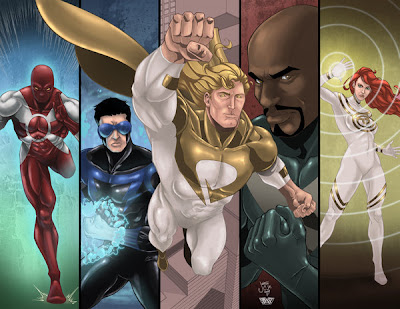 There are lots of things keeping me busy right now - getting Teddy and the Yeti off to the printer (things are finally squared away in that regard), preparing for my five classes this semester, aimlessly looking at pictures of cats on the Internet(s) - so I will take some time and show off a few of the other comic book-related concepts I'm working on right now. And by "take some time" I mean "slap up a picture and get back to work on looking at pictures of cats".
Well, okay - I can't say I look at lots of pictures of cats, but I've been known to wander online without realizing it.
In any case, this first image is from a project I'm working on with Mike Adams and Jorge Correa titled "The Protector". We're basing the series around the question, "what happens when the world's only superhero is killed?" Take a peek.
I sure did use a lot of quotation marks today.
Posted by Jeff at 11:57 AM 1 comment: 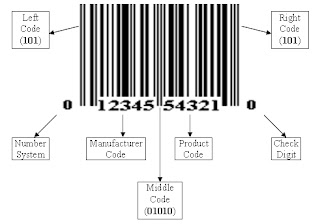 As comics have more or less lost their space on spinner racks in grocery stores and gas stations, the need for UPC codes have lessened; comics have since found more homes in smaller specialty shops with no capabilities or desires for electronic scanning devices.

If you pick up a back issue from one of the large companies published in the 1980s, it's easy to see which of them were originally sold in comic shops (i.e. the "direct market") and which were sold at, say, a Walden Books at the mall - direct market editions would still have the box on the cover where the barcode would have been printed, but instead of the zebra-stripe lines, companies would put logos or artwork in their place.

Until I figured this out, I would wonder why Marvel decided to put a picture of Spider-Man's head in the bottom left corner of all my Fantastic Four issues. Did they think I just wanted to see it? Was it a marketing tactic to get me to pick up issues of Web of Spider-Man? No (well, maybe on some level), it was because stores selling this version didn't need to scan a barcode to keep an inventory of what they were selling like they would at, say, a hardware store. They sold one thing and almost exclusively one thing - comics. If comics cost a dollar and you bought 16 of them...well, I'll bet adding all the books up wasn't the most difficult thing, either. 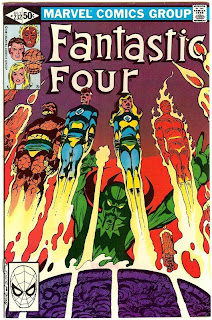 This, apparently, is changing, as I found out when I listed the first issue of Teddy and the Yeti in Diamond's Previews publication. It seems that anyone listing a book in Previews is now required to have a unique, scannable barcode on the cover.

I'm honestly not sure that I've yet been to a comic shop equipped with a scanner. The one here in Wilmington is a fairly up-to-date shop; it's a decent size with lots of different products - comics, shirts, posters, action figures, games - to choose from. They write down what you're buying on a piece of notebook paper and add the total up with a calculator. This is how they do it! And it's never once struck me as odd.

But I suppose that it was bound to happen, and, I thought, now I could have my own shiny barcode that I could flaunt around school to all of my friends. It seems that most barcodes are bought in bulk, and it was suggested that someone like me, who needed to buy...well, one...go to a website where they resell barcodes. I'm curious as to why there are barcodes available to sell again. The one you had wasn't working out for you? Found a newer one and decided to replace the older model?

At any rate, I ended up buying three from www.buyabarcode.com. One UPC code cost $85 and the total for three was $150...so now I have two codes just lying around, taking up space in my house. Maybe I'll take one and slap it on my pants...just so I can walk around scanning my pants when I go out shopping. Maybe there will be guards who will try and stop me as I walk out of Target or some place, and I will have to explain that this has all been a big misunderstanding, because you see, these pants are mine, and the barcode is mine. And then we will laugh.

So Teddy and the Yeti #1 is appropriately tagged and coded. I had to move a few things around on the cover to make sure nothing was obstructed, but it worked out just fine. Now the three comic shops with scanners can all breathe sighs of relief. 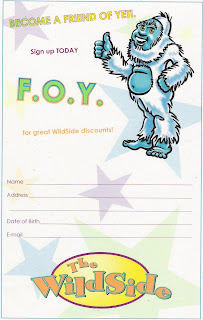 Let me first point out that this is the most ingenious blog title I've ever come up with. So enjoy it!
Nemacolin Woodlands is a resort area located south of Pittsburgh near my old hometown. Fayette County is a rather economically depressed area, so it's an odd juxtaposition to have a five-star hotel and resort nearby catering to political dignitaries, sports figures and celebrities, though it does make for some interesting news headlines from time to time (such as when the founder and owner gets married...AGAIN).
As Nemacolin Woodlands and 84-Lumber founder Joe Hardy continue to be the only game in town, so to speak, the number of facilities at the secluded retreat grow in conjunction. "The Wildside" is one of their newest attractions, and it seems as impressive in its offerings as the other themed areas, featuring bowling alleys, pool tables, an indoor climbing wall and a few dozen arcade games.
The mascot of the Wildside, as it turns out, is a Yeti. Why? It does seem a bit tangential...I mean, I guess the Yeti supposedly lives in the wild...but so do pretty much all animals. I guess the Yeti, being a mythical creature and all, has that attraction to it. If you sign up for their newsletter, you become a Friend of Yeti (is that its name??), which, again, seems like they pulled it out of nowhere with no regard for acronyms that also spell things or at least could conceivably be a word. ("I can't wait to be a FOY!" doesn't exactly roll off the tongue.)
A friend of mine handed me the notepad you see pictured at top. He was distressed because he thought that Nemacolin Woodlands ripped me off in the depiction of their Yeti. In truth, the comic book Yeti is designed after the fairly consistent general legendary depiction, as is this mascot Yeti, so there's obviously no foul there. But it is interesting that the resort 20 miles from home decided to use a "thumbs up!" Yeti as their logo.
As Mr. Hardy and Nemacolin Woodlands have billions of dollars in funding, I'm open to a sponsorship deal. MAKE IT HAPPEN!
Posted by Jeff at 4:15 PM 1 comment:

As promised, a more detailed update on Teddy and the Yeti and its current status: first, the bad news. Teddy and the Yeti #1 won't be in stores until December of this year. Now, the good news. TEDDY AND THE YETI #1 WILL BE IN STORES THIS DECEMBER!!!

After lots of work and preparation, I submitted a complete copy of the first issue of the book to Diamond Comic Distributors, otherwise known as the distribution company who might as well be the only game in town. It's been accepted, which while I expected as much is still a huge relief, and is set to appear in the September issue of Previews magazine. Once that comes out, everyone can rush to their local comic book store and demand (DEMAND!) that a copy is held for them.

In the meantime, I'm trying to focus on printing the book. I am planning on printing through Brenner, and things seem to be going well on that front, though it's not finalized just yet. I hope to have that under control within a week, because the first time in forever, I actually have more than self-imposed deadlines to work against.

So things are moving along. There's lots to do, but that's an exciting feeling.

WHAT'S GOING ON AROUND HERE?! 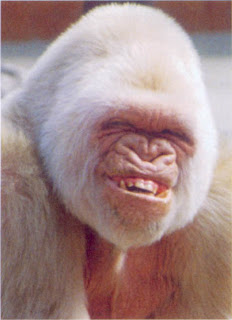 Well, crap. I've let this blog (and its many page views) slip over the past few months, but that's all about to change. Promise. Teddy and the Yeti has made some strides and is now primed to ship to comic stores around the world this December. It's a little later than I had hoped, but now that it's set, it's something to look forward to. I'll post on here more often, with updates on the main site as well. Things are looking up and there are lots of updates to share! Stay tuned!
Posted by Jeff at 1:43 AM 2 comments: