Sea Monkeys look nothing like comic books would let on. 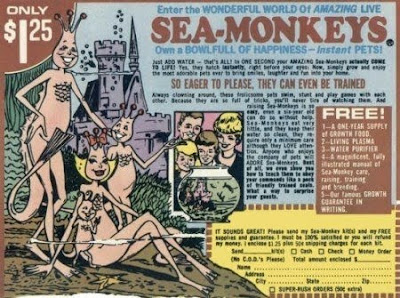 It's a shame that Sea Monkeys aren't advertised in the back of comic books anymore - this really is a former comic book advertising staple that disappeared from modern comics, what, 25 years ago?  Regardless, anyone who digs through the back issue bin at a local shop is sure to find an ad for these seemingly magical creatures that appear from dust to form 1950s-style nuclear families with water and a bit of luck.  Despite my staunch opposition to the mistreatment of animals and the understanding that Sea Monkeys are both living things and probably easy to kill, there's still something exciting and fanciful about sending two bucks in the mail and creating an entire underwater society on a whim. 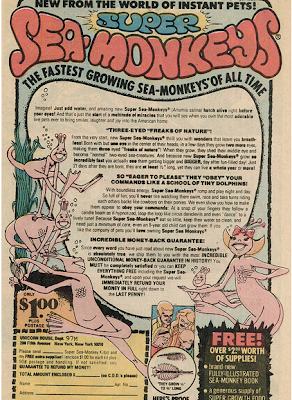 In stark contrast to the artistic renderings on ads such as the two above (Sea Monkeys are just like people! They live in happy family units, wear bows in their hair and fly kites!!), the first time I made my own Sea Monkey pod, I was shocked at the actual appearance of these mystical sea swimmers.  It turns out that Sea Monkeys are a hybrid version of brine shrimp (you know...what blue whales eat!  Oh wait, that's plankton) and they look something like this:

Creepy, right?  I mean, this guy's doing some kind of hideous backstroke, not barbecuing, building a castle or tossing around a football with junior, as was implied in all of the comic book ads.  Why, I'd go as far as to say that real Sea Monkeys don't act nearly American enough for the average comic book reader.  Where's your patriotic spirit, creature so small that the standard tank comes with magnifying lenses built in?  Why aren't you wearing a funny crown, trying on pants or buying nail polish for your wife?  Why aren't you out doing manly things in the open air (water?), positioning yourself so that a well-placed fin covers your exposed human-like genitals?  WHY DON'T YOU ACT MORE LIKE ME?! 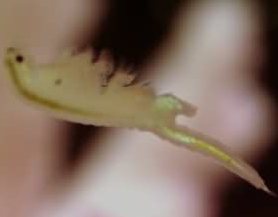 I recently bought another batch of Sea Monkeys (16 or 17 years after my mom "accidentally" knocked our first family into the sink), and I'm happy to report that everyone is doing well (I think.  They're swimming a lot, which I take to mean they're doing well).  I even bought a number of things from the official Sea Monkey catalogue to make sure I'm prepared, like vitamin-rich "Red Magic" food, banana-flavored (flavored?) treats and a tiny manual air pump.  I'm gonna make sure that, overinflated comic book expectations or not, I'll take care of these guys as best I can.

Wait, banana treats?  I love banana treats.  Hey, Sea Monkeys: maybe we're not so different after all, you and I. 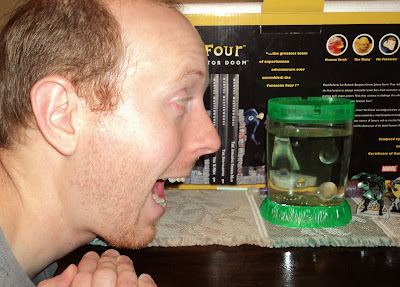 (For now the "tank" sits in front of my Fantastic Four bookends box...and some Shrinky Dinks).
Posted by Jeff at 4:00 AM