Planet Comics #2 is now on Kickstarter!

Last year, the first issue of Planet Comics met its goal on Kickstarter, and last month, I was able to print the issue and start sending it out. Here it is! It exists! 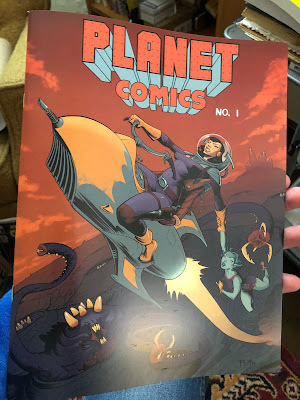 I've decided to press my luck and make a second issue, and now the campaign for this book is on Kickstarter! This one runs until the last week of March. Let's take a look at what we'll find for the second issue of the new Planet Comics! 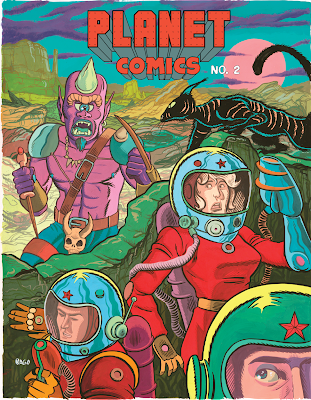 Like the first issue, issue #2 comes with two cover, a regular cover by Adrián "Bago" Gonzalez... 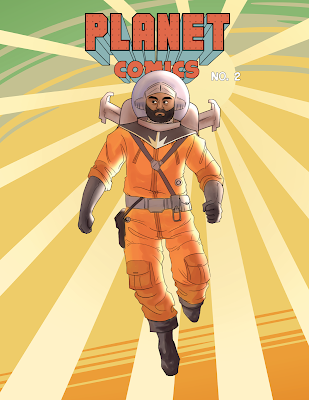 ...and a Kickstarter exclusive by Andrés Muños Setz! This one is a companion piece to the exclusive first issue cover by Matthew Dow Smith. 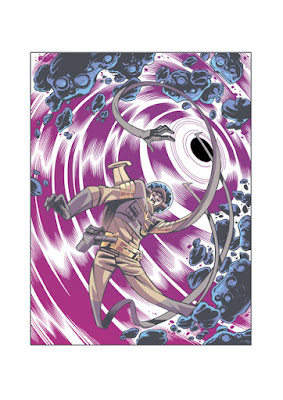 The Bulwark returns for a second chapter as the lead story of this issue. 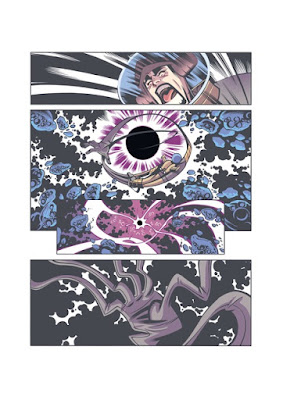 Andrea Schiavone once again provides the art for this story! I'm excited to have a story that continues from one issue to the next! Most of my stories have been single-issue tales so far, so it's nice to write one that stretches out over a few issues. 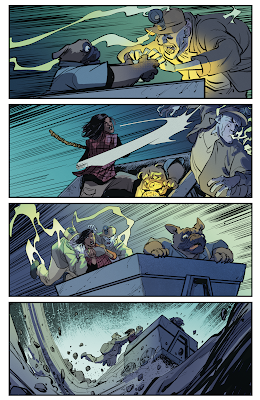 I'm really excited to have the opportunity to publish an original Grumble story from Rafer Roberts and Mike Norton. Grumble just ended its run with Eric Powell's Albatross Funny Books and to have it continue here is a big deal. 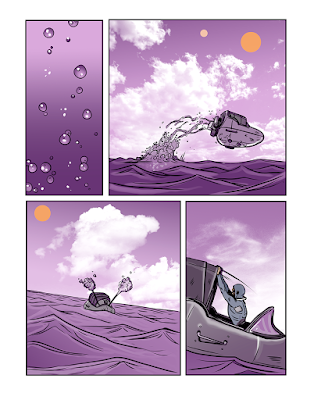 Jeff McComsey's "The Old Man and The Sea of Love" continues in this issue as well! 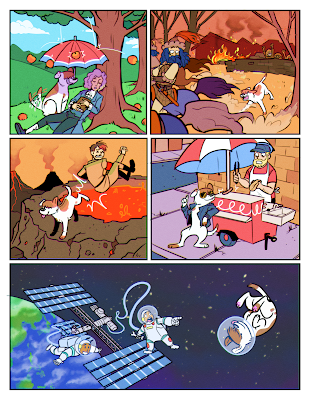 Another new feature in this issue is "Badges O'Keefe, Canine Time Thief" with Dani Grew and your friend (and mine) Larry Franks! I love working with Dani on pretty much anything (Larry is okay), so I'm really excited about this story. There's also a reward where you can have your dog drawn into the book!

See?!
There are a bunch of rewards this time around, from other comics to shirts and pins to social media profile art.
I launched the project two days ago, and we're currently a little over 50% toward the goal. This gives me hope! If we reach the goal, I'll have stretch goals that I'll announce soon, but will most importantly include more content for the book.
I hope you can check out, support and/or share this project and help me make another issue of Planet Comics! Here's the link! Look at it! LOOK AT IT!! https://www.kickstarter.com/projects/jeffmcclelland/planet-comics-issue-2?ref=creator_nav
Posted by Jeff at 2:20 AM 1 comment:

I watched a little bit of the Super Bowl last night - the Steelers didn't win it, so who cares - and I caught one of the many weird commercials during the game, this one for "Inspiration4", promoting an all-civilian space flight for four individuals.
The actual commercial is fairly simple: there are plenty of dramatic pans around a futuristic-looking spacesuit, a reflection of the planet Earth seen in the helmet, and a backdrop of a moody rendition of "Twinkle, Twinkle, Little Star." But the circumstances surrounding the opportunity - four civilians, an experimental spacecraft, the number 4 in a circular logo - draws some obvious comparisons to...oh, what is that book called?

Oh, right. THAT ONE.
Space flights aren't for just anyone. They're for a brilliant scientist - his best friend - the woman he loves - and her fiery-tempered kid brother!
This HAS to be a promotion for the 2022-scheduled Fantastic Four movie, right? I know what everyone says - that it's a SpaceX flight and one seat is going to be raffled off to someone who donates to St. Jude's charity, but how could this be ANYTHING other than either a movie teaser or an opportunity to become a real-life FF by exposing yourself to seemingly deadly amounts of cosmic radiation? What about the SHIELDING, Reed?!
I guess we'll see how this Willy Wonka-style contest plays out. But a word of warning to whomever actually gets to travel in this spacecraft: 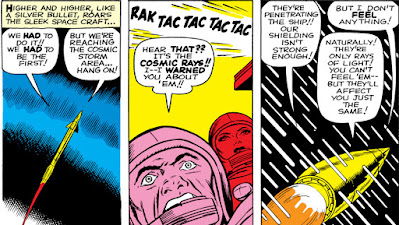 It's been a while since I picked up a new color guide, and this one is pretty special - here's a page of color work from 1976's Marvel Two-in-One #19 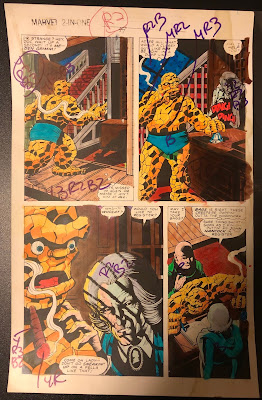 Color guides are photocopies of line work that a colorist would use to quickly decide on how the final product would look. These are very much production pieces and were used as a consultation piece for the printed page. 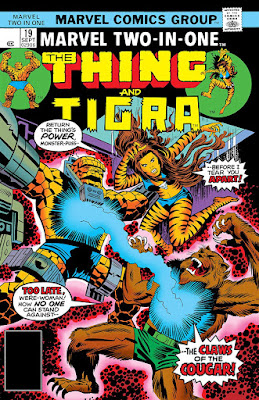 Marvel Two-in-One #19 was the title's attempt at a scary Halloween-type story, with the Thing traveling to a spooky hotel and running into a few things-that-go-bump-in-the-night. It also has this incredible Jack Kirby cover! 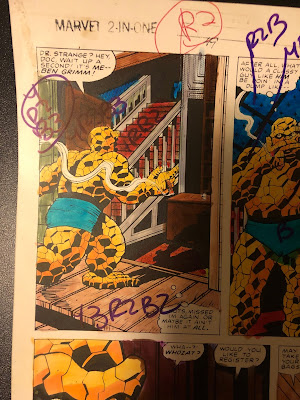 This is one of the middle pages in the issue, and Ben's cigar plays almost as big a role as he does as he attempts to check in. 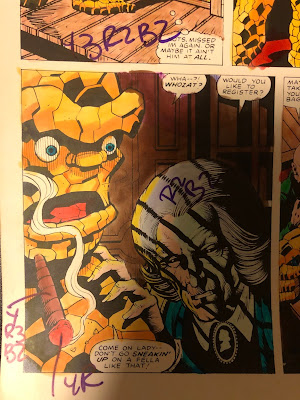 Colors for this issue were from Petra Goldberg, over Sal Buscema pencils and Don Heck inks. 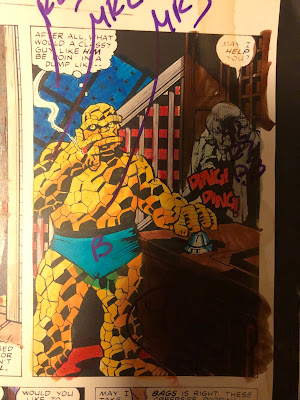 Lots of great Thing shots on this page. He's in every panel! 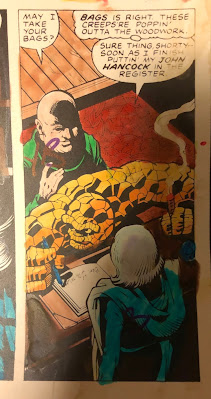 The story itself is a bit predictable - the main villain actually dies at the end of the story - but I've always liked Tigra because my first introduction to the Fantastic Four were issues where she and Thundra were hanging around the team for a bit. This is the first issue of Two-in-One I ever read, too, so it's a real treat to get a color guide from this very issue. 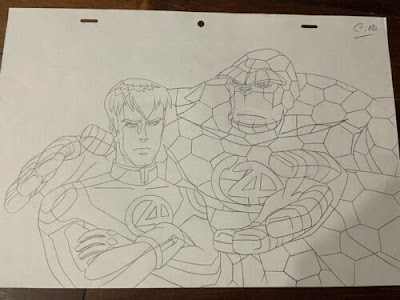 I also got some new FF animation artwork! 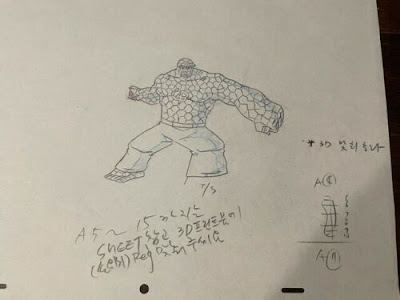 These new pieces all come from the 2006 Fantastic Four: World's Greatest Heroes cartoon. Someone listed a bunch at once on eBay and I managed to grab a handful. 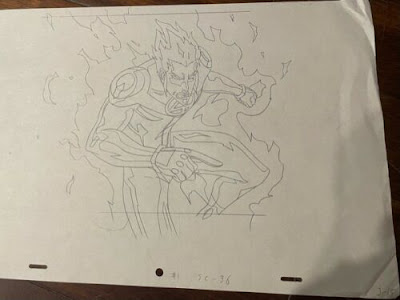 For whatever reason, Sue and Doom seem to be the toughest team members to get when it comes to animation art, and it worked out that way this time, too. I got some featuring Ben, Reed and Johnny. I hate how Johnny's hair is drawn in this show, though it looks okay in this one. There's Reed, doing what he does...which is stretching. 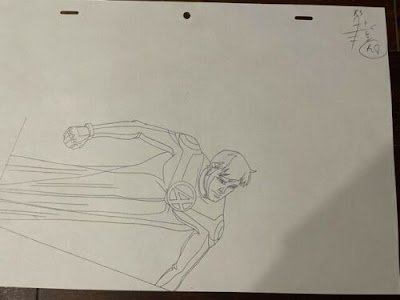