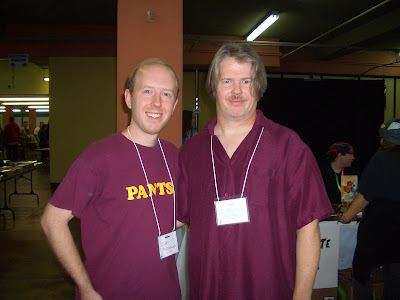 I met C. Martin Croker in 2010 at, of all places, a small comic convention in Myrtle Beach. He was one of the guests at an early iteration of X-Con World and, as at the time I lived about 15 minutes away from the convention hall, I bought a table at the show. The convention itself was okay - I didn't sell very much, but my costs were low and it was nice for what it was - but the highlight of the weekend was getting to meet and trade stories with Clay.

Of course, I knew Clay from his work on Space Ghost: Coast to Coast, which remains one of the great tv spoofs and is a precursor in tone to many of today's late night talk shows. At the time I knew that Clay had voiced both Zorak and Moltar, which is in itself an impressive feat, but soon learned that he was also art director and one of the main animators on the series. Over the weekend, I learned that we shared a love of the Thing, comics and other pop culture items. I even worked up the courage to ask him to draw in my Thing sketchbook! 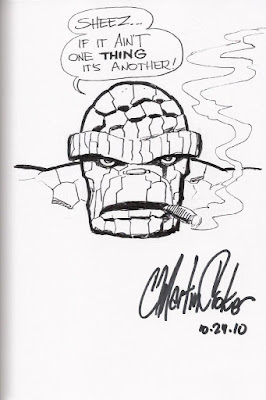 Between then and now, he and I kept in touch and met up on occasion, trading stories and mailing each other items. Whenever I'd travel to Comic-Con in San Diego, Clay would talk about one item or another that he had his eye on, and I would usually end up grabbing it for him. A few years ago, he sent me a message on the very last day of the show - with only a few hours before it closed - and asked me if I could locate an exclusive shirt that the Jack Kirby Museum had for sale. I was able to track it down at nearly the last minute, but at that time they only had size XXXL available. As you can see in the picture at the very top, Clay was an XL at best, but as I was kind of on the spot, I went ahead and purchased it anyway.

A few months later, I saw Clay in New York, and he was wearing the shirt. He was swimming in the thing. I'm not even sure if he remembered that I was the one who got it for him, but it was just so funny seeing him wearing the shirt that was obviously much too big for him. But I guess he liked it, because I saw a number of pictures of him wearing it over the next few years. Maybe it was really comfortable? 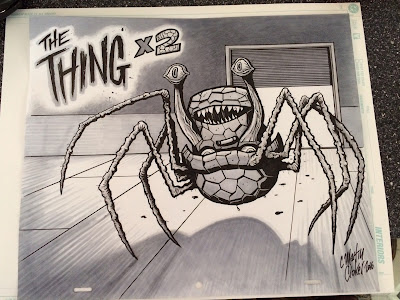 Last month, I was getting ready to leave for a concert when I got a package from Clay at the post office. I was racing against the clock but I couldn't leave without opening it. This thing was taped so well that it took me probably ten minutes to get it opened properly. But when I did, I saw the above mash-up between Marvel's The Thing and John Carpenter's The Thing in all its glory. Clay had been talking about this (without giving away the subject) for at least four years, saying that he had something to send to me as a thank you for some of the items I had been able to find for him. At this point, I assumed that it was just never going to happen, and that was okay. The joke was almost as good as the product itself (I was telling myself that, anyway). So suffice it to say that I was a little taken back to see this show up at my door in 2016.

Larry drove to the concert that night, and on the way there I sent Clay a message thanking him for the artwork. He responded pretty quickly, and we were able to catch up and talk for a few minutes.

The next evening, Clay passed away pretty suddenly. It was a shock to everyone he knew. The timing really threw me for a loop as I had a conversation with him just 24 hours earlier. Everything seemed normal, but he was gone soon after. I'm so glad that not only did I decide to open the package before I left the evening before, but that I took a few minutes to get in touch with him. 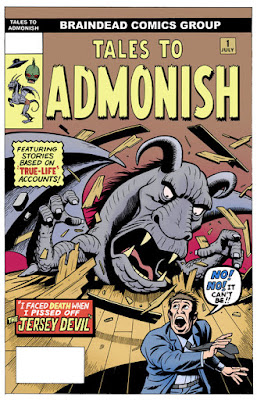 One of the things that Clay brought up with me nearly every time we spoke was his proposed comic book series, "Tales to Admonish". It was supposed to be a sendup of 1950s Kirby monster comics, with farcical and facetious stories about monsters like the Jersey Devil and El Chupacabra. This was always something that Clay had in the back of his mind, but his animation and voice work always got in the way of seeing it through. When he first told me about it, I went home and immediately started planning my story submission with artist Paul Tucker (in may ways it was my way of saying "please notice me!"). After I sat on it for a few years and realized that the book wasn't really going anywhere, I published it as part of the 2015 "Imaginary Drugs" title from IDW: 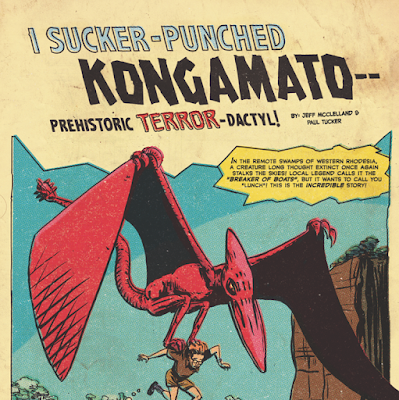 Just last year, Clay sent me a message saying that he was still working on the title, though I haven't seen much more than a few covers. This is kind of how he was - always full of ideas, always thinking, always creating, and always running out of time to see all of them through. His body of work is incredibly impressive - from TV to comics - but there's always things left undone, and it's a shame that Clay didn't get to finish all of his projects.

During our second-to-last conversation, Clay mentioned to me that he hadn't yet gotten one of the new Funko Pop! Zorak figures that had been released in July as a Comic-Con exclusive. Neither Cartoon Network nor Funko had sent him any, which is, of course, awful. So, naturally, I made up some story about how I "might" be able to grab one at the upcoming New York Comic Con, and immediately went to eBay to purchase two - one for me and one for him. Clay passed away on a Saturday, and the figures were delivered to me a few days later on Tuesday. Opening the box was rather haunting, and now I've got an extra Zorak figure that sits on my shelf as a reminder that my friend has gone.

Clay was such a fun guy to be around, with his exaggerated expressions and self deprecating humor. He's someone I admired and wish I could have known him better. I'm thankful for getting the chance to speak with him so soon before he passed. I think about him often.
Posted by Jeff at 3:23 AM No comments: