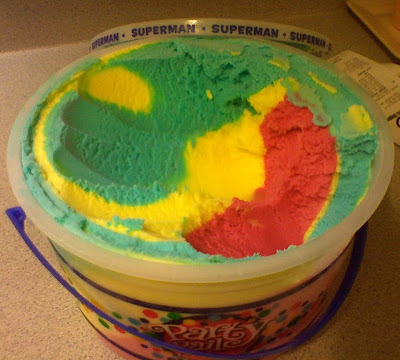 The answer to the above question is, of course, "the people".  The people own Superman ice cream, and we shouldn't delude ourselves into thinking otherwise.  But let's consider, just for a moment, that a concept as grand as Superman could actually be owned (and trademarked and copyrighted) by a person or corporation.  Would said corporation be willing to let other companies make an ice cream based off of its intellectual property?

The answer is apparently "yes", because Superman ice cream does, in fact, exist.  It may be glorified vanilla, but it carries the name and color scheme of the DC Comics icon.  There are a number of ice cream manufacturers (can you manufacture ice cream?) with their own version of Superman ice cream, and as far as I can tell, no company has made any kind of licensing agreement with either DC or Warner Bros., its parent company.  In a world where companies hold on to their money making properties as if they were made out of...well, money, how is this possible?

If Superman ice cream were made by one single, local company, I could chalk this disparity up to the company slipping under the proverbial radar - the same could be said if "Superman" were just a flavor at an ice cream parlor.  But that's not the case.  While maybe it's not absolutely ubiquitous, it's not all that hard to find this kind of ice cream, regardless of where you live in North America (who knows if Luxembourg has it in stock).  The color scheme is red, blue and yellow, so it's not like any claim can be made that this is the Friedrich Nietzsche superman.

Don't get me wrong - I like Superman ice cream and I'm glad that I can run down to the local Kroger and pick up their "party pail" (it already feels like a party with it in my freezer!).  I just don't know how DC allows this to happen.
Posted by Jeff at 2:33 PM

Cool! I have never seen this type of flavor at my local Kroger store before...