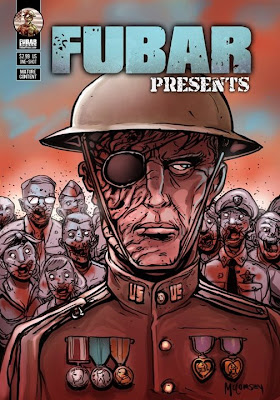 Here's some thrilling and terrifying news: it's closing in on one month until the 2012 San Diego Comic-Con is upon us!  I've still got lots to do to prepare, but I'm making headway every day...it always seems like there's another dealing looming.  It's going to be a big show, of course, and I'm trying to be as prepared as I can be, even though experience tells me that there's no way to be 100% ready.

One of the things that Comic-Con is known for is exclusive products, and I felt like it would be cool to get in on that train.  Now that the dust has settled, I'm happy to announce that, with the help of some friends, I've put together an exclusive FUBAR book featuring an all new story titled "Old Ghosts".  I've shown a clip before; here's another: 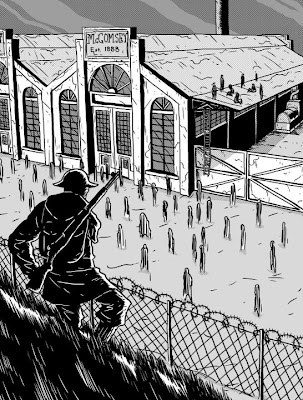 The story is 11 pages long, is written by me and features art by Daniel Thollin.  The cover you see at the top of the page is by head honcho Jeff McComsey.  It's the first time we've used the FUBAR Presents logo and it may not be the last!  But if you wanna get a copy, it'll have to be in San Diego at Comic-Con.  We're printing out 200 copies of the 24-page book and selling it for $2.99 (well, $3.00, I guess).  It'll be interesting to see how the books do.  From an overall perspective, I hope that they get a few more people to check out the big anthology books.  The third anthology is coming along nicely and is on schedule for a late 2012 release.  I just saw the finished cover today!

I (almost desperately) wanted to use the official Comic-Con logo on the issue, and for a while, it seemed like it was going to happen.  Comic-Con lets others use its logo for no charge, and many items you see from the show have a sticker displaying the exclusivity and the famous Comic-Con eye that you see above.

When I submitted the book for review, though, I was told that FUBAR could not use the logo because the book was not all-ages appropriate.  Naturally, I already knew that, as it's got the same content on the surface as many other zombie-themed books: violence and gore.  What I didn't understand at the time is why FUBAR is excluded from using the logo when other "mature" items get the green light.

I brought this up with someone at the convention, and was told that no mature items are allowed to use the logo.  I knew that I had seen books that were just as, if not more, violent than FUBAR with the logo attached, so I did a quick Google search.  In no time I found the following two images among others of a similar nature: 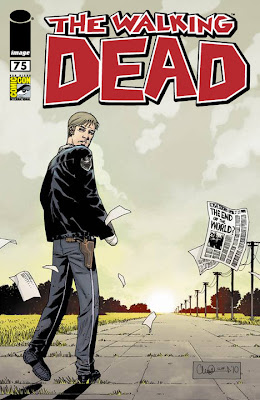 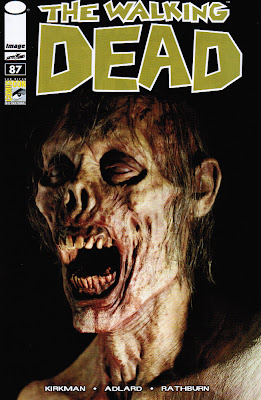 Hey!  That's what we call a double standard, folks.  And I get it - life's not fair, and if you've got a big Hollywood presence, some of the rules are bent for you.  It's a shame and I wish we could use the logo (because it looks...so...cool!), but I guess it is what it is.  I don't want this post to come off like I've got a grudge or anything, because in the big scheme of things it's not a big deal.  But I was a little upset.  Even so, I look forward to hawking this limited edition of FUBAR Presents at Comic-Con!  Maybe I'll sell 199 and hold one back...for eBay.  That'd be something.
Posted by Jeff at 5:51 PM