Howdy, folks. It's been a while, but I hope you haven't missed me too much. 2015 is crawling to a close and, all things, considered, it's been a good one for me and comics. I've been very lucky to work on some really fun books and I feel like I've made a little more headway this year than in years past. I apologize for not updating this blog as much as I probably should, but I guess that when my choices are to write a blog about how much I hate the Fantastic Four movie and work on a comic script, I'm best served by doing the latter (usually). Now the real key is to figure out a way to quit my day job so that I can write both a lot more often. Who knows? Maybe one day it'll happen.

Here's some exciting news to close out the year: I'm working on a new book with FUBAR's Jeff McComsey and Paul Little and Pietro titled "Honcho". The book is currently campaigning on Kickstarter, and I hope that you'll take a few minutes to check it out and, if you'd like, pre-order the first volume! 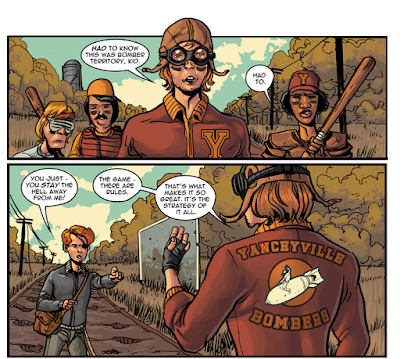 Honcho is a story that takes place in the far-flung future of the 1980s, 15 years after World War III ruined much of the civilized world. Our protagonist, Captain Stanley, arrives on the shores of North Carolina claiming to represent the United States government in exile. He finds a country split into factions, many of which have taken to baseball to divide territory and settle disputes. Can Stanley unite the separate factions on his way to Charlotte? Is Stanley even in his right mind to begin with?

Honcho takes a lot of its influence from Miguel De Cervantes's Don Quixote, a book I've come to love in the past year, so I'm excited to try and channel some of that madness into this new graphic novel. The first eight pages of the story are available to read on Jeff McComsey's blog, here: https://mccomseycomix.wordpress.com/2015/11/29/honchovolume-one-preview/

The campaign has a few days left to go, and I'm happy to say that we've met our initial goal. There are plenty of stretch goals to be had, though (including some retro baseball cards, which I'm nuts about), and up next on the list are some Honcho mini comics, which I really hope we are able to do.

If you have a second, do me a favor and check out the campaign. It is set to end just after midnight on Monday, January 4th! Keep your fingers crossed for us. Here's to a productive 2016.