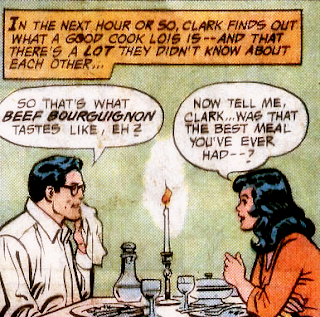 Superman is a meat eater.  I know that may ruffle some feathers, but it's been a part of his mythos for quite some time.  In recent years he's been portrayed as a vegetarian, and in all honesty, that makes a lot of sense.  Here's Superman, a god-like character who protects every living creature on the earth, someone who doesn't necessarily have to eat (or sleep), but does to appreciate the human experience.  You think he's going to just start eating birds and rabbits and sheep because other people are doing it?  Come on, Superman.  We humans do it because we have to eat to survive.  And also because it is delicious.  We're flawed beings.  But you get all your sustenance from the Sun.  You were cutting edge before solar power was cutting edge.

In any case, omnivore Superman's favorite dish is beef bourguignon.  Specifically, he eats it with ketchup.  This is something that was established decades ago, but like anything canonical (or semi-canonical) with Superman, it keeps reappearing.  In recent years, it became something of a code word between Lois and Clark, a phrase Superman could pass along that let Lois know he was okay even in the grips of some universe-shattering conflict.

Within the DC offices, it became something of a euphemism for sex between the two characters.  "Beef bourguignon with ketchup" is rather suggestive, if you think about it in the right (or wrong) way.  And though I haven't been able to find it after LITERALLY MINUTES of Internet searching, I know that there's a song where Superman references his love for meat.  Perhaps it's from the play "It's a Bird...It's a Plane...It's Superman"?  Someone help me out with that one.

In addition to these few clips from various Superman comics, there's a great scene in Kingdom Come (the extra pages added for the collected edition) where Clark sits down at a Planet Krypton restaurant and inquires about beef bourguignon.

The dish itself is fairly time consuming, but not something I'd necessarily classify as "fancy", French pronunciation aside.  It looks pretty hearty, though: 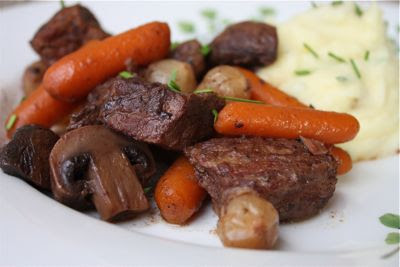 There are recipes strewn across the Internet, and they're all fairly similar, but the following is the one I'm going to try out in the next couple of weeks.  Rest assured, there will be pictures.  Who's up for eating Superman style?  Don't forget to add the ketchup.

(This comes directly from http://simplyrecipes.com/recipes/beef_bourguignon/)

METHOD
1 If you are using them, pour 1 cup of boiling water over the dried porcini mushrooms and allow them to rehydrate for 30 minutes. Remove the mushrooms and chop coarsely. Pour the soaking water through a paper towel (to remove any dirt or debris) into a bowl and set aside.

3 Increase the heat to medium-high. Working in batches so that you do not crowd the pan, brown the beef. Leaving space around each piece of sizzling meat ensures that it browns and does not steam. Don't move the pieces of beef in the pan until they get a good sear, then turn them so they can get browned on another side. Take your time. This will take 15-25 minutes, depending on how large a sauté pan you have. Once browned, remove the beef from the sauté pan and place in the Dutch oven with the salt pork.

4 When all the beef has browned, add the shallots, the one chopped carrot, and the chopped porcini mushrooms if using. Stir in the pot to remove any browned, stuck-on bits in the pan. Cook for 2-3 minutes, then add the garlic and the tomato paste. Cook another 2-3 minutes, stirring frequently.

5 Add the brandy and stir to combine. Boil down by half, then add the strained mushroom soaking water (if using). Scrape any remaining browned bits off the bottom of the sauté pan and pour the contents of the pan into the Dutch oven.

6 To the Dutch oven add the bottle of wine and enough beef stock to almost cover the beef; the beef pieces should be barely poking up out of the liquid. Add the parsley, bay leaves, thyme and cloves. Cover and bring to a bare simmer. After 1 hour, add the second carrot, peeled and cut into chunks of 1-2 inches. Continue cooking for another hour, or until the beef is tender.

7 Meanwhile, trim the tough stems off the shiitake, cremini, or button mushrooms and slice into 2-3 large pieces; small mushrooms leave whole. Prepare the pearl onions. Boil them in their skins for 4-5 minutes. Drain and submerge in a bowl of ice water. Slice the tips and root ends off the onions and slip off the outer skins.

8 When the beef is tender, use tongs to remove all the beef and the chunks of carrots; set aside in a bowl. Strain the contents of the Dutch oven through a fine-meshed sieve set over a medium pot. This will be the sauce. Boil the sauce down, tasting frequently. If it begins to taste too salty, turn off the heat. Otherwise, boil down until you have about 3 cups. Turn off the heat.

10 Returning to the sauce, reduce the heat to medium and whisk in the beurre manie. Whisk in a third of the paste, wait for it to incorporate into the sauce, then add another third of the beurre manie, and so on. Do not let this boil, but allow it to simmer very gently for 2-3 minutes. Stir in the remaining 2 tablespoons of brandy. Taste for salt and add some if needed.

11 To serve, coat the beef, carrots, mushrooms and pearl onions with the sauce and serve with potatoes, egg noodles or lots of crusty bread.
Posted by Jeff at 9:41 PM

If superman is a protector of the innocent, him funding animal exploitation for taste preference makes no sense. Even humans don't need meat to survive and be healthy, so for a character like him it makes even less sense to contribute to such horrific needless violence. And if you read correctly, superman grew up on a cattle farm but became a vegetarian LATER in the series, so not right away.

Re: Unknown's comments: Superman grew up on a farm, not a cattle ranch. His powers are portrayed variously as having been with him from infancy (Golden Age, Silver Age) to developing in his late teens (modern age), so in the later versions his eating habits would have been shaped by his parents' culture. Assuming, of course, that any Earth food would be nutritious or taste good to a Kryptonian -- which the writers seem to have done.

Golden Age (pre-1950s) Superman was portrayed as a protector of the socially downtrodden. No real mention of animals nor his food preferences.

Silver Age (1950s-1980s) Superman was a confirmed meat eater, and his (human) mother's beef bourguignon recipe was mentioned as Clark Kent's favorite dish (Superman claimed to Lois Lane that his favorite dish required Kryptonian ingredients, but that Kent had introduced him to beef borguignon, and that with ketchup it reminded him of the Kryptonian dish). The meat eating seemed to be part of the more-masculine-than-masculine image that was wrapped around him -- dodging Lana's and Lois' attempts to marry him, patronizing Supergirl, etc.

Modern Superman has very recently been portrayed as a vegetarian, so it's not exactly a core part of the character's backstory, though it is currently canonical . . . at least until they reboot their universe yet again.