Talking comics at the Friends of the Beaumont Library annual meeting, 10/24 at 5pm Eastern 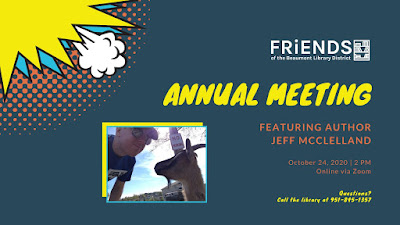 I thought about how I could make the title to this blog post shorter. There's a lot going on there. But you know what? It'll have to be long and bulky. That's just how it is.
I was recently invited to speak at the annual meeting of the Friends Beaumont Library District, and wouldn't you know, it's coming up in a few days, specifically this Saturday, October 24th, at 2pm Pacific/5pm Eastern, on Zoom. The Beaumont Library District is in Beaumont, California, so it'll almost be like I get to go out and do things! I wonder if they'll point the camera toward the window and let me look around a bit. Also, they let me use my goat picture for the flyer.
I'm excited to get a chance to talk about one of my favorite subjects - me. Er, I mean, comics. Comics is the subject. I'll give a quick talk about the industry, do a reading of an unpublished story, and talk a little about my own experiences in writing, pitching and publishing.
If you'd like to join in, you can! I'm told that this event is open to the public, so if you feel like showing up and perhaps heckling me, that is something you can do with your time!
You can find out more about this event on the group's Facebook event page: https://www.facebook.com/events/440563470256164
But I also have the direct Zoom link! And here it is! https://zoom.us/j/95795079907?pwd=N3MwRUZqTnFROFZHbEpWK1Q1QTVNdz09
I don't believe that there is a password to join in, and maybe that's something I should try and find out, because what if I'm locked out of my own talk? That would be something indeed. I'm excited about the opportunity and I hope that you'll join in, too!
Posted by Jeff at 3:59 AM 1 comment:

So Facebook is undeniably a trash heap these days, any I often find myself wondering if I should just pull the plug and delete it. I would probably live a happier life if I did, but one reason I can't quite bring myself to do it is that I get updates toward the end of every month about Brad Hill's newest Peek releases. Last month, apparently at 3:33pm, I opened up the app and found this staring me in the face: 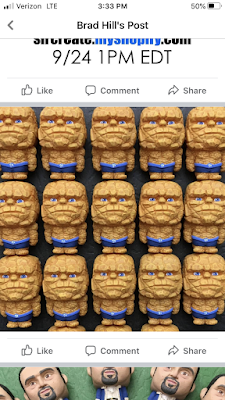 Brad Hill, also known as "SirCreate", is an artist and sculptor whose work appears regularly in Gallery1988 showings. Every month, Hill sculpts, molds and paints two very limited figures from various pop culture franchises. He calls these "Peeks" because he places the figures in a small wooden box with a window in the center of one panel...where you can peek in at the figures. I first became aware of him and his work when I saw and missed out on buying his "Weird Al" Yankovic Peek, which I'll never forgive myself for. At the time, I didn't realize how popular these items were, as they would regularly sell out within seconds of release. Still, despite my ever-lasting shame of missing the Weird Al Peek, I quickly developed a love for these little things.

We're all pretty aware of my obsession with the Fantastic Four's Ben Grimm, so when I saw that the Thing was up next on the Peek docket, I did my best to try and get one.

And then I missed that one, too, but I was able to get, and subsequently trade, the other offering for the month: Alexander Hamilton as portrayed by friend-of-Weird-Al Lin-Manuel Miranda. Was Hamilton the more desirable of the two? Possibly in 2020, but never for me, and I happily made the trade for the FF's resident orange rock monster.

It just arrived in the mail a few days ago, so let's take a look at it. First, you might be wondering just how big these figures are. Well, here's some perspective: 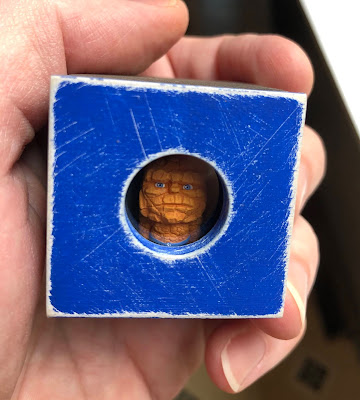 Contrary to popular opinion (right?), I do not have "Andre the Giant grabbing a can of beer" sized hands, so you can see how tiny these things really are. Each figure, this included, is right around ONE INCH in height. The level of detail for something so small is incredible. In this picture, you can just see the infinitesimal "4" on the Thing's waistband. 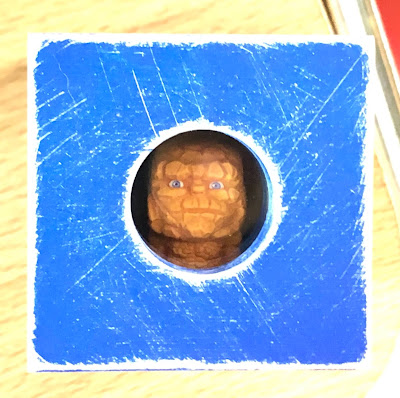 He even has blue eyes! 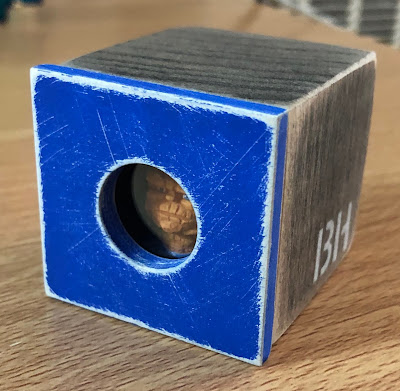 Here's a shot of the whole package, with the box branded with Hill's initials. 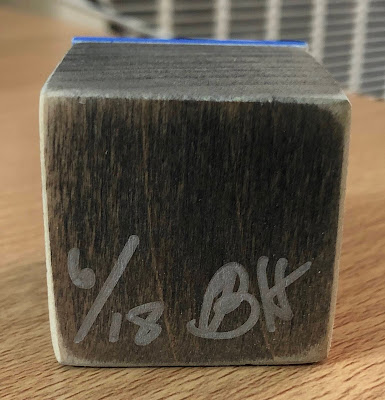 And here we can see that this - and every - production run was limited to just 18 figures. 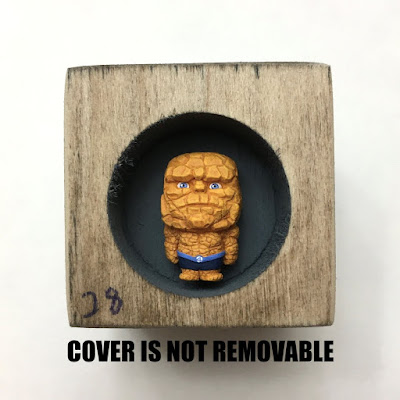 From Hill's website, we can see a picture of the Thing without the cover, which (as the image states) is not removable.
This is one of my favorite new figures of 2020, and I'm so glad that I was able to get one. I've managed to get two others in the course of the last few years: Star Trek's Worf and Howard the Duck. And maybe one day lightning will strike and someone will sell their Weird Al Peek and I can jump for joy.
Posted by Jeff at 12:14 AM No comments: