Teddy and the Yeti trading cards 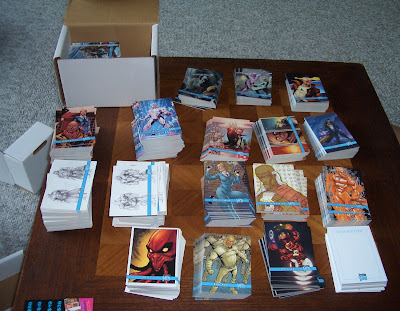 I wrote a while back about putting together some trading cards for the fast approaching New York Comic Con.  I'm happy to say that they're no longer just an abstract concept, because UPS brought the final products to my door a few days ago and boy!  Am I excited with how they turned out.

Here's the details: there are a total of 18 cards.  Cards one through nine are "story" cards, each highlighting the first two issues of the story.  Cards 10 through 17 are "character" cards, with pinup-style artwork of main characters (and, honestly, whoever I felt would look cool on a card).  Card 18 is a sketch card for...you know, sketches.  There's some great artwork by artists like Duane Redhead, Alan Gallo, Jorge Correa, Mario Wytch, Travis Sengaus, Leonardo Pietro, Karin Rindevall and Paul Little.

I'll be selling these at the show as a set, but I printed out extra copies of card one to give away.  And perhaps to practice throwing at watermelons just like they do on TV.  Check 'em out!  I'm proud. 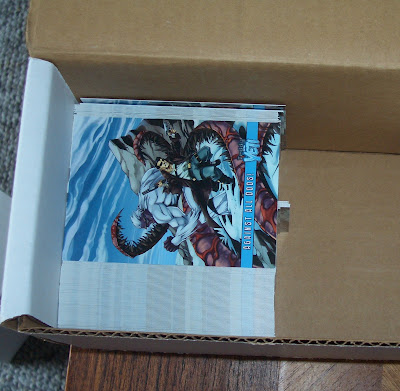 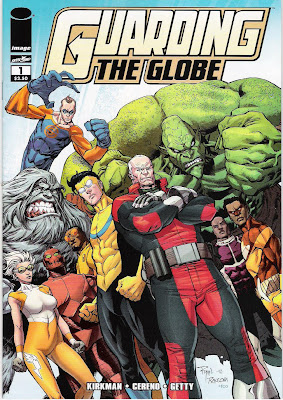 Image Comics' Invincible is one of my favorite comics - Robert Kirkman has created a classic superhero book that remains fresh even as it reaches its 75th issue.  When the Justice League-styled Guardians of the Globe recently got their own title, I snatched it up and I'm glad I did.  You might notice an interesting new character on the cover - or perhaps once you open it up it'll be more clear as to whom I'm referring: 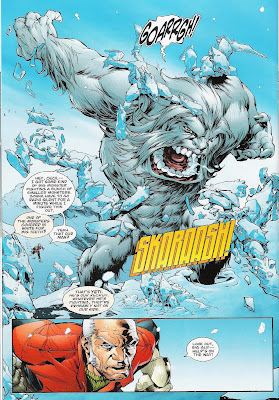 That's right - one of the new Guardians of the Globe is a yeti named...Yeti.  It's a small world, huh?

I'm happy to see the yeti getting more exposure in comics - every company has one, really - and this one looks pretty cool.  It's similar to the Teddy and the Yeti yeti in that this one talks and seems all around friendly.  It's different in that this yeti is male and has a gigantic head.  Really, what's the story behind that?

In any case, it's great to welcome another yeti into the comic book world.  NOW LET'S GET A CROSSOVER!  That'd be fun. 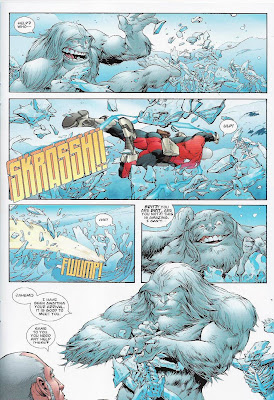 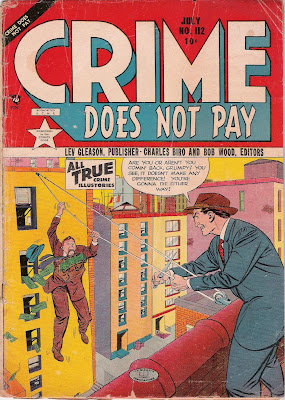 I picked up Crime Does Not Pay #112 a few weeks ago - Fanboy Comics in Wilmington, NC had a stash of golden age comics and I leafed through a few of them only to find this gem.  I've always wanted to own a cheesy Frederic Wertham-era crime comic, and at five bucks, this one was worth it.  I believe it was published in 1952, which makes this comic the oldest one I own - as much as I'd enjoy a copy of Action Comics from the second World War (maybe that one with Superman riding a huge bomb), that's probably never going to happen - and inside and out, it really shows its age.
The stories inside the creased and brittle cover are fairly mundane, with tales of crooks getting their comeuppance and learning a lesson along the way (perhaps they should have read the title of the book before engaging in criminal activity), but that's not what stood out to me.  Yes, I've talked about my unusual affinity for old comic book advertisements before, but this one's a real doozy.  I scanned it and will post it below: 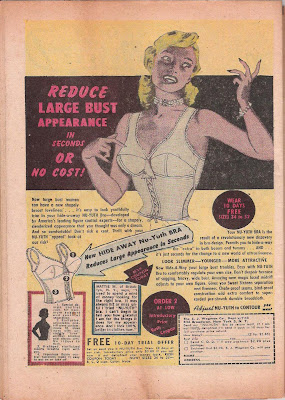 I'm baffled by this.  First by the fact that the publishers of this book would think to advertise to grown women, but more so by what's being advertised.  It's a girdle, basically, one that showcases its ability to make boobs look smaller.  Really?  Something that makes women look more flat chested?  Was there something particularly Communist about large breasts in the 1950s?  Was Joseph McCarthy holding hearings about the dangers of boobs?  Because I can't figure this out otherwise.  I mean, I realize that this ad is almost 60 years old at this point, but I refuse to believe that men in the 1950s didn't find breasts attractive to the point where one would remark "say, honey, why not hiding those girls away so I can't see them tonight? I just can't bear to look at them right now."  Preposterous!
I am curious about the "free 10-day trial", though.
Posted by Jeff at 11:53 PM No comments: 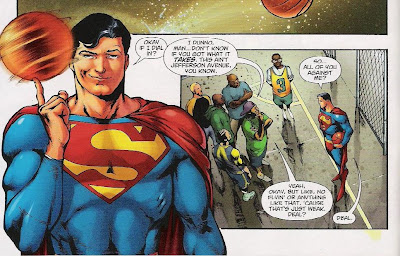 I'm a big fan of Superman - at least in theory.  The character is such an important icon in pop culture and I'm convinced that he's one of the most important figures in American mythology, right up there with, say, Paul Bunyan and Uncle Sam.  He's the fictionalized embodiment of the story of immigration to this country, with Jewish and Christian allegories thrown in the mix.  In short, he's a very deep, complex character.

That's not to say that Superman always lives up to his potential, though - being owned by DC Comics, and by default Warner Bros., means that the character is almost sure to stay stagnant as long as he remains financially lucrative, and that's a shame - he's got such potential as more than just a logo to slap on lunch boxes (but those are cool, too).

Superman recently eclipsed the #700 mark in his self-named title, while Action Comics climbs closer to #900.  Around such "anniversary" issues, companies often try to change things up a little to bring attention to the characters featured in those books.  Of course, we often get the illusion of change in lieu of real, meaningful change, but new things are nonetheless tried in times such as these.

In the a recent issue of the title Superman, a woman confronts the Man of Steel and accosts him for not saving her husband from a heart attack (or some similar ailment).  This apparently affects Superman to such a great degree that he decides to walk across the country to meet "real" people.  Why this would make any sense is beyond me - it would seem that Superman would realize that he can't save everybody, and by giving up his quest for global harmony to walk from Atlantic to Pacific seems rather self defeating in any case.  But, I suppose the editors of the book thought this would make Superman more relatable, and hey, it's their book.

Issue #702 was released recently, and it brings Superman to some fairly economically burdened cities in the state of Michigan.  Here Superman meets some young men playing a game of basketball, and proceeds to talk to them in the most embarrassing way possible.  Superman, you see, apparently needs to work on his "street" lingo, as he says Hey fellas!  Mind if I dial in?  "Dial in"?  Really?  Superman?  You can knock the sun out of the sky but you think it's okay to talk like you're on a very special episode of Full House?

Superman, the jerk he apparently is, goes ahead and humiliates those he's playing against, but wait!  It's for a good reason.  He invites the outcast of the group to play, and lets that kid strip the ball away from him - and then, miraculously, the rest of the group accepts the weaker kid as a friend.  As if they're stupid enough to believe he actually beat Superman in a game of basketball.

I don't know.  I realize that Superman comes off sometimes as a big Boy Scout, but sometimes the people in charge seem to want to make him out to be the biggest nerd alive, and I just don't get that.  He's a nice guy, a guy you'd want to be friends with, a guy you'd find it easy to trust and depend on - not the kid who was home schooled his entire life. 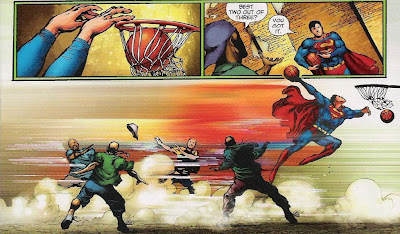 That's positive thinking for you.  It's powerful.  ONE MONTH!
Posted by Jeff at 2:47 PM No comments: 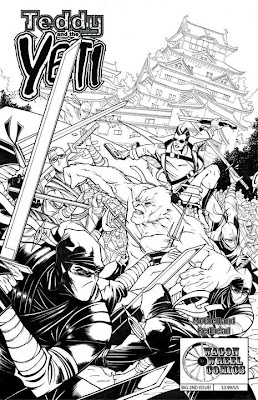 I'm a bigger fan of comics in color, for the most part, but I can also appreciate what black and white art brings to the table.  In regards to Duane Rehead's art (and I'm sure the art of most artists), the final, colored product has a different feel to it than that of the raw, uncolored version (the same is true when you compare the pencilled pages to the inked ones).  It's because of this - and also because hey, I do what I want - that I'm publishing a short run of Teddy and the Yeti #2 sans colors.  I wasn't sure about how it would turn out, but tonight as I preview the final PDF product, I'm really excited with the idea of getting this out in front of people.

Duane's art is very stark and sharp, and I think some of that sharpness is dulled a bit once colors are introduced to the product.  That's not a knock on the colorists who work on the book - I've been very lucky to have such consistently good coloring - but more of a reflection on Duane's work.

I'll have copies of this book with me at the New York Comic Con in October.  Even if you've seen the regular version of issue #2, come and check this out.
Posted by Jeff at 11:18 PM No comments: