Happy Thingsgiving, everyone! THINGSgiving, right? You got that? Thingsgiving. Yes.
Let's, uh, check out a new entry in the long-running Thing sketchbook post series! 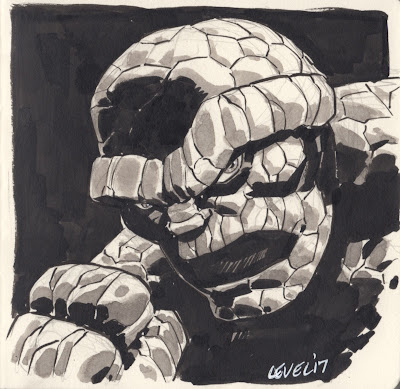 Brian Level - New York Comic Con 2017
This is the only Thing sketch that I managed to get at NYCC 2017, but I like to think that I made it count. It's from Brian Level, a friend from the FUBAR days that has since gone on to work on a number of books for Marvel and other top-tier publishers. 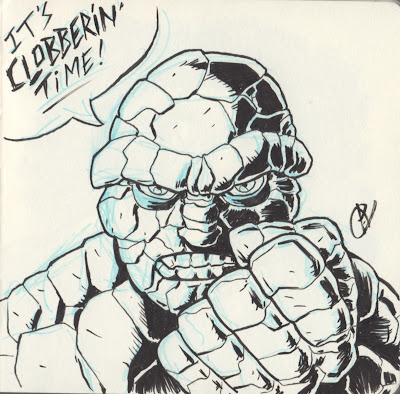 Alex Harris - Free Comic Book Day 2018
For FCBD in 2018, I spent the day in Boston at a few different New England Comics locations, signing copies of The Tick and catching up with friends. Alex Harris drew a short story that I wrote for the Tick #2 (2018 series); I got an opportunity to hang out with him at a signing on this Saturday morning, and, of course, I asked him for a Thing sketch. I appreciate the fact that he knows how to properly spell "clobberin'". 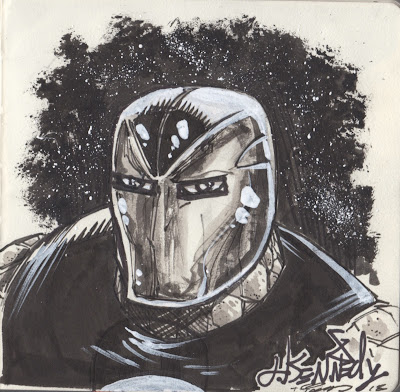 Jay Kennedy is a local Boston artist who took my spot at the signing table once I moved on to another store. He did a quick sketch of the helmeted Thing that Ian Nichols finished up later in the day. This is peak mid-'90s Thing! 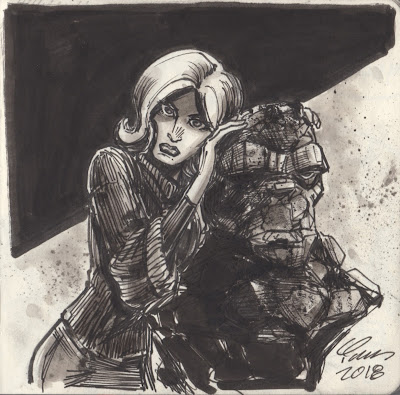 Ian Nichols is my friend and frequent Tick collaborator, and he provided a couple contributions to my previous sketchbook. This is a new sketchbook, so it's fair game to ask him to draw once again in this book! This sketch is a different one, and I love it for that fact. It's Alicia Masters with a bust of her favorite subject, Ben Grimm. 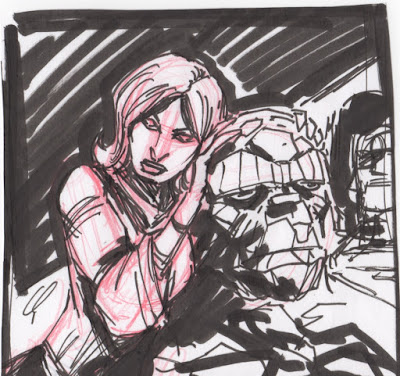 The evening of FCBD, I left the sketchbook with Ian, who returned it when we saw each other again a few months later at Comic-Con in San Diego. Ian included this rough sketch on a separate piece of paper. Note the bust of Dr. Doom in the background! 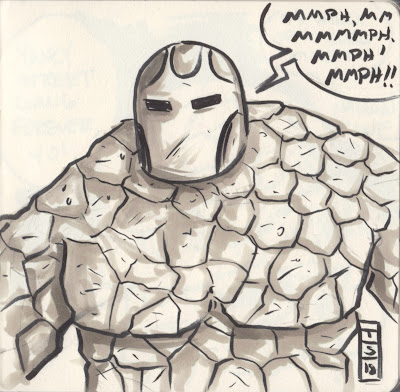 Tony Sedani - Free Comic Book Day 2018
Here's the last one for now, another helmeted Thing by Tick contributor Tony Sedani! Tony's a really nice guy and I was happy to meet up with him for a little while at FCBD. And he's right - the helmet doesn't actually have a mouth hole, so wouldn't get it a little, uh, uncomfortable wearing it? Looking back, this was a big day for me as I got parts of four sketches on one day! 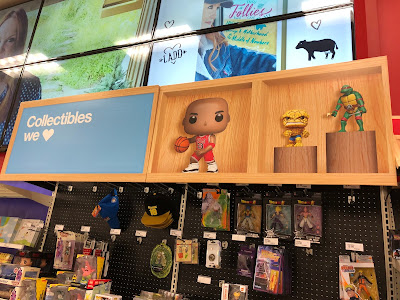 There'll be more Thing sketches later, but before we go, I was in Target a few days ago and, of course, I stopped in the toy section, only to see a long, multi-panel cardboard display showing off a lot of collectibles - including the new Funko Pop Thing! How in the world am I going to convince Target to let me have this giant display, and where am I going to keep it?? 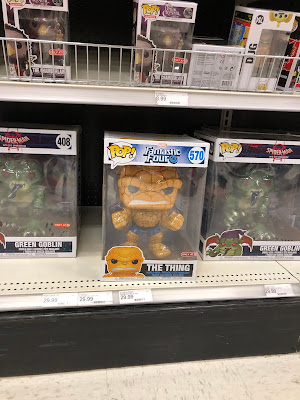 While I was there, I (naturally) checked, and yes, the Target-exclusive 10-inch Funko Pop Thing is still available! It's a great Christmas present, folks.
Posted by Jeff at 1:20 AM 3 comments:

Here's a new, strange comic strip that I recently put together with my friend and Bulwark co-creator Andrea Schiavone! Read it, look it over, and then wonder what in the world is happening in it! It's okay to be a little confused, because, honestly, that was part of my intent. Why? Well, I have a blog, and I guess I can use it to spend some time explaining. IT'S A BLOG, GUYS. That's what we do here.

A few months ago, I purchased some original art from the "Brenda Starr" comic strip, from all the way back in 1981! I can't say that I'm a big fan of Brenda Starr, but I am a big fan of artist Ramona Fradon, and this strip is from her long run on the syndicated series. I'm really excited to have some more original Fradon art, as she's nothing short of a legend.

Anyway, I like the strip and have been thinking about making one of my own as something of an homage to not just Fradon and Brenda Starr, but to newspaper comic strips in general. The opportunity presented itself just recently (and I, on this blog, will elaborate on that), so I contacted my friend Andrea and we put together the above.

I had a few goals that I wanted to accomplish. I wanted the strip to have a worn feel to it, as if it had just been found in a filing cabinet or something after decades in obscurity. I wanted it to be melodramatic, kind of like Brenda Starr. And I wanted it to be very weird. I think I accomplished all of those goals, but just to put it over the top, the first version I made was written in Italian:

Now, I do not know Italian, but Andrea not only does, but also IS Italian, so he was able to translate the text into what you see above. Andrea also added in the aging effects, which include yellowing, ink splotches, a coffee ring, and some creases along one corner. The original inks looked like this: 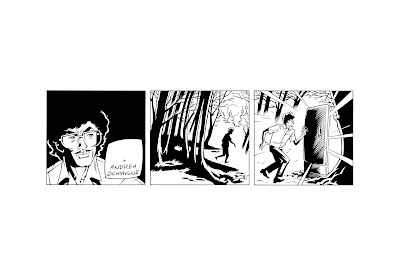 I added a Hawaiian pattern to the shirt in the first and third panels...so if you were asking yourself if that is supposed to be "Weird Al" Yankovic in the strip...well, to start, this must be the first time you've seen any of the work I do, because OF COURSE it's Weird Al, but further...yes, it's Al.
Giving this comic the title "Midnight Starr" served to pay homage to both Brenda Starr as well as Al, because "Midnight Star" is the title to one of Al's classic original songs from the album "In 3D". It ALSO serves as the name of the premier 1990s Weird Al fanzine, which, in a very roundabout way, brings us to this: for the past few months, I have been working on a one-issue revival of the fanzine, and I put together the Midnight Starr comic strip to include in the issue.
The issue itself has a lot of different things in it - articles, pictures, interviews (I got to interview Al for an "Ask Al" segment!), but as comics and artwork will always be special to me, let's look at a few more highlights in that category. 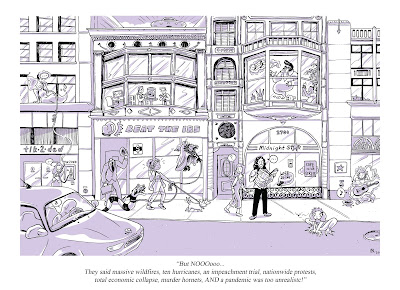 Here's a one-panel comic from fellow Al fan and Planet Comics contributor Kelly Phillips! Kelly went above and beyond with this comic, which features just a ton of inside references to the Midnight Star song! 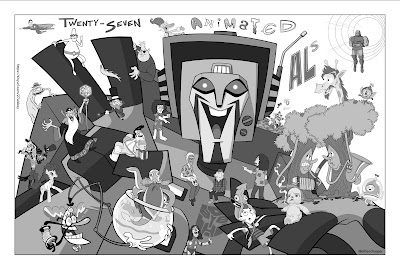 The back cover was meticulously drawn by my friend Ethan Harper. Ethan is a storyboard artist on a number of productions, and I met him earlier this year in Los Angeles for Al's New York Times Magazine photoshoot. Ethan drew a whopping 27 animated characters, each of which is voiced by Al himself. 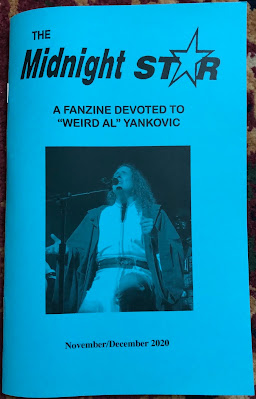 Here's what the finished product looks like! This is kind of an "I guess you had to be there" thing, as the design is in line with what the magazine looked like during its run from 1993-98. If you'd like to read the thing, I've got a PDF that anyone can view for free, right here: https://www.dropbox.com/s/8hfkj1r62xmsz3c/The%20Midnight%20Star%20-%20November%3ADecember%202020.pdf?dl=0
I've also got physical copies for sale in my Etsy shop! In 2020, this counts as a new publication for me.
Posted by Jeff at 4:09 AM 1 comment:

All the Ticks! (Plus...more Ticks) 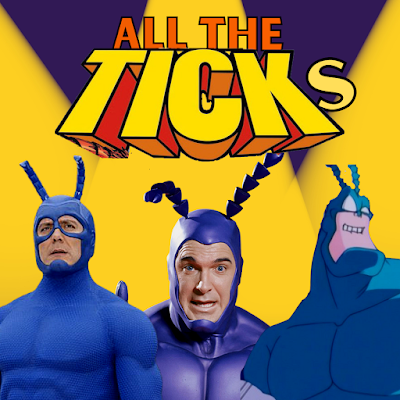 There's some exciting new Tick content coming your way very soon, in the form of a Tick reunion featuring every television iteration! On Sunday, November 15th at 7pm EST, House Seats will stream the gathering in which each cast will read unproduced scripts. All three Ticks: Townsend Coleman, Patrick Warburton and Peter Serafinowicz, all four Arthurs: Micky Dolenz, Rob Paulsen, David Burke and Griffin Newman, and plenty of co-stars like Val Curry, Yara Martinez, Liz Vassey and Cam Clarke will be there! And to top it off, creator Ben Edlund will be there, leading the charge.

This is obviously a big deal, and it's the first time that all three casts will be together in the same virtual space. Best of all, the ticket proceeds for this event will benefit food banks across the country. If you haven't yet, you can get your tickets here: https://houseseats.live/2020/11/15/all-the-ticks/. And if you worry about missing the event because, say, the 8-0 Steelers are going to be playing at around the same time, don't worry, because the video will be available to view until November 22nd!

I'm really excited to see all of these fine folks again. 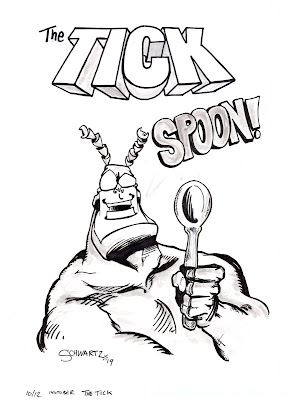 While we're here, let's look at a few new Tick items that I recently picked up!

The first is an original sketch by Chris Schwartz, who drew this classic Tick for his 2019 Inktober challenge. There's a lot of blue line that the scanner doesn't pick up, too. The artist certainly got the square jaw down. 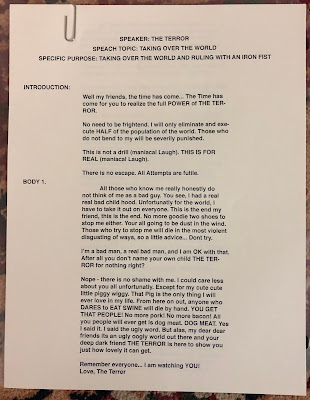 Next up, here are two more props from the Amazon Tick series that I managed to grab recently. This one is The Terror's world domination speech from the end of season one! 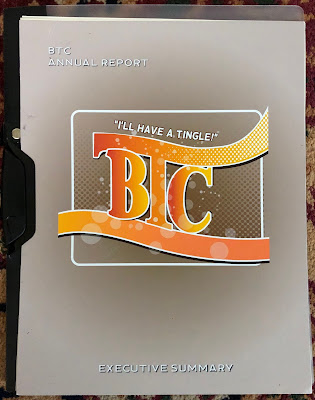 And here's an annual report for the Terror's Brown Tingle Cola company. This is a folder that has a lot of actual, very official-looking graphs and charts inside. 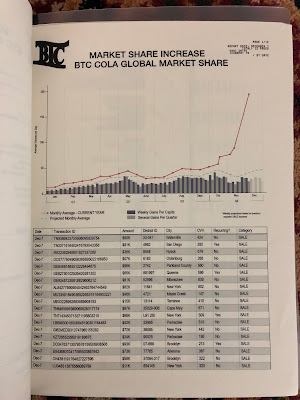 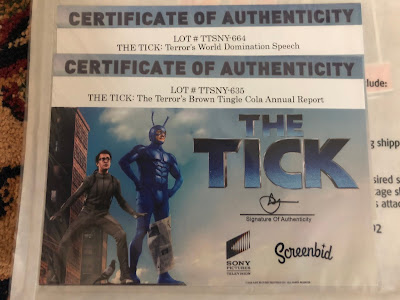 Here are the two branded certificates that came with the items!

That's it for now. Spoon!