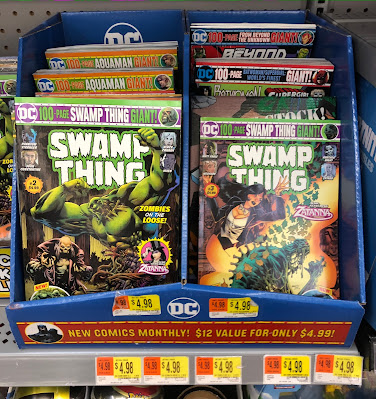 So the rumors are true - DC's 100-Page Giants line is no more. The once Walmart-exclusive titles that became shared comic store books with new stories have been replaced with pre-packaged collections of existing titles. I went to my local Walmart a little while ago and, for the first time in almost two years, found no new Giant titles on display.
I don't know why this bums me out so much - the overall quality of the Giant titles wasn't exactly stellar, and I'm not really old enough to be nostalgic for the first run of 100-page DC books from the '70s. I suppose that I was enamored by the potential of this line: a small run of titles for a good price point with new material and reprints sold in a popular retail chain - what's not to like? Comic companies don't do nearly enough outreach, and this felt like, for the first time in a while, someone was doing something to pull in new readers with a fun new format.
It's especially a shame that the books had to end like this, because many titles finished up mid-story. May's Batman Giant #5, Flash Giant #5 and Swamp Thing #5 became de facto Walmart exclusives, because those books won't be printed for the direct market, as previous issues had been. And Superman Giant #5, scheduled for June, won't come out at all. I'd imagine that DC will publish the new stories meant for that issue digitally, but it's a shame the titles won't at least make it to their respective sixth issues, when all of their storylines would have presumably wrapped up. 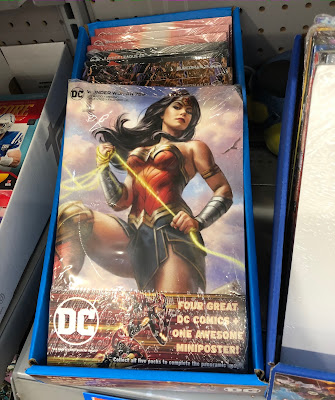 DC's new offerings are cellophane-wrapped four-packs of previously published comics, with, I think, some new covers. This is similar to what Marvel is doing with their shelf space at Walmart, and it feels a bit lazy to me. I never thought that DC would end up following Marvel's lead in this, as opposed to the other way around (I would have killed for a Fantastic Four equivalent of a 100-Page Giant title). The new collections are $9 items as opposed to the $5 Giant books, so they're not the same type of impulse buy I imagine the Giant books were. 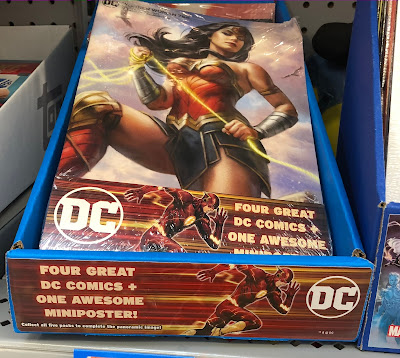 Even the display, which was one of the cooler things about the Giant line, is smaller and more subdued. 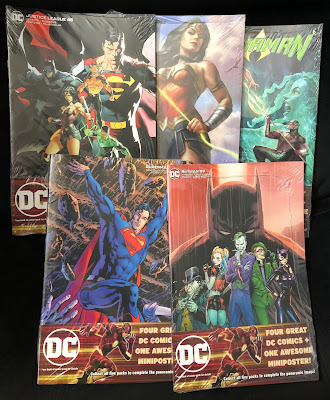 This is not to say that I don't remain a sucker for comics in retail stores, as I picked up the five offerings for June.
Part of me is somewhat relieved, I suppose, as my "to read" pile grew considerably over the last two years, mostly due to the Giants line and how I was adding the equivalent of around 20 books to my stack each month after I added titles like Superman, Batman, Wonder Woman, Flash and Swamp Thing to all of my regular comic shop titles. Now I'm able to make a dent in some of the books that have been piling up, but I'll still miss these fun titles that always felt special.
Batman Giant, it seems, wins the race for most issues published at 21 between two volumes, just edging out Superman Giant by one issue. I've got complete runs of most of the Giant titles; when the books lost their exclusivity in 2019, I cut back on some books, but now that they're all done for good, why not grab those extra issues of Wonder Woman and Aquaman?
I hope that, if nothing else, DC helped comics claim a little bit of shelf space in Walmart (and the same goes for those two Target Giant comics, too) for the future, and I hope that they don't let the opportunity go to waste. Comic shops are the backbone of the retail industry, but putting comics in high-traffic areas like the Walmart checkout line can be nothing but a good thing, in my opinion. 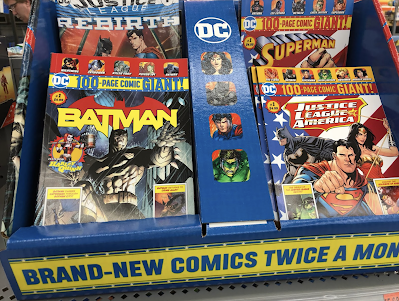 Here's a picture of the display as it looked in July of 2018. I remember how excited I was to see these new books in a new location. Oh, and I, uh, eventually took the display home with me (but not until they replaced it with a new version). Here's hoping for new and better things in the future.
Posted by Jeff at 2:58 AM No comments: 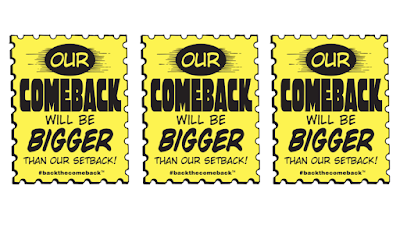 The comic book distribution shutdown is over, and comics are slowly making their way back to stores on Wednesdays once again. Things have changed, though - DC has left Diamond completely and will ship Tuesday-arriving books independently; Marvel is only shipping new comics every other week; both Marvel and DC are skipping their comic shipments for a week in late June; many small publishers won't be shipping any books at all until at least August. These are unprecedented times in the comic book industry.
About a month ago, I made a post about some of the books I have been working my way through since I've now actually got time to read them. With the slow trickle of books that have come out since things started up again, I find that I'm still working my way through my big stack of unread books. And since I had fun making that first post, I thought I'd make at least one more and show you just what I've been keeping busy with while I am making progress with my "to read" stack. 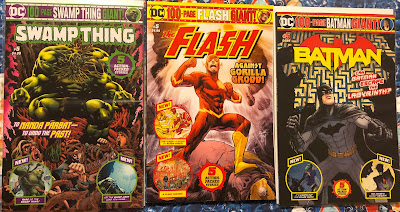 Even though comic store distribution came to a halt throughout most of April and May, the Walmart DC Giants have shipped on schedule. I usually get these three titles through my local comic shop, but it seems that the direct market versions of Swamp Thing and the Flash might be cancelled? When I read this, I drove out to Walmart and grabbed the mass market versions of all three...just in case. The novelty of this line has yet to wear off for me. 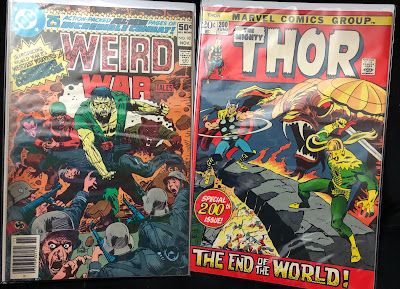 Next up on the list are two back issues, Thor #200 and Weird War Tales #93, with the first appearance of the Creature Commandos. They were both interesting Bronze Age books! 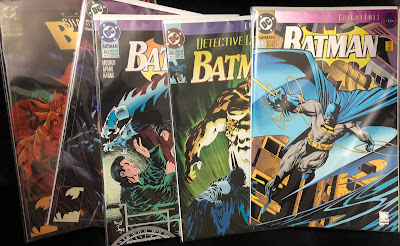 I grew up reading the Death of Superman storyline, but I never picked up more than a few issues of Batman's Knightfall saga. These issues aren't too expensive to find, but with Knightquest and Knightsend added on, there are a lot of issues out there. I still need to find just a few Knightquest issues, but I have finally made it through the big Knightfall story, culminating with Batman #500. The issues got pretty repetitive after a while, but I enjoyed it - though I'm sure I would've been mad about DC replacing Batman at the time. 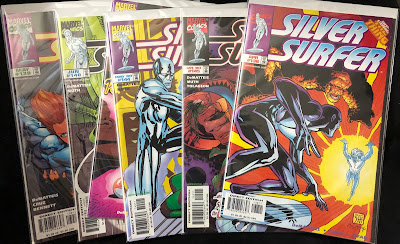 Right around the time of Heroes Reborn, JM Dematteis had a fairly long run on the Silver Surfer title in which ol' Norrin Radd has adventures with (and space-dates, I guess) Alicia Masters. I managed to get all of those issues a while back but only recently got a chance to read them. There were some real moments of brilliance in this run! Plus the Thing showed up in a few issues, which is always a plus! 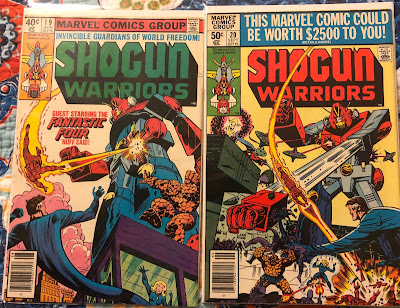 Next up on my list are two issues of Marvel's Shogun Warriors book, both guest-starring the Fantastic Four. I do not have high hopes for these! But I had to get 'em anyway. 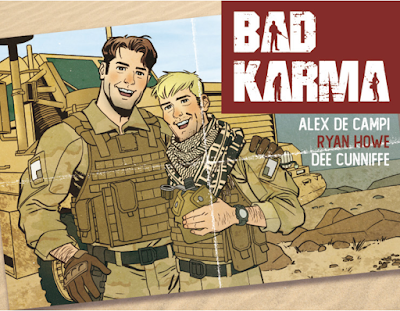 If you're looking for some digital comics to read, why not try out Bad Karma from Panel Syndicate? Art on this new title is by Black Terror artist Ryan Howe! 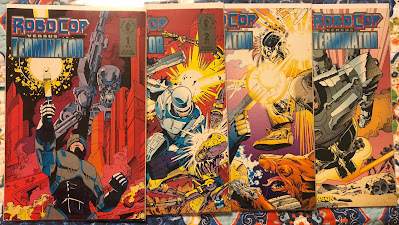 Lastly, I found this RoboCop vs. Terminator series for a good price and picked it up few weeks ago. Firstly, the concept looks like a no-brainer, and secondly, it's by Frank Miller and Walt Simonson! Let me tell you - it did not disappoint. These two comic book creative giants are at their prime in this four-issue series from Dark Horse. I'm not even necessarily a really big fan of either franchise, yet I loved every page of this gem. 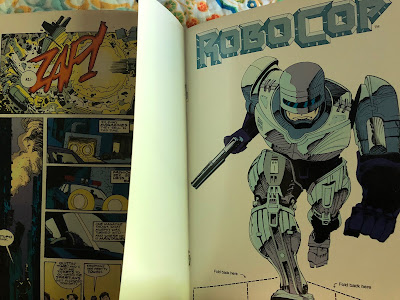 Plus each issue came with a cardboard centerfold cutout! Yeah!! 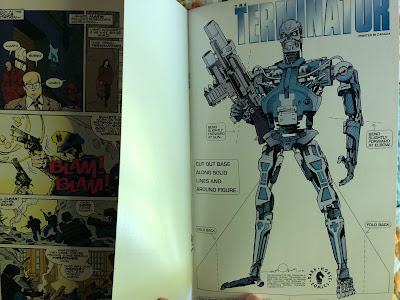 If you have a chance to pick up this series or the subsequent collection, do it! It's well worth it.
That's it for now. I hope that everyone is well and has enough comics to get them through these tough times.
Posted by Jeff at 2:21 AM No comments: