New Teddy and the Yeti at PIX on April 2nd!

The Pittsburgh Indy Comix Expo is this coming Saturday, and I'll be there with a new issue of Teddy and the Yeti! 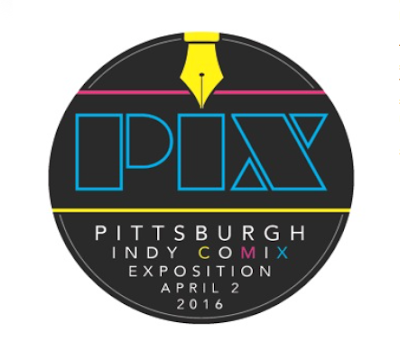 I went to PIX last year for the first time and had a lot of fun. This one-day convention is a small affair, and most of the attendees are local creators. I just booked a table because I also just got a brand new issue of Teddy and the Yeti back from the printer. 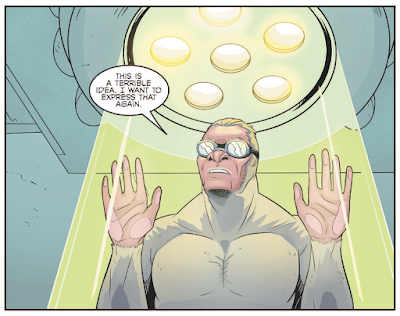 This issue is half the size of a standard comic (similar in size to the Naked Man at the Edge of Time comic) and has art from Pittsburgh's own Meredith Moriarty. I think Meredith did an outstanding job in capturing the characters while giving it her own flair. On colors we have Tomas Marijanovic; Pietro put together the gatefold cover and Joe Badon drew a pinup for the back. 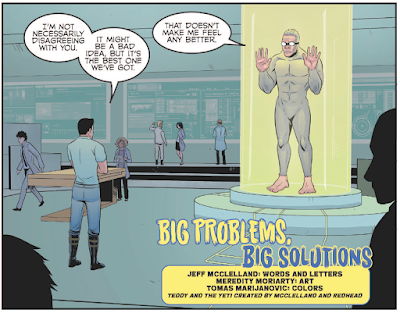 Here's a three-page preview of the issue to go with the cover. I'll have it on sale at the convention for the first time - and I might even have a new trading card to give to anyone who buys a copy as well (because I can't resist). 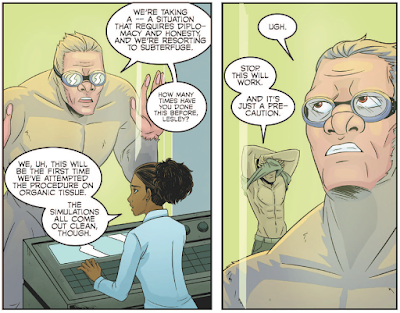 The show runs from 11am-6pm with programs from 7:30-11 at night. There's no charge for parking or admission! So show up! You can find more info here: http://pixcomics.blogspot.com. 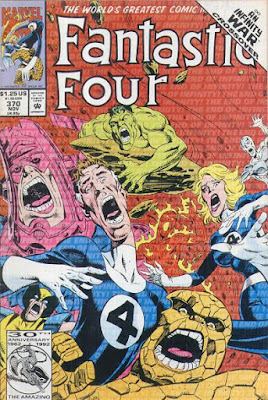 Earlier today I learned that one of my favorite artists, Paul Ryan, had passed away at the age of 66. I haven't read anything about a cause, but I was stunned to learn this not only because Ryan was still relatively young, but also because I grew up reading his run on Fantastic Four with Tom DeFalco. Ryan is one of the reasons that I love the FF so much, and his years-long stint on the book is still the third-longest in the title's history, behind only Kirby and Byrne. In fact, I learned today that Ryan's first Marvel work was as an inker on the '80s Thing series!

Ryan drew in a classic style that I've only become more appreciative of as I've gotten older. It was the perfect amalgamation of Kirby, Byrne, Swan, Anderson, and other classic, steady styles of the Golden, Silver and Bronze ages. Back when the extreme (and silly) art styles of 1990s Image Comics were all the rage, Ryan's art was a consistent, solid presence on one of comics' greatest titles. He's known for his work on Superman, Flash, Avengers, Iron Man, DP7 and currently the Phantom comic strip, but he'll always be a Fantastic Four artist to me, and one of the greatest. The above cover to issue #370 was the first issue I bought with my own money, back in '92 at the Uniontown Mall. 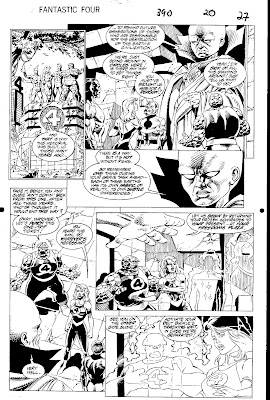 I was very fortunate to have the chance to work briefly with Ryan a few years ago, when I contacted him about a commission and some original art. I purchased this page from Fantastic Four #390 for the paltry sum of $100. I decided to press my luck and was able to get some comics signed and, for a little extra, I got this Thing sketch card mailed to me: 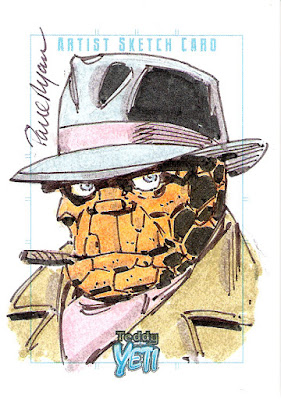 The thing I'm most thankful for, though, is that I actually got the chance to commission an original Teddy and the Yeti cover from Ryan. His website said that he wasn't taking commissions at the time, but after talking to him for a little while, he told me that his website developer simply hadn't updated the site and that he was indeed taking commissions. 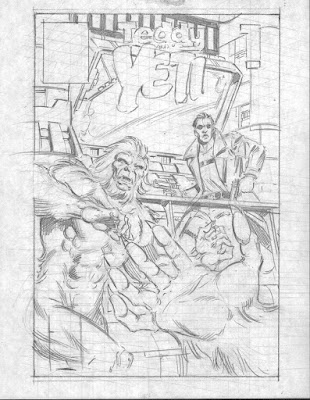 I jumped at the news and a few weeks later, he sent me the original art that you see here, including a rough sketch and full-size pencils. 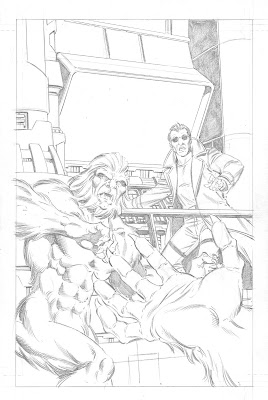 The cover was eventually completed by Duane Redhead (inks) and Karin Rindevall (colors). I'm so happy that I had this done when I had the chance. It's a real shame that there won't be any more work out there by Ryan after his run on the Phantom strip ends, but he has a legacy of decades that still holds up and will for years to come. 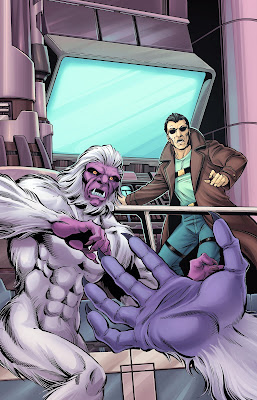 At a FUBAR signing in 2013, I asked Rafer Roberts to draw a version of the Thing with his helmet, a trademark of '90s Fantastic Four. After I brought up the idea, he immediately said, "oh, you mean Paul Ryan?" Rafer, I think, has a similar understanding of '90s FF and he cranked out the lovely rendition that you see below. I'll miss Ryan and his work. I'm glad that I had the chance to interact with him in a small way. 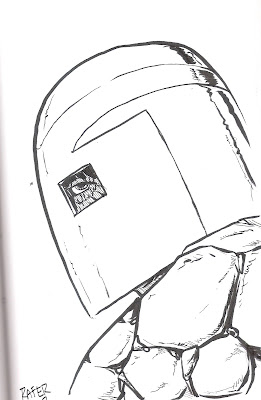 At the Central PA Comic Con? Pick up FUBAR: War of the Roses 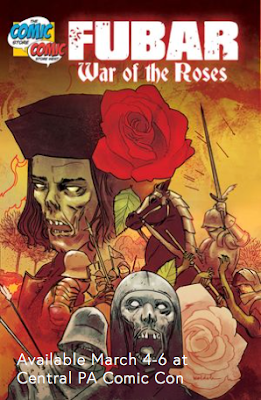 A few months ago, Jeff McComsey and I put together a new FUBAR story that debuts this weekend at the Central PA Comic Con. Comic shop "The Comic Store" has two locations - one in Lancaster, one in York, and so they brought up the idea of doing a story based on the War of the Roses and the struggle between the two eponymous houses. The end result is FUBAR: War of the Roses (with a cover by Brett Weldele), and there are a few places where you can grab a copy if you'd like. 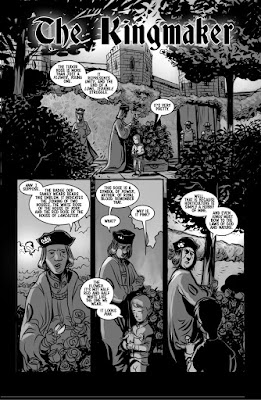 The first is at the Central PA Comic Con, which started yesterday and rolls into tomorrow, March 6th. You can find out more about the show here: http://www.centralpacomiccon.com/home.html 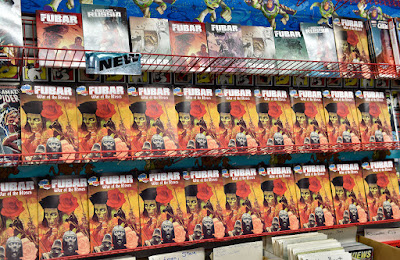 Lancaster Online ran a nice story about the book, which you can read here: http://lancasteronline.com/features/lancaster-and-york-comic-shops-create-war-of-the-roses/article_46a57528-e171-11e5-9a47-a31c80a07135.html

They even made a video about it:

This is our first exclusive FUBAR book and it's neat to see. Maybe we'll see more in the future if all goes well. Thanks to the folks at The Comic Store for setting this up.

EDIT: The book has been spotted in the wild! Very neat. I hope sales are brisk. 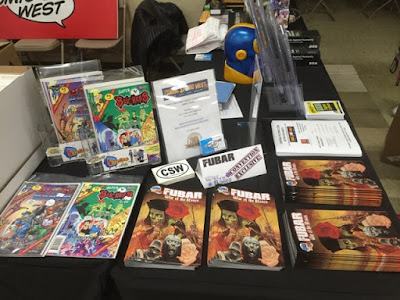