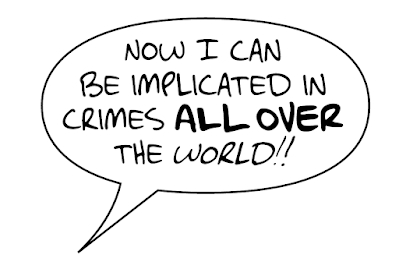 I've spent the past few months trying to shore up some of my comic book lettering skills. I've lettered in some fashion for years at this point, but there are still things at which I'm not really proficient. This is partially because I'm lazy, but also because comic book lettering is, in many ways, Wild West-like in how people approach it. There aren't a lot of definitive resources out there, and a lot of what I've learned has simply been through trial and error. Nate Piekos did us all a great favor in publishing his The Essential Guide to Comic Book Lettering late last year, and I used that as a motivator to finally get some answers to questions that I've had for quite a while. If you're interested in lettering for comics, this book is a great resource!

One skill that I never really thought I'd acquire is creating a font from scratch, but I recently came across the video below from Joshua Smeaton, in which shows how he created a font using his own handwriting:

This was enough for me to start working on a font of my own, and pretty soon I was writing out panagrams - sentences that use every letter in the alphabet. Rather than using a digital tablet or an iPad, I hand-wrote all of the letters so they felt more natural. My handwriting is not what I would call artistic or even all that good, so I tried my best to make everything legible while still maintaining my own style. I used comic book backers for this, so now I have a stack of these bizarre ramblings in my house. If anyone would just stumble upon them...well, I guess I have weirder stuff lying around as well. 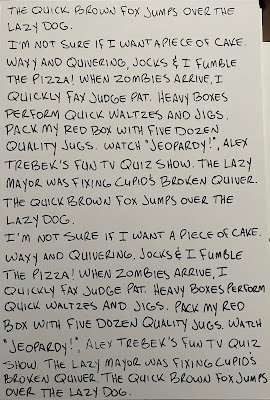 The whole process has been long and involved. I scan the letters into Adobe Illustrator, where the program traces them and makes them individual objects. After choosing what I feel are the best letters, I bring the letters into Fontself, an Illustrator extension, where the work gets even more meticulous. Not only am I looking to create a regular, all-caps font that I can use in comics, but the completist in me has put in motion a lowercase version, too, complete with alternate symbols for almost every character. In addition to this, there are bold, italic, and bold-italic versions that many good fonts need, plus symbols and other letters that are more common in Spanish and European countries that I'm trying to incorporate as well. 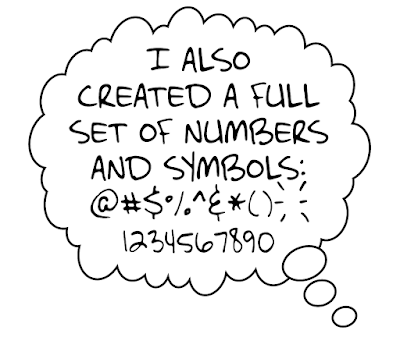 In all, this has been a ton of work, but the results are, so far, fun and at least somewhat encouraging. The above balloon looks okay, I think, though I'm continuing to tweak things that I think could be better. I figure that I'll be at this particular task for another month or two before I finally put it to rest. But at the end, I'll have a font that is completely my own and not subject to any licenses or agreements, and hopefully one that I find some uses for, too.
I've named this particular creation the McClellafont, which is a bit self-centered of me, of course, but it's mine and I'm owning it. I considered different variations of spelling like "McClellaphont," "McClell-O-font," "McClellephant," and other, worse options, but "McClellafont" is what we're going with for now.
While I'm waiting for the paint to dry on the McClellafont, I went ahead and made a much simpler font using a similar method, based on the keystrokes of my much-ballyhooed 1930s Underwood typewriter.

For this one, I typed up a bunch of text, scanned the letters, *painstakingly* adapted them in Photoshop, and then brought them into Illustrator, where Fontself took care of the spacing and kerning. Manual typewriters have fewer keys than a modern keyboard (mine does not have a key for the number 1; you use a capital I as a substitute), so this one had fewer characters to use.
This font, which I am unimaginatively calling "Underwood 1930s," features a regular and italic version with numbers and all of the symbols that are included on the actual typewriter. The one exception is the exclamation point. If you wanted to exclaim something using this machine, you needed to type a period and then draw in the top line with a pencil or pen. I felt that I couldn't be without one (I get excited sometimes), so I created one using two existing symbols, and the result is what you see above. I made a few tweaks before I was happy with the final version, as seen below:

I can hear the clickety-clack of the keys and the thunk-thunk of the carriage as I read the words! I'm not sure how often I'll use these fonts, but it was interesting to make them and I'm happy I did it. I have plans for maybe one or two more before my font-creating career comes to a close. But maybe you'll see one or both fonts in a published comic book before too long.
Posted by Jeff at 11:32 PM No comments:

It's the 25th installation of the (very popular) Thing sketchbook series! That means we've seen around 125 of these beauties so far. Let's see what these five look like, who they're from and where I got 'em! 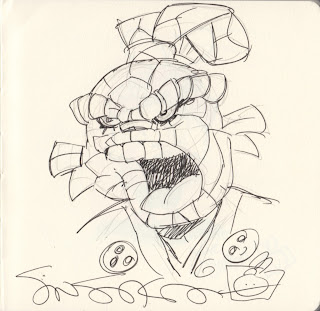 Stan Sakai - Comic-Con International 2019
Stan Sakai is a legendary artist who has spent the last few decades working on Usagi Yojimbo, which is an absolute masterpiece. I found him at his usual spot at Comic-Con in San Diego and thought I'd take a chance to see if he would draw the Thing in the ol' sketchbook. I handed him the book and paid the money, and then the negotiation began. At first he said he didn't want to draw the Thing, but thought about it for a minute and asked if he could draw his famous samurai rabbit as the Thing, and of course I agreed. This is one of the stranger entries into the sketchbook, but it's Stan Sakai, it's Thing-like, and I'll take it. 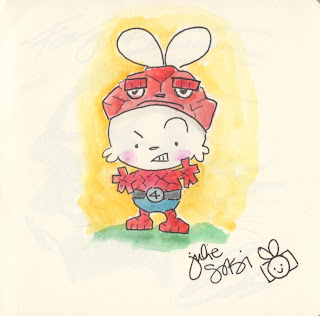 Julie Sakai - Comic-Con International 2019
Julie Sakai, artist on the Chibi Usagi feature and Stan's wife, was at the table with Stan while he drew his sketch. After he was done, we slid the book right over to her and she drew this lovely Usagi-as-the-Thing color illustration. It's like Usagi is dressing up as the Thing for Halloween, and I heartily approve. 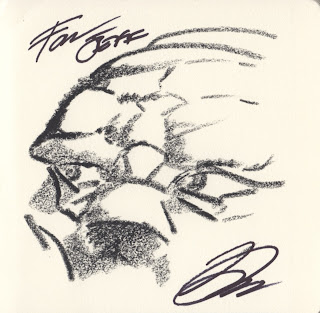 David Lloyd - Comic-Con International 2019
David Lloyd had a booth across from New England Comics' space at this show, so I kind of staked him out all weekend. Toward the end of the show, I found a time when he didn't have a crowd in front of his booth and I made my move. Lloyd, of course, is the artist on the classic V for Vendetta, and it was a pleasure to get to talk with him about comics while he sketched this rather spooky-looking Thing. 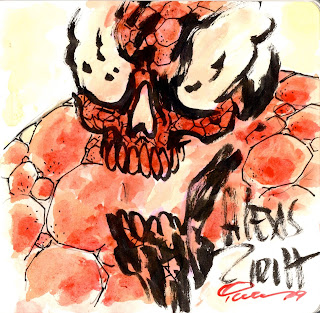 Alexis Ziritt and Ian Nichols - New York Comic Con 2019 and Rhode Island Comic Con 2019
Is this the Thing from Hell? If so, he's my favorite demon ever. Alexis Ziritt, who draws such wild stuff for books like Space Riders, started this sketch off with a flaming skull that is something of a trademark for him. My pal Ian Nichols finished it off by adding some colors and a wide frame for this Ghost Rider-esque Ben Grimm.
Okay, there are admittedly some very different Things in this entry. Let's wrap it up with a more traditional-looking Thing: 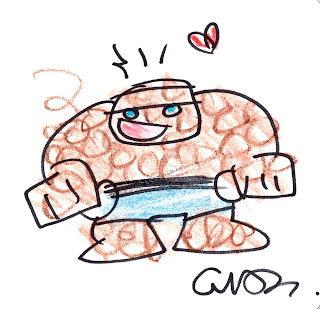 Art Baltazar - New York Comic Con 2019
Art Baltazar makes really wonderful kids comics like Tiny Titans and Aw Yeah Comics, and it's easy to see his broad appeal with this marker-and-crayon, very happy Thing sketch. Ben is so happy that it looks like he's beginning to unravel a bit! I saw Baltazar drawing sketches and I very tentatively approached him about joining the book - it's always a bit nerve wracking to barrel your way toward a booth with a book in hand - but he agreed to draw something and that's how we ended up with your good pal Ben here.
We're nearing the end of 2019 in the sketchbook - I hope nothing comes out of left field to really disrupt convention sketches in the near future. Er, I'll see you all next time!
Posted by Jeff at 10:04 PM No comments: