It's time for the last batch of pictures from the 2018 New York Comic Con, on an overcast Sunday. I don't usually make it to NYCC on Sunday, but this year I had two fairly big reasons for being there, and it was fun to be there until the show closed down for the year. Let's take a look at the pictures! 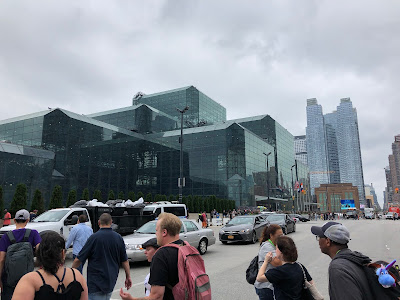 Here's the Javits Center on a gloomy Sunday morning. 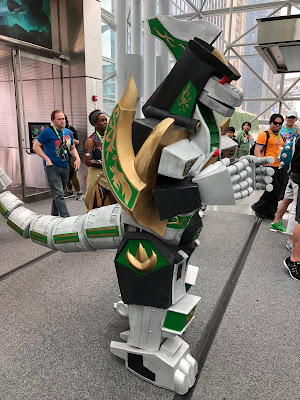 Is this...a Power Rangers thing? Either way, it's good work. 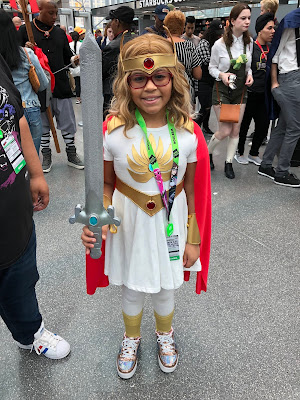 She-Ra had a big presence at the show, despite the new cartoon not having aired yet at the time. I'm happy to see how popular it's become since. What a great way to welcome young girls into nerd culture! 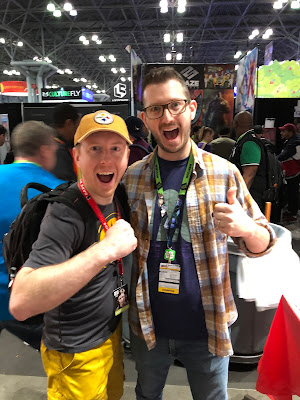 I was (apparently) very excited to see my friend Oliver Mertz on the show floor! 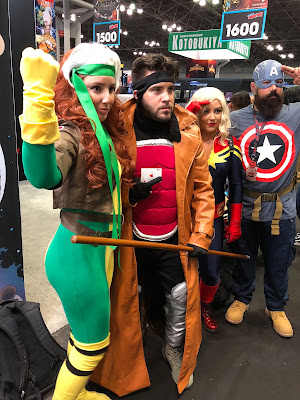 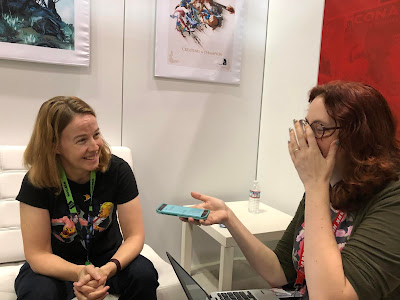 Early in the day on Sunday, I met up with Jennie Wood and we walked over to the Dark Horse Comics booth. This was a big day! We got to go into the inner workings of the booth setup, into the meeting area, where we sat down for an interview with Comics Beat writer Edie Nugent! We talked about, among other things, the Flutter collection which was on the cusp of being released at this time. 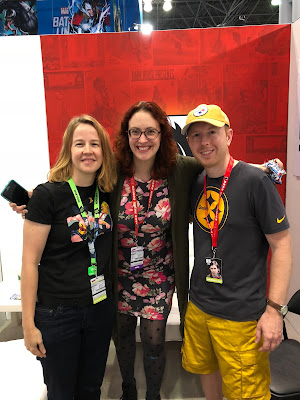 I was only slightly nervous during the whole thing (and Jennie did most of the heavy lifting, naturally). But someone delivered snacks during the interview, which was right up my alley, of course. 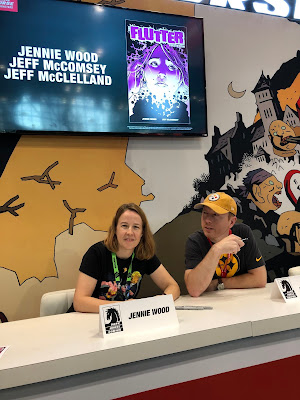 After the interview, Jennie and I stepped out into the signing stage where we had a special signing to promote the Flutter Collection! Jennie is, of course, the one who set all this up, and I was happy to be along for the ride. It was a fun experience that I won't forget. And if you wonder how dedicated I am to things like this, just know that I missed the first half of the Steelers game for it, which is a big deal. Obviously, I still ran around in black and gold, like an annoying away team fan. 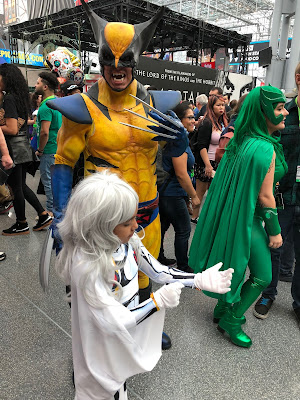 The signing wrapped up near the end of the show, and I ran around for a few minutes to get one last look at everything. Costumes were still plentiful here on the last day. 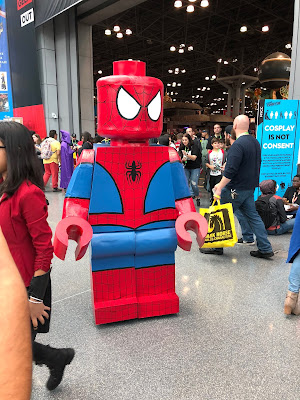 Does DC have the market on LEGO superhero movies? I'd think that a Spidey LEGO movie would do...pretty well. 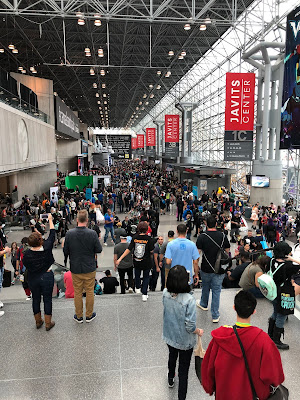 Crowds started to thin as the day drew to a close. But I still had one last stop to make. 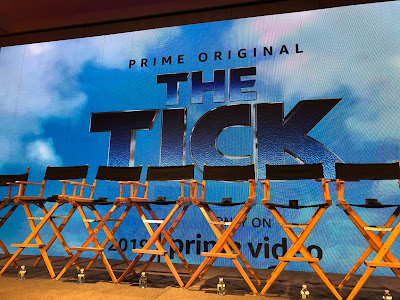 The 2018 Tick panel was a last minute addition to NYCC, for reasons that will be forever unknown to me. But right at the end of the day, room was found and the whole cast showed up. 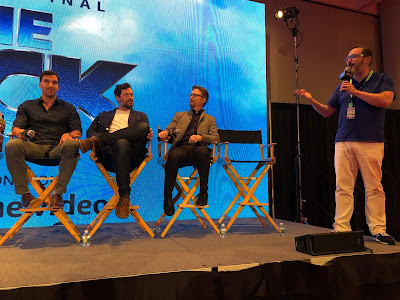 New-to-season-two cast member John Hodgman was the emcee for the panel. 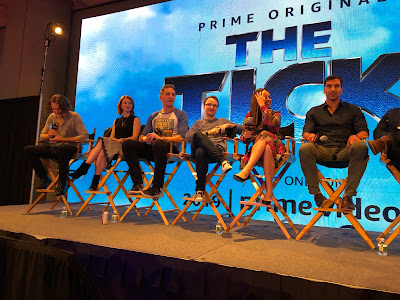 The room filled up pretty quickly as the panel began - I went to previous panel to make sure that I'd get a seat. Soon after I made it in, they closed the doors and wouldn't allow others to enter early, so in the few minutes leading up to the panel, the room was pretty sparsely populated, which was kind of worrisome. But then, all at once, the doors opened and everyone flooded in. The room was mostly full for the panel. 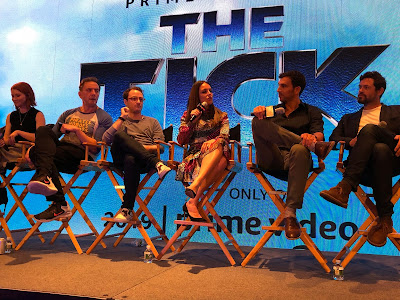 Since this was the last panel for the day - and the convention - it ran over quite a bit, to the point where workers were coming in and yelling at everyone to leave so they could tear down the stage. 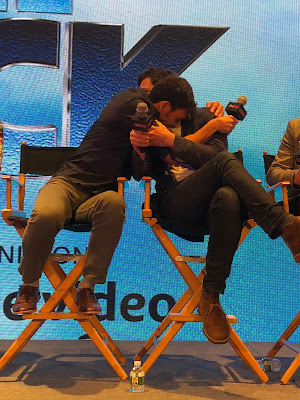 The cast of The Tick seems to genuinely like each other, and the fact that they all showed up at the last minute for this thing was a nice testament to that. Season two is on Amazon Prime now! 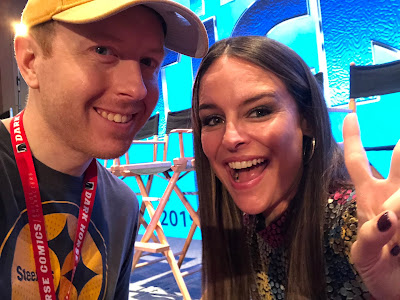 As the panel was breaking up and the workers were shooing everyone out, I got to say hello to a few of the cast members. Here I am with Miss Lint, Yara Martinez! 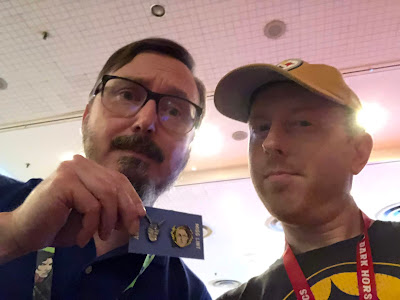 I, uh, gave John Hodgman some pins. And then we took a picture. 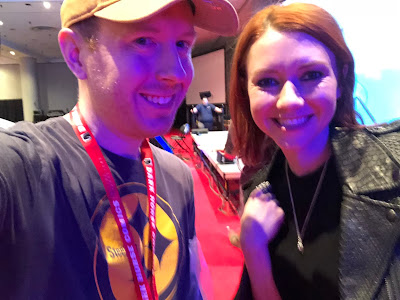 And then I saw Valorie Curry! What a great character Dot is on this show. In between the two of us, you can see one of the workers literally pulling the stage apart.

Everyone on stage took the time to sign autographs, take pictures, and talk to the fans who stuck around until the very end of the convention. It seemed to me that everyone in the room was happy to be there, even at the end of a long convention and given a non-ideal time slot for the day. Here's hoping that the cast can be together for several more seasons. 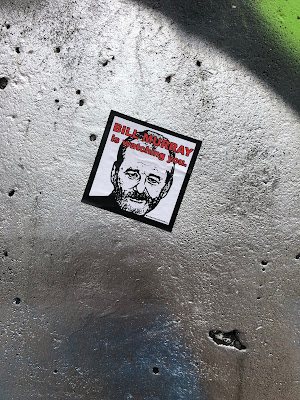 And that's it for my NYCC 2018 trip. It was off to New York Penn Station and back home. But let's look at some of the things I picked up while I was there! 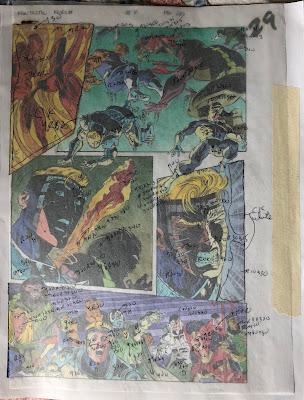 Earlier in the day, Ian Nichols took me to one of the booths selling original art, and I grabbed some color guides - specifically for the short-lived and much-maligned Fantastic Force series! When I saw a bunch of these all piled up, I knew what issue to look for: #7, one of the few that directly crossed over with the main Fantastic Four book. This page has the Thing in a couple panels, so it was a no brainer! 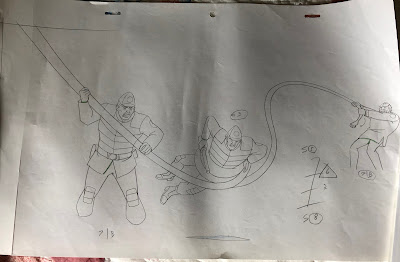 This is the Venture Bros. production art I got earlier at the panel. 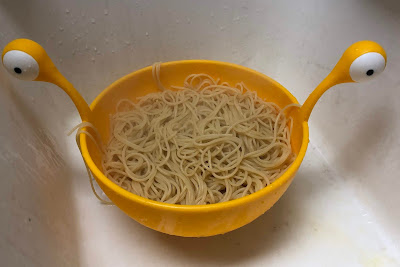 The best thing I bought, though, was this Flying Spaghetti Monster colander, seen here full of pasta.

I'm out of convention pictures! Time to go to another convention, I guess. Until then...!
Posted by Jeff at 3:13 AM No comments:

I had some time to kill a little while ago, so I stopped at a comic shop and flipped through some of their dollar comics. This rarely ends well, because I always end up meticulously poring through hundreds of books and buying a few dozen that I don't really need and struggle to find the time to read, but what can I say - collecting comics is an illness.

While searching through some boxes, I found (and eventually purchased) this: 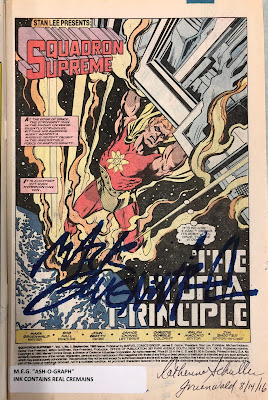 It's a copy of Marvel's Squadron Supreme #1 from 1985, signed by writer Mark Gruenwald. But upon closer inspection, we can see the sticker adhered to the book labeling it as an "ash-o-graph", and another signature from Catherine Gruenwald. So what's this about? 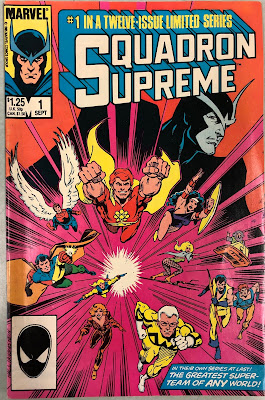 The Squadron Supreme is, of course, Marvel's alternate universe version of the Justice League of America, with pretty clear stand-ins for DC's popular characters like Superman (Hyperion), Batman (Nighthawk), Wonder Woman (Power Princess), the Flash (the Whizzer), Green Lantern (Doctor Spectrum) and more. After appearing in a few Avengers comics a decade earlier, the Squadron got their own 12-issue series in 1985 with Mark Gruenwald, Bob Hall and Paul Ryan at the helm.

When Gruenwald passed away in 1996, one of his final wishes was to have his ashes mixed in with a printing of the Squadron Supreme trade paperback. The issue I bought, however, was not part of the trade, and was remarked with the date 8/14/16, 20 years after he died. 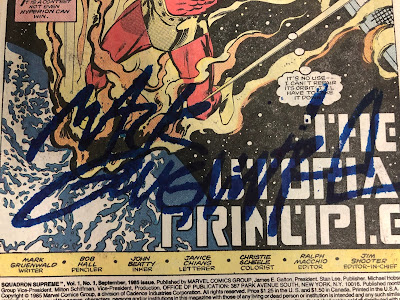 So this whole mystery is interesting and a bit morbid, I suppose. The sticker placed at the bottom of the page is labeled "M.E.G. 'ASH-O-GRAPH' INK CONTAINS REAL CREMAINS", indicating that the autograph is actually a stamp, and the ink in the stamp contains actual physical remains in it. 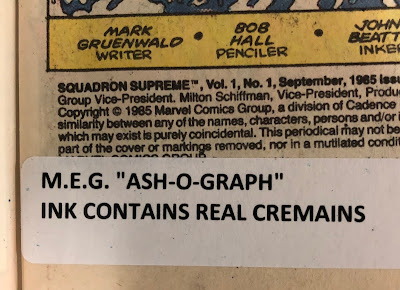 A Google search sheds more light on the situation, and I found this site which goes into a bit more detail about Mark, his wife Cat, and his ashes. On the 20th anniversary of his passing, Cat signed some of Mark's books using the new autograph stamp at a few different locations. 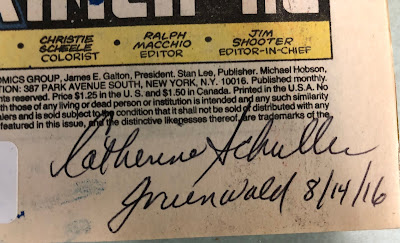 One stop on the ash-o-graph tour was a local New Dimension Comics store, which explains how a copy of this book wound up at another nearby store in the Pittsburgh area, and after paying a total of one dollar for it, it now resides in my collection, absolutely one of the most unique books that I own.
Posted by Jeff at 3:21 AM No comments: