It's a well-known comic book fact that most superheroes live either in New York City or in a fictional NYC placeholder like Metropolis or Gotham. But every once in a while, there are a few comics that break out of that mold and visit other real-life locations. Pittsburgh, I'd say, has been a bit underrepresented in comics in general, though there are exceptions. Firestorm is probably the most well known mainstream character to call the Steel City his home, and fellow Western PA creator DJ Coffman set his "Hero By Night" Platinum Comics series in Pittsburgh.

I recently picked up the two-part Avengers storyline that brought Iron Man and Wonder Man (and eventually the full Avengers lineup) to Pittsburgh, and I thought I'd give it a look here on the ol' blog. The storyline runs through Avengers 192 and 193. The A+ team of George Perez and Joe Sinnott drew the cover to issue 192, and it seems that Perez had read up on all of the latest Pittsburgh cliches for the non-superhero stuff: men in hardhats (with literal blue collars), smokestacks, industry. Checks all of the boxes. 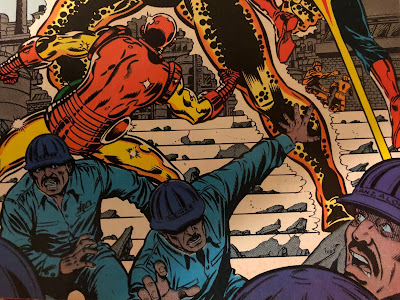 If you look closely at the guy in the middle, I think his hardhat says "Weiner". Cool. 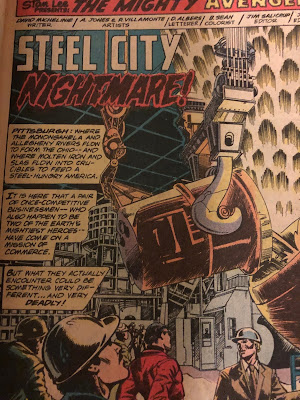 If you've ever seen a Monday Night Football Steelers broadcast, you've seen this shot. And you've heard them talk about the city's confluence of three rivers. So we're hitting the ground running, right from page one. This issue had a cover date of February, 1980, meaning it came out right a the end of the decade, and when this image still probably fit for Pittsburgh. Fun fact: they do still make steel in Pittsburgh forty years later, but it's actually not the only thing that happens, or has ever happened, in the city. 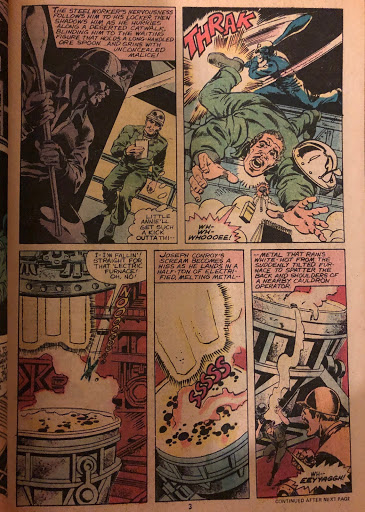 The plot of the story revolves around this: steelworker Joseph Conroy, who in Journey into Mystery #120 grabbed a sliver of Thor's broken hammer (gotta find that issue now, too), is thrown into a cauldron of molten steel. Simon Williams (Wonder Man) and Tony Stark (Iron Man) are in town, as Stark is considering purchasing the plant. 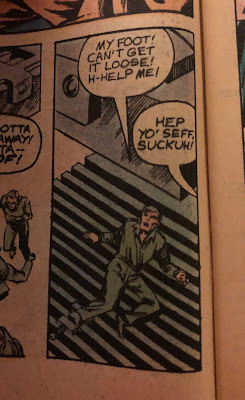 I have to believe that the second balloon was added at the last minute. 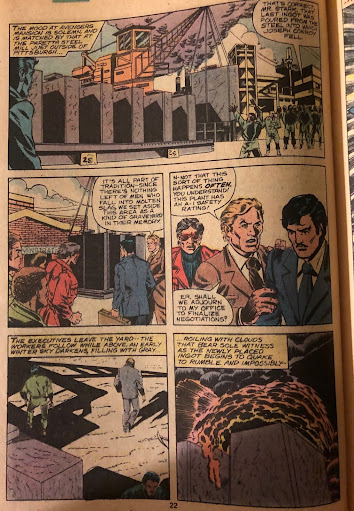 Conroy's co-workers give him a gruesome burial, and then get right back to work, and no one seems too bothered by the fact that someone just got incinerated right before their eyes. What can you do, I guess? 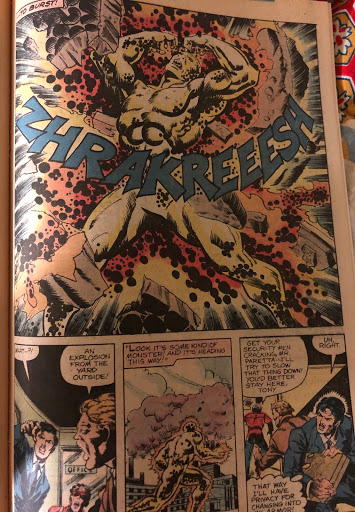 But then, as a result of holding onto the Mjolnir sliver, Conroy is transformed into the Pittsburgh Steeler! No, wait, I guess he chose another name. Okay. 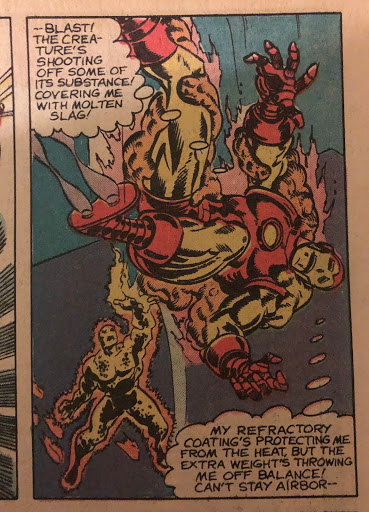 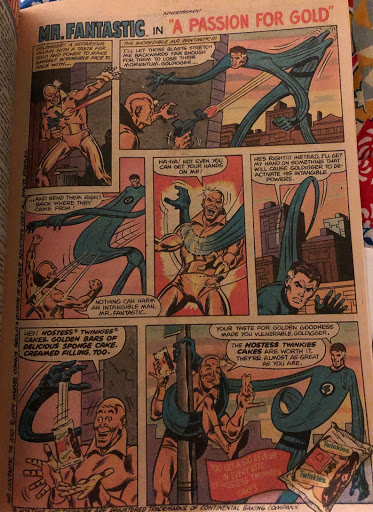 Oh! And there's a Mr. Fantastic ad for Hostess Fruit Pies! Wait, it's for Twinkies? No, I refuse to believe that Hostess made comics for any product other than their fruit pies. If I'm not mistaken, I'd say this ad has art from Sal Buscema. 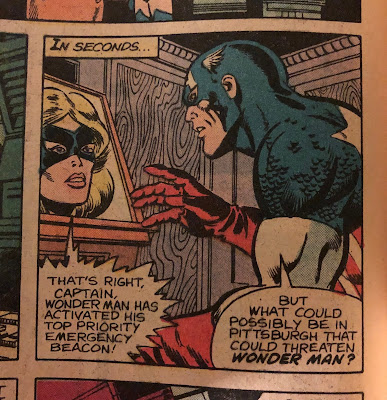 I feel like Captain America is being overly dismissive of Pittsburgh here. Has he seen the air quality ratings for the last 50 years? 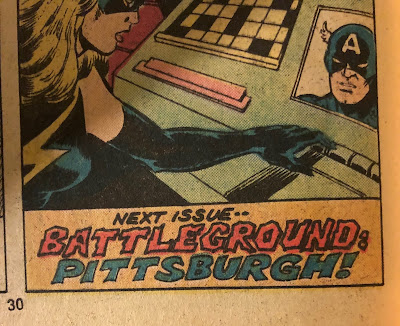 "Battleground: Pittsburgh!" is a great title. I like it.

Issue 192 was pretty light on any Pittsburgh-specific details. Yes, it takes place at a steel mill, and I guess a lot of folks (still) associate that with Pittsburgh, but this story really could have taken place anywhere. After reading this, my hopes weren't very high for the second chapter: 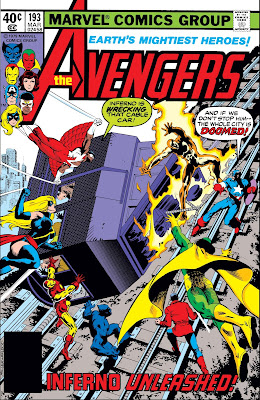 "Inferno Unleashed!" The other title was better. This issue has a cover by none other than Frank Miller and Bob McLeod! And is that supposed to be an incline car?? 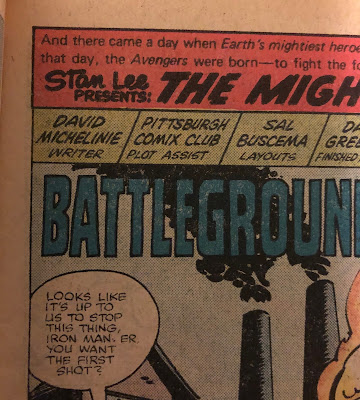 On the first page, one thing stood out to me: the plot credit for the Pittsburgh Comix Club. I've gotta believe that the writer or editorial team knew that they had to add a little more specific information in this issue, so they sought out a local fan club to help out.

The Pittsburgh Comix Club is an interesting group worth reading about; you can find more info on them here and here. 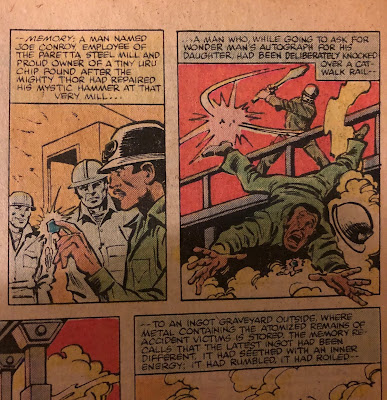 The issue opens up with a quick recap of the previous one. Joseph Conroy is now Joe, and the colorist seems to have gotten a note from editorial, as well. 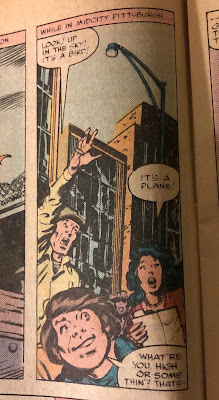 The Avengers come to Pittsburgh, and its citizens make, okay, a pretty good joke. 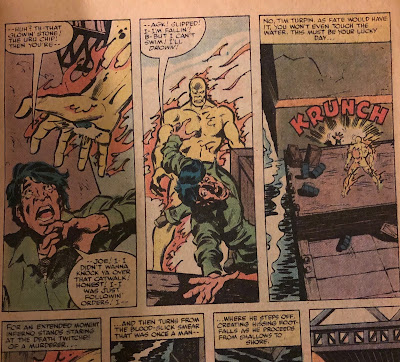 Everyone decides on "Inferno" for the misunderstood villain's name, as he hunts down those responsible for his untimely demise. One guy narrates his own death, as he is rather unceremoniously crushed by a barge. 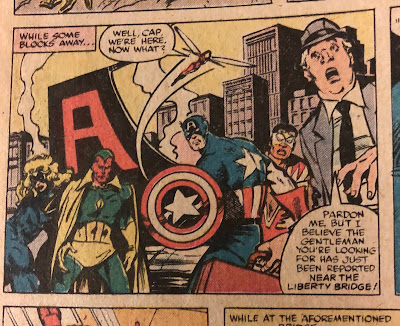 Oh, hey! And then the Pittsburgh references start to flow. The Pittsburgh Comix Club is coming through in the clutch, just like Bill Mazeroski in the 1960 World Series! Inferno is apparently near the Liberty Bridge, which is moving away from downtown, and is near Duquesne University, the Civic Arena (since torn down) and the Liberty Tunnels! 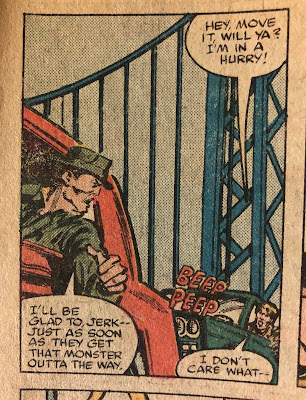 This would have been a good time to use "jagoff" instead of "jerk", but okay. You can't win 'em all. 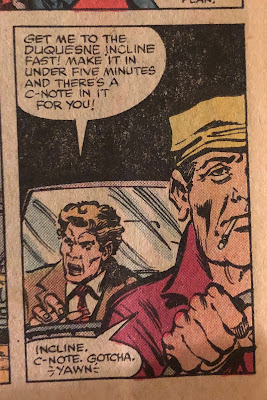 Pretty soon, there's another reference, this time to the famous Duquesne Incline! To make it from the Liberty Bridge to this particular incline station in five minutes would be possible, I guess, if there were no traffic. 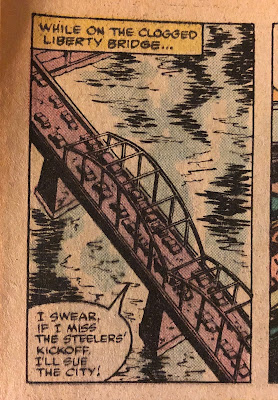 LADIES AND GENTLEMEN, WE HAVE A STEELERS REFERENCE 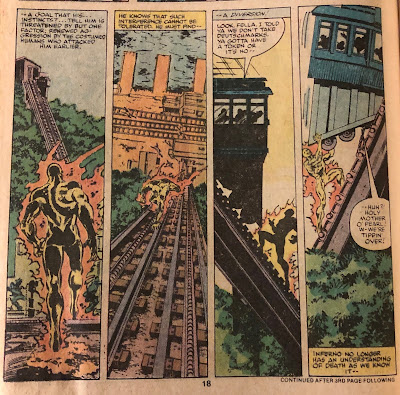 And here, on page 18, we can only assume that the artists found a Pittsburgh reference guide, because that is undeniably the Duquesne Incline station depicted. 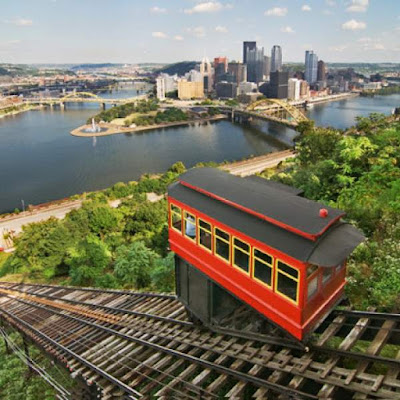 Yep - it checks out. 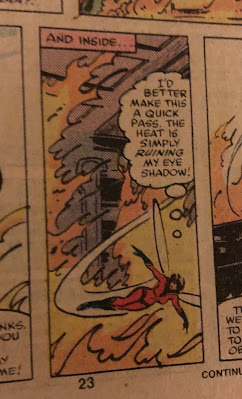 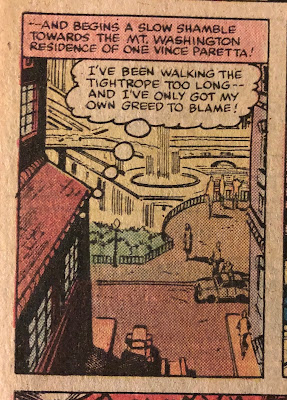 And wait...there's even a reference to Mt. Washington, at the top of the incline, and maybe even a shot of the fountain at Point State Park (even though this isn't the view you'd see from the observation trail)? Better yet, the story's real villain, the steel mill owner who, through a rather convoluted scheme, had Joe Conroy killed, lives on Mt. Washington, a wealthy part of the city. 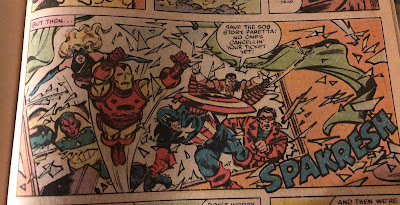 The Avengers apprehend him by breaking through the world's largest window! 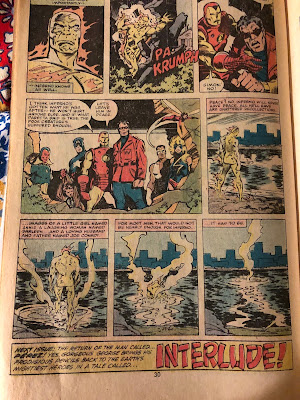 And then they let Inferno simply walk into the river, I guess never to return? The Avengers sure do like to have loose ends tied up, no matter how it has to happen! 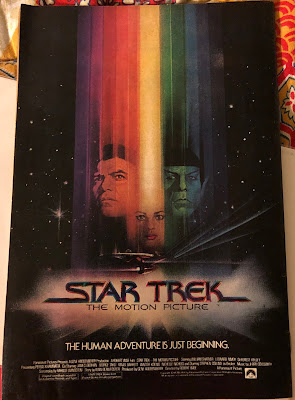 Oh, and there's an ad for Star Trek: The Motion Picture on the back cover!

So, this wasn't a great story overall, but it's obvious that the Pittsburgh Comix Club had a big hand in adding a lot of references to the second half, and that, at least, was enjoyable. Both of the issues felt quite a lot like filler to me, and the story ends with a mystically-powered force of nature walking off unchecked toward a populated city, but I guess we'll have to take what we can get with these issues. It was still fun to see Pittsburgh so prominently featured in two Bronze Age issues of the Avengers.

YOU WROTE A WHOLE BLOG POST ABOUT PITTSBURGH THEMED COMICS AND DIDN'T MENTION STEEL MAN!!!???!!!! YOU KNOW HE IS GOING TO READ THIS!!!!