Is this the greatest Thing costume of all time?

I walked the halls of the 2021 Rhode Island Comic Con and saw the rocky visage of Ben Grimm looking back at me.
The Thing is a tough costume to pull off. It's a big, bulky, full-body costume, with detailed, segmented rocks over most of the figure. I always appreciate it if an attempt is made, and I've seen a number of different tactics: lycra orange body suits with the rocks drawn on, a mask with a hat and trench coat doing most of the work, and exoskeleton-looking armor that clanks around when the person underneath moves. But this costume from this year's RICC is by far the best I've ever seen: 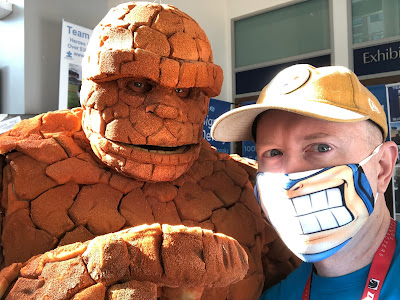 The level of detail, the individualized rocks and the round, somehow natural proportions set this amazing costume apart from any other I've ever seen. The time spent on details like skin tone, fingers and teeth make this a true work of art.

Needless to say, I was flabbergasted when I saw this guy at a relatively small show, looking his orange best and saying hello to all of the passers-by. Our eyes locked. I knew that this was someone I wanted to get to know. He was helping attract attention to a charity booth. I was able to get a picture and chat for a little while, but I didn't want to take up too much his time, so I followed up later when he was out of costume.Thing 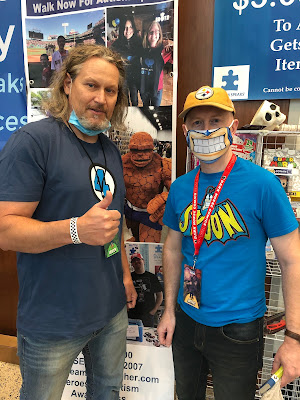 Here I am with Bob, the man behind the suit. As you might hope, Bob was a great guy who loves the Thing so much that he decided to make the costume. Bob doesn't have a team of helpers or any professional background - he just went to work with a fabric base and foam accents, using a few layers of spray paint for the rocks.

Bob mentioned that he was local to the area and hadn't traveled much with the suit, but that he had taken it to the New York Comic Con once, and this sparked a memory from a couple years ago. I think it was 2018 or '19 at NYCC: I was riding the train back to New Jersey with several other con-goers, one of whom was playing a video of that year's costume contest. I was eavesdropping watching the video as it played across the aisle, when I saw an absolutely amazing Thing costume on display. If I remember correctly, it was a second-place winner, which is a travesty of justice and very much a revoltin' development.

Bob was really friendly and just an overall nice guy. I asked him if he had any social media channels that I could follow, and he said no - which, if we're being honest, is probably what Ben Grimm would do, too. I was so excited to meet him and wanted to prove my own Thing bona fides, so brought along my Thing sketchbook to show him. If I ever see him again, I have to figure out a way to get him to do something in the sketchbook. Glue a piece of foam? Spray paint some orange rocks? I'm still figuring it out, but I do know that he's a guy who deserves a place in the book, and some wider recognition for his amazing skills with this, the best Thing costume I've ever seen.