In early November, I traveled to the Rhode Island Comic Con in Providence. The RICC was the last show I attended in 2019, so getting a table at this show in 2021 was an opportunity to start to feel like things were (maybe?) getting back to some semblance of normalcy. I sold some books and got some pictures, but I also grabbed some unusual original art from a comic strip I wasn't familiar with. Here's a scan!

I obviously have to learn to more seamlessly connect two halves of images in Photoshop, and I should probably try and flatten out that left edge, but what we have here is some art, dated December 31, 1962, from the comic strip "David Crane."

Not knowing anything about the strip, I was still drawn to this art for a few reasons, but mainly because the art is by Winslow Mortimer, a Silver Age comic artist who had notable contributions to a number of DC titles like Action Comics, Adventure Comics, Detective Comics and Superman Family.

The strip itself is mostly unremarkable from a story perspective. Despite Phil saying the word Larry twice, all that happens is one character showing another a car. The art is really lovely, though, and the car in the third panel (as well as Phil's sweater) has not just pencil and ink art, but also a sticker overlay that looks great despite being almost 60 years old. I tried to find what I could on the comic strip, and it seems that it ran from 1956 to '72. Created by Mortimer, I've found a couple mentions of the artist leaving the strip in 1960. This strip and its 1962 copyright information would seem to dispute that, though I suppose it's possible that Mortimer had a backlog, or that this strip was printed in the Toronto Star at a later date. I'd welcome any other suppositions, if any David Crane expert out there would like to set the record straight.

For most of its run, David Crane was a light action/adventure strip with religious overtones, following a young pastor and his flock. It seems that toward the very end, the strip abandoned this storyline and became a more generic gag comic. And I'll just add this extra bit and see if I can confuse anyone: David Crane served as the inspiration to the Cheers and Frazier characters later on. Maybe? Sure.

It's also worth noting that, based on the writing in the left margins, this strip was #666 in the set. I know it's just a number, but it's kind of funny that of all the pages out there, I picked up lucky 666 from a comic strip about a handsome pastor. 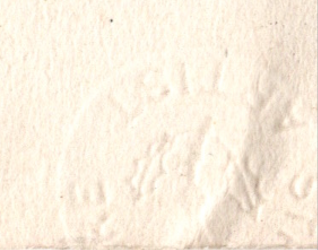 There's a light impression of a stamp in the very bottom right corner of the page that really intrigues me. The image looks like it has a leaf or plant in the center, surrounded by several words, one of which is "artist." What this means, if it was just on the paper or specific to the comic strip, is something I'll probably never find out. But it's something I didn't notice until I took the scan of the full image.

I really like the look and presentation of comic strip art, and I've gotten a few recently. I think this is the oldest piece of original art that I now own. It's obscure as far as properties go, but I really enjoy having it.

You should do the CSI trick where you put a piece of paper over the impression and draw lines over it with a pencil to see what it said. That would be fun. Also Larry. And 666!