Let's talk for a moment about how weird the 1980s solo Thing series got before it ended. The series started out as you might expect, chronicling the exploits of Ben Grimm directly following the end of the Marvel Two-in-One series. It served as a companion series of sorts to the main Fantastic Four title for most of its first year and, for the most part, told traditional superhero tales in familiar FF surroundings. But as 1984 and the event series Secret Wars came to be, the title changed in location and in tone relatively dramatically.
At the end of the Secret Wars series, the Thing makes the decision to stay on the Battleworld planet created by the Beyonder, ostensibly to explore this new planet. For about a year, the Thing series attempted to explore the psyche of Ben Grimm instead, though, taking on many qualities of a fantasy adventure comic. The Thing fought classic literary monsters like Dracula and Frankenstein, and he found that he could change to his human form (mostly) at will.
During this time, the Thing met and fell in love with Tarianna, a redheaded warrior who co-starred in the book for a while. As the stories got stranger and stranger, it was finally revealed that Ben Grimm's traumatized psyche was transforming the planet and everyone on it - and that he was creating all of the people who populated the world. There were monstrous versions of the Thing, a mysterious "Grimm the Sorcerer," a moloid-like band of Takers, and the aforementioned Tarianna, whom Ben created to be his ideal partner. He later learned that she was based on his memories of Sharon Ventura, later Ms. Marvel.
This sci-fi/fantasy approach to the Thing, once it came to an end after Grimm returned to New York and, eventually, the Fantastic Four, has rarely be revisited or even mentioned, despite, or perhaps because, its wild departure from what readers were familiar with. Plainly said, it was a really weird time for the Thing, as a character and a series.
I was recently able to purchase a page of original art from this strange period for our hero. Here is it below! 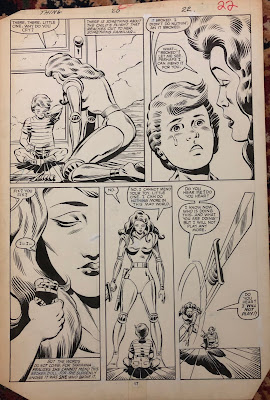 At first glance, this might not look like a page from The Thing, but as we just learned, looks can be deceiving. This page features artwork from Thing stalwart Ron Wilson, with inks from Mike Gustovich and letters by John Morelli. 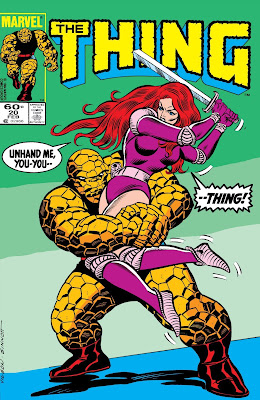 Here's the cover from this issue, #20, with the Thing's red/black outfit that came with the boots I dislike so much. The cover date on this was February of 1985. 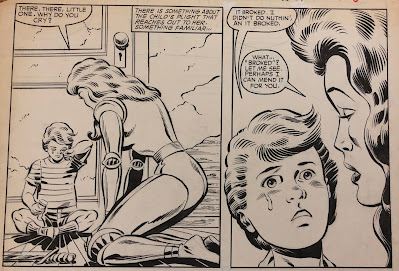 Tarianna is featured heavily on this page. In the story, she's been captured by Grimm the Sorcerer and, in her mind, is journeying through Ben Grimm's distorted past. Here she meets a young Grimm who has broken a familiar-looking toy. 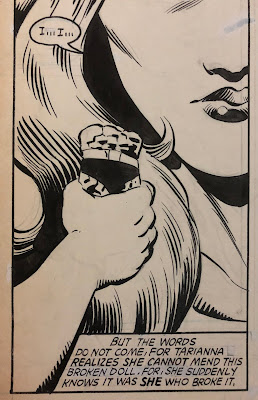 The toy's bottom half is the only appearance of the Thing in his rocky, heroic form on this page, and it's a rather obvious attempt at some psychological symbolism, as Grimm's emotional trauma and desire to heal is on display. The final panel on this page directly precedes Tarianna's triumphant escape from the sorcerer's trap.
All in all, this might seem like an pretty unremarkable page, especially in the context of what we usually know the Thing for, but I am excited to own it, if for nothing else than to grab a page from what is undeniably the strangest period of the Thing's long history. 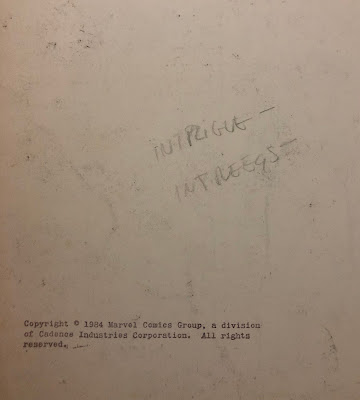 Here's a quick peek at the back of the page, with the requisite copyright information. It also looks like someone was trying to figure out how to properly spell the word "intrigue"...or maying "intriguing"? Anyway, that word doesn't appear anywhere on this particular page, so we'll just have to leave this...intriguing detail for some other time.
Posted by Jeff at 6:42 PM