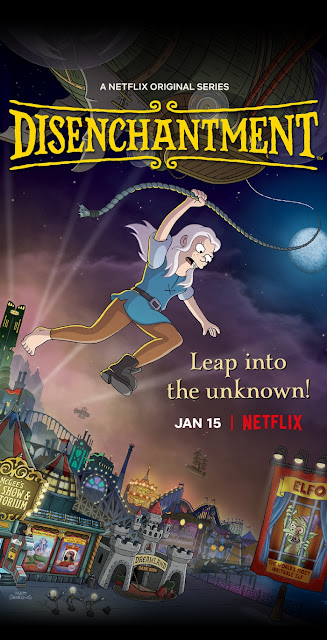 We're all watching the newest season of Disenchantment on Netflix, right? I love this series and I think that the newly-released season three is really compelling, funny and exciting. For all of the obvious reasons, this show feels like an extension of Futurama, which is one of my all-time favorite programs.
For reasons unknown to me, a marketing company contacted me a few weeks back about sending me a press kit-like "watch party" box in anticipation of the new season. I, of course, hastily accepted, and just a few days ago, a package arrived with a box of Disenchantment-branded items. I thought I'd show them off, with many thanks to ChizComm Media and the folks at the show! 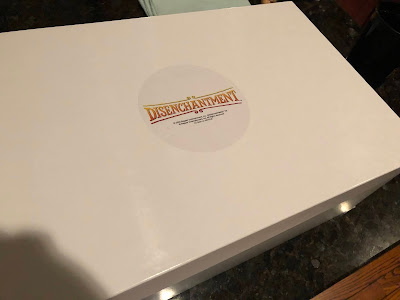 Any collector knows that the box is a big part of any presentation. This one was simple but I really love the logo sticker on the lid. This is why I will be keeping the box forever. 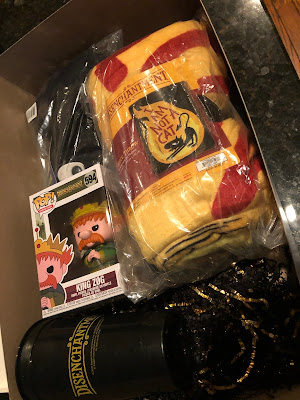 The stuff inside the box was also pretty exciting. Here's how it looked, packed with black and gold confetti. 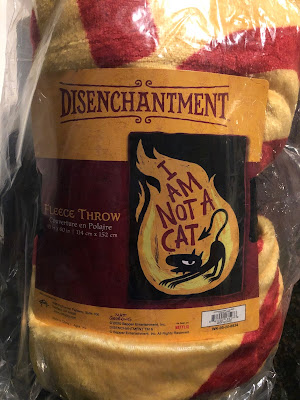 First up! Here's a fleece throw featuring the demon Luci. 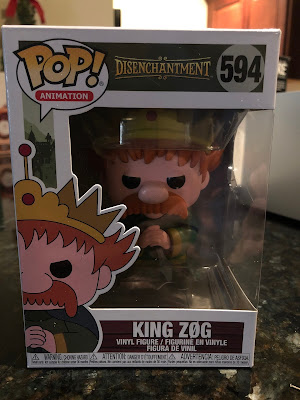 Next, here's a Funko Pop! figure of King Zøg, voiced by John DiMaggio, Futurama's Bender. Zøg goes through some really harrowing stuff this season, and DiMaggio does an absolutely incredible job with his voice, as he wrings every last drop of emotion from this character. He's also the voice of the talking horse! 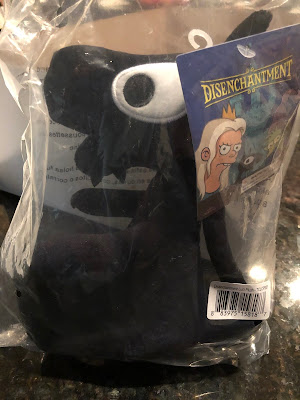 Next up is a Luci plush figure. These were on sale at Comic-Con in 2019, and it's the only Disenchantment merchandise I didn't buy at the time. Since then, they've jumped quite a bit in value and have been hard to find in general, so getting one here, for free, was a huge treat. 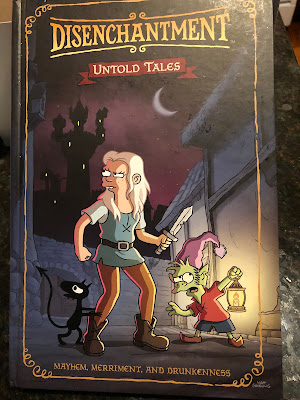 Next is also an item I saw - and bought - at Comic-Con 2019. It's the Disenchantment "Untold Tales" book. This oversized book is part comic, part activity magazine, and was the last thing put together by the old Bongo Comics team before they unfortunately shut down the imprint. Now I've got a second copy! I'll give it to one of my nephews when they're a little older. 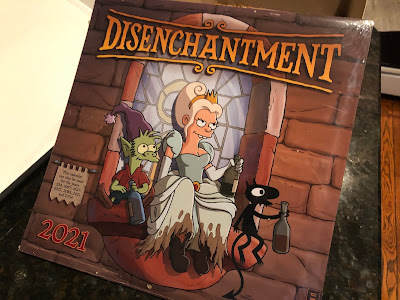 Also in the box was a Disenchantment 2021 calendar! 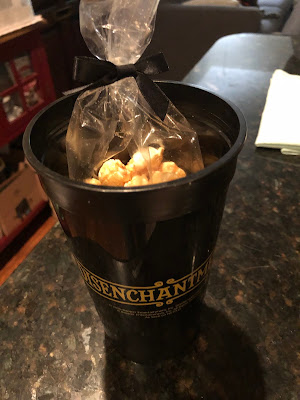 Lastly, there's a cup - and this might be the only item that isn't available elsewhere. But look! There's something inside the cup: 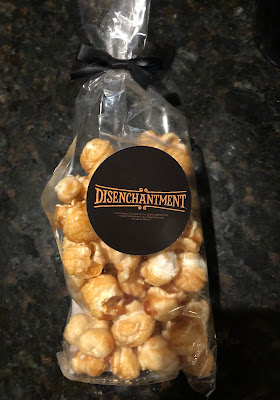 It's a bag of carmel corn, with a Disenchantment sticker on the front. I'm kind of grateful that there was a small tear in the bag, because it means that I'll have to actually eat it, rather than agonizing about whether I should try and save a bag of popcorn for the rest of my life. I, uh, will keep the bag, but at least one decision was taken out of my hands.
I also...made a video of me taking these things out of the box, and I put it on Twitter! You can watch it here, if you'd like, I guess:

The fine folks at @Disenchantment HQ sent me a box of stuff in anticipation of tonight’s season 3 premiere on @Netflix! For your enjoyment, I unbox it before your very eyes: pic.twitter.com/sm74VoOPDd

I'm not entirely sure why the folks at the show decided to send me this box, but I'm extremely grateful for it. I would no doubt be watching this show in any case, but I guess it gets me to try and spread the word a little more than I otherwise would have. If you're not watching this show - and especially if you like Futurama - then you absolutely need to! Check it out on Netflix!
Posted by Jeff at 12:30 AM

Can you take some close up of the calendar pages?