Is this the worst piece of Thing merchandise ever created?

Let me preface this post by saying that any Thing merchandise is good Thing merchandise, because, after all, it is the Thing that is being...merchandised. Let me also say that I have a number of truly horrible Thing bootleg action figures, many from our neighbors in Mexico, that I love unreservedly.
But there's one piece of officially licensed Fantastic Four merchandise that I've long held to be the worst, most horrendous of all, and this year for Christmas, my friend (and yours) Larry got it for me. Ladies and gentlemen, I give you, the Fantastic Four Thing lamp: 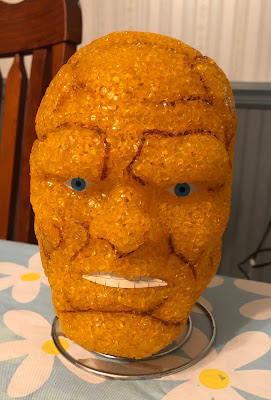 Now, with one look at this almost obscene item, you might be questioning whether this is actually an officially licensed product, rather than an Etsy project gone terribly wrong. I'm here to tell you that no, this travesty has the official Marvel stamp on it. It is real and it is terrible. 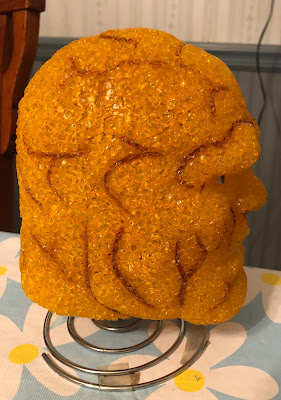 This product came about, as many Fantastic Four items do, in 2005, the year of the first Fox-produced FF movie. The movie itself was okay at best, and that describes many of the scores of products that came out in conjunction. 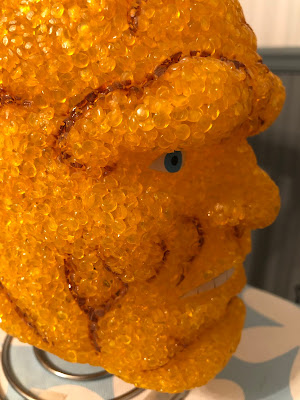 I've seen this lamp referred to as a "popcorn" lamp because of the plastic bead material that comprises the head sculpt. The head itself is quite pliable and rubbery. 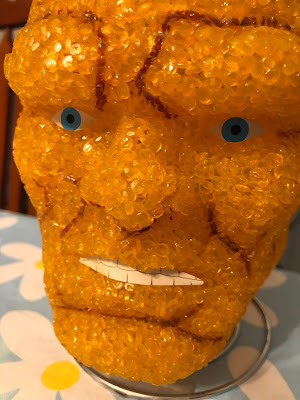 Here's another closer shot with more detail. It reminds me a little bit of the bead art you could make yourself with the unbelievably dangerous use of a clothes iron. Do they still sell those?

In this shot, you can also see the cheap, lifeless stickers used for Mr. Grimm's eyes and mouth. At least they got his blue eyes right, but sheesh, those are both really bad. 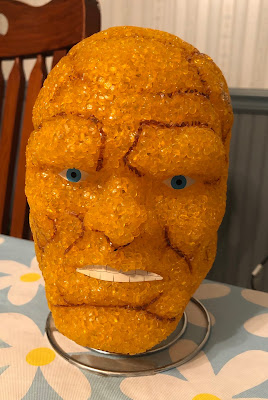 The darker brown highlights seem almost haphazard in their placement, although they did manage to highlight the brows, an important component to the Thing.
I mentioned that this product is a decorative lamp that is balanced on a wire stand. It's been over 15 years since it came out - does it still work? 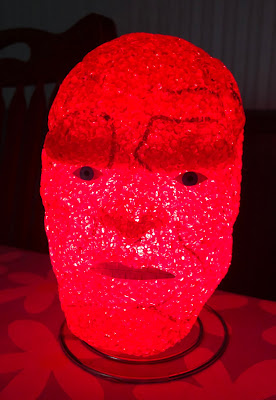 Yes! Somehow, this makes it look even worse. 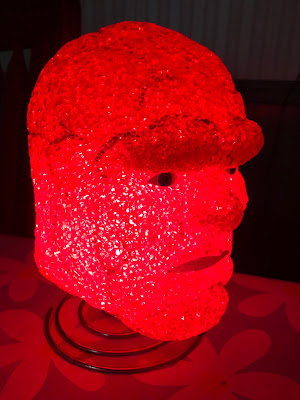 It's hard to believe that this item got the thumbs up from Marvel on its way down the production line. Even though I'm spending this post discussing how truly awful this item is, I want to thank Larry for getting it for me. I remember seeing it in stores in 2005 and deciding, "well, I guess I don't have to get everything Thing-related that comes out," but I've honestly thought about it ever since and have wondered if I made a mistake by not buying this monstrosity. Now I don't have to wonder if I missed out.
There's one more of these lamps up for sale on eBay right now, and I took some screenshots so we could look at the packaging, which manages to make it look even more terrifying: 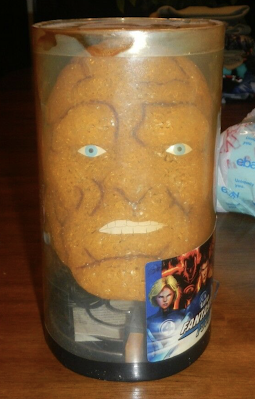 It looks like a head in a jar, complete with a pained expression and a wide-eyed stare. 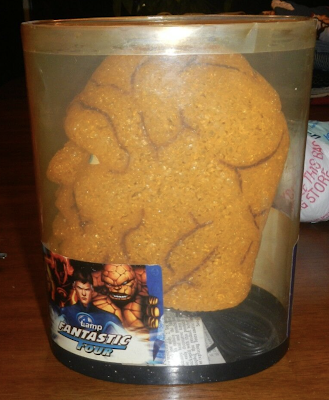 In this shot, you can see the official sticker on the side, complete with imagery from the Ultimate Fantastic Four series. 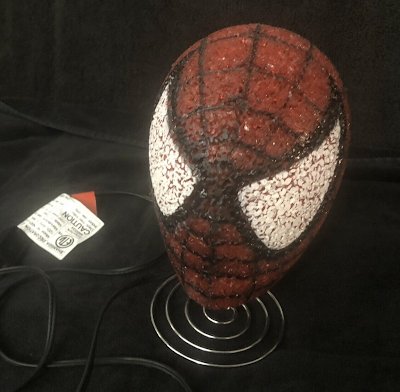 There were other Marvel lamps in this line, all of which were also bad, but none as bad as the Thing. Here's the Spider-Man lamp: it's still terrible, but the shape of Spidey's head makes it at least a little bit more palatable. 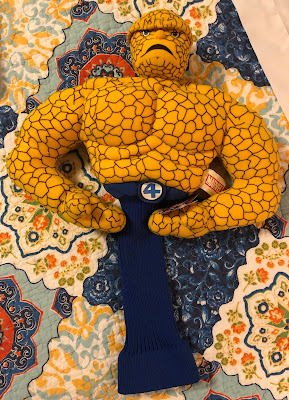 Not to be outdone, Larry got me several other terrible Thing items. These are all products I've been following on eBay for probably at least ten years, but could never bring myself to buy because of their obvious lack of quality. This one is a golf club cover. Has anyone...ever used this? 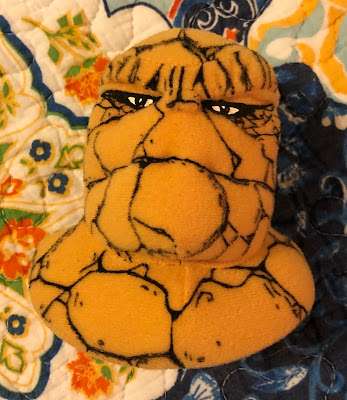 This small plush toy really caught me off guard, because I've seen - and hated seeing - it on eBay for years and years. It used to be listed with the phrase "Thing bust," one of the phrases I'd use when searching for Thing statues. This is clearly not a statue, though I suppose "bust" does technically apply. Still, I absolutely hated seeing it come up in search results. It almost seemed like it was taunting me from the screen. Well, it appears that I truly am cursed, because now it lives in my house and has infiltrated my collection quite expertly. If I had to guess, this might be a toy you would have found in a claw machine game.
When you've got a big collection of anything, sometimes you've got to scrape the bottom of the barrel to get an item that you didn't previously have. I think it's safe to say that at the very bottom, you'll find the Thing lamp.
Posted by Jeff at 5:29 PM

There is one item in my Dukes collection that I refuse to acknowledge that you bought me. Now we are even.