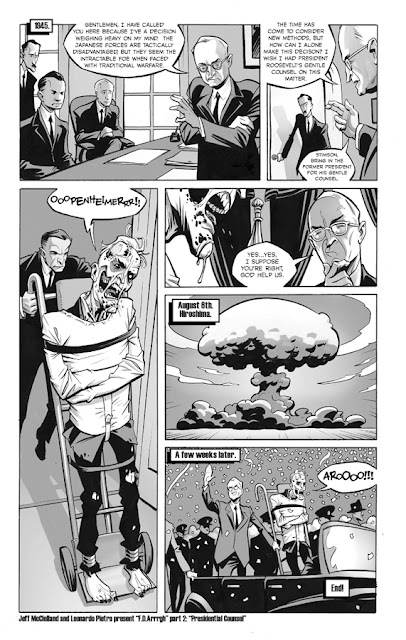 The second volume of FUBAR, a preview edition of which appeared at the Baltimore Comic-Con, is all set to show up in the October edition of Previews for a December release.  FUBAR head honcho Jeff McComsey has put online the final page of the volume for all to see, so I thought I'd post it here as well.

This single page is the second installment of the "FDArrrgh" continuing story, with art by the great Leonardo Pietro.  I had a great time revisiting this mini world that was at one point just a one-off joke in "Yalta!" (you can read that here).  The third installment is on the way, too...but for now I hope you enjoy this bastardization of a an incredibly weighty historic decision.  Here's a little easter egg for this strip: the background characters are all members of Harry Truman's cabinet at the time: Secretary of State James Byrnes, Secretary of War Henry Stimson and Secretary of the Navy James Forrestal.