I was back at the New York Comic Con on Friday of the show. Let's look at some pictures! 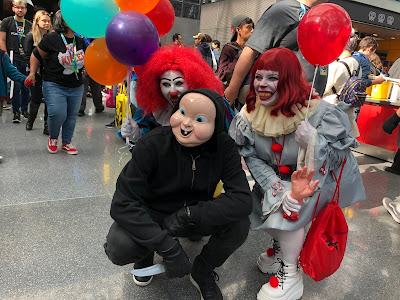 "It" costumes have been really popular this year, which isn't a surprise. I think the other character is from the Death Day movies? Are those still a thing? Okay. 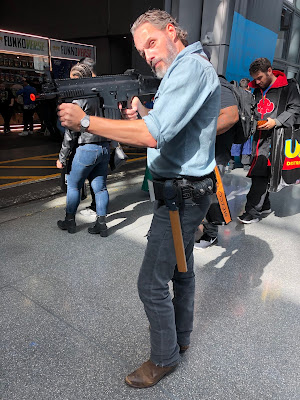 This guy has to be a stand-in for Andrew Lincoln on the Walking Dead, right? I mean, I was about 10 feet away from the guy, and there was still a part of me thinking, "i-is that really him?" He's got everything down pat. Good on him for going with it. 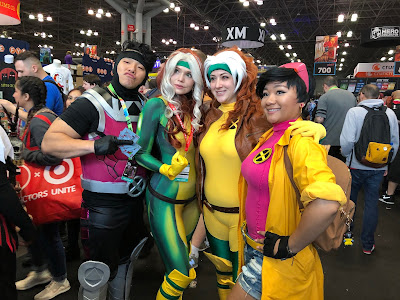 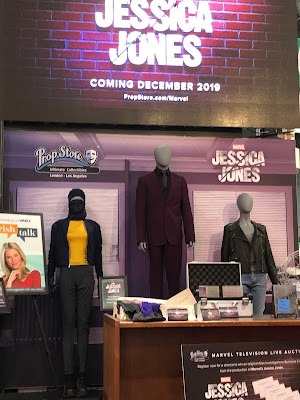 One of the displays at the Marvel booth was props from the Jessica Jones Netflix show. Not because they are promoting a new season, but because...they're selling the costumes and other items from the series. You, too, can own a Purple Man suit! 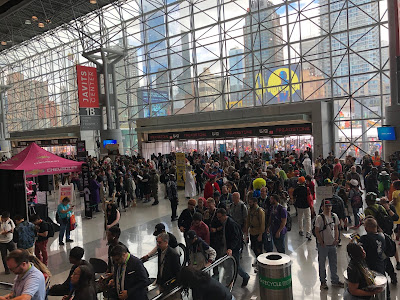 Friday seemed a little less crowded than Thursday, surprisingly. Maybe it was because the weather was nicer and people were spending some time outside. 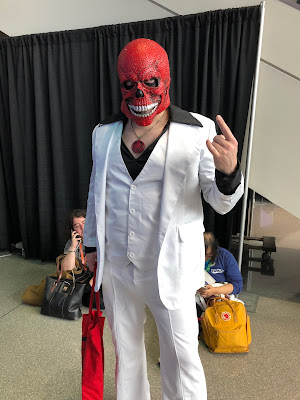 I don't know if this mashup is a reference to anything specific (The Godfather? Something '70s), but the Red Skull bejeweled mask was impressive. 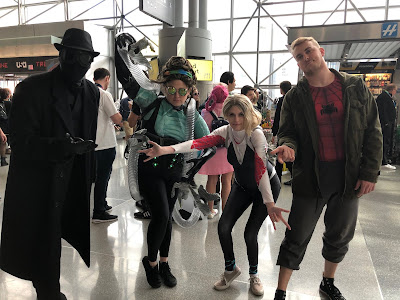 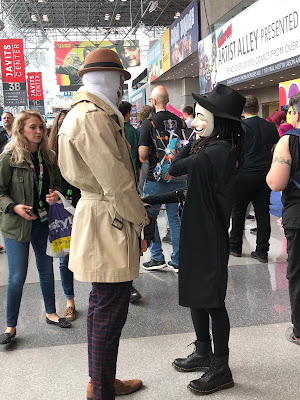 One of them probably had a question. 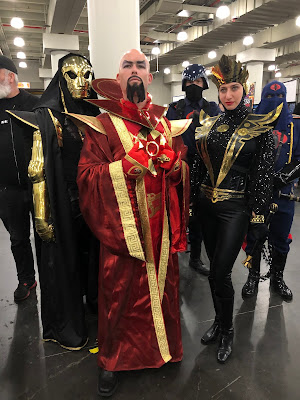 As seen in artist alley... 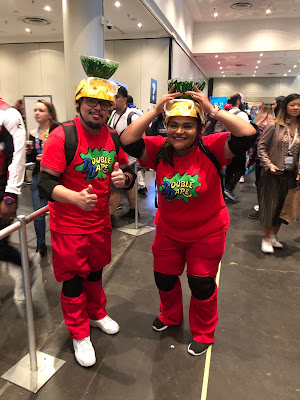 Midway through the day, I made my way downstairs to see the panel area. Along the way I saw some Double Dare contestants... 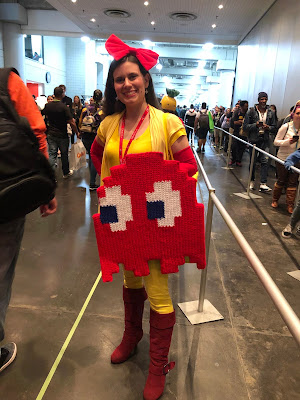 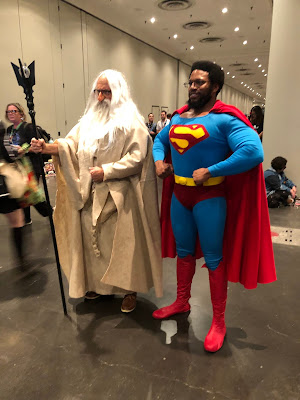 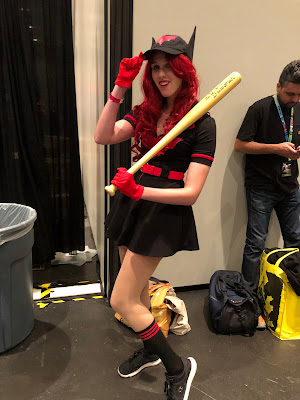 ...and the DC Bombshells-version of Batwoman. Oh, wait, she's got a baseball bat. I get it. 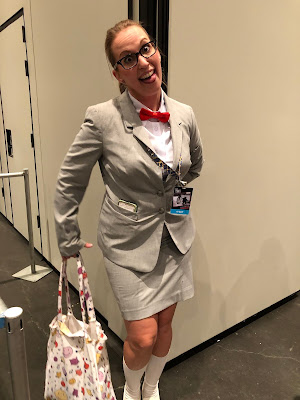 NYCC has relatively limited programming, and there's not a lot that I feel like I HAVE to catch, but the one that stood out to me while I was there was the Paul Reubens panel. I naturally grew up with Pee Wee's Playhouse, but I wouldn't say that I'm anything more than a casual fan of Reubens (unlike this individual who dressed up in an amazing Pee Wee costume!). Still, I saw the listing and I said, "I have to make it to this panel." 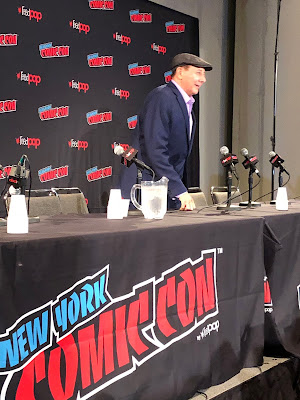 I arrived about 45 minutes early and ended up in the front row in what became a packed room. The panel was different than what I expected - there were very few jokes and there wasn't really a theme or stated purpose to the panel. It was just Paul Reubens telling stories about his career and some of the people he knows. 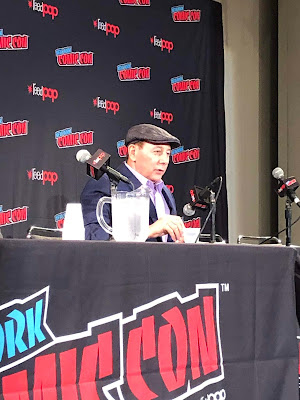 And even though it wasn't anything like a performance, I still enjoyed the heck out of it. Reubens told a lot of really interesting stories and came off as a very personable guy. And, okay, there was some Pee Wee that snuck through - a press photographer took a few pictures as the panel began, and Reubens looked at him and said, "take a picture, it'll last longer!" And the crowd went wild. 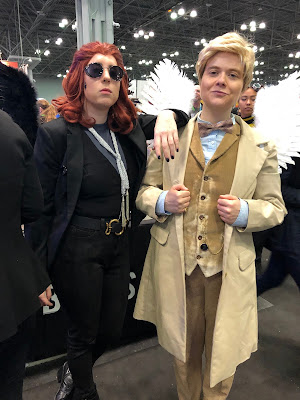 And then it was back to the convention floor to wrap up the show for the day. Here's a good duo costume from Good Omens. 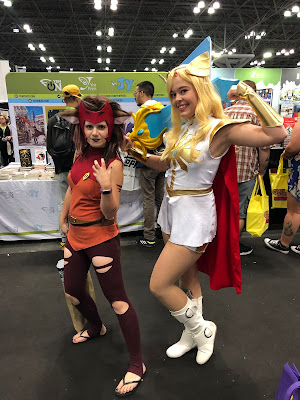 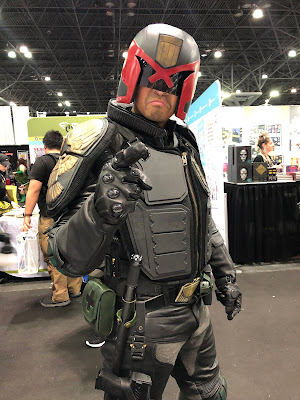 This guy's got the scowl down. 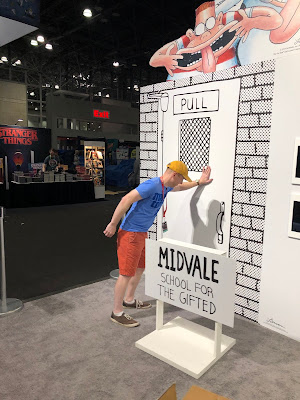 The show ended and I helped put a few things away at the New England Comics booth, which was pretty close to this Far Side display (is this comic coming back?? I desperately hope so). So I snuck an after-hours picture. 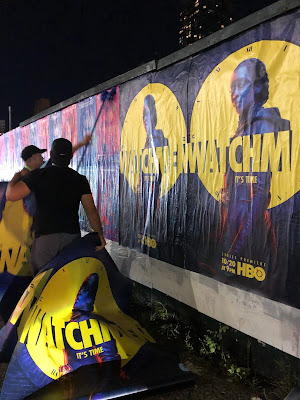 HBO was promoting the new Watchmen series at the show with a big billboard in front of the convention center, and with these posters that were being hung as I walked by. Could I have grabbed one from the ground and ran? I thought about it. 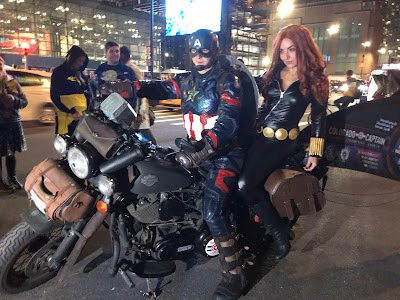 I'm sure that motorcycles aren't allowed in the convention center. Do you think this Captain America/Black Widow duo were outside all day, waiting for the opportunity to have people take pictures of them? I guess it's possible. 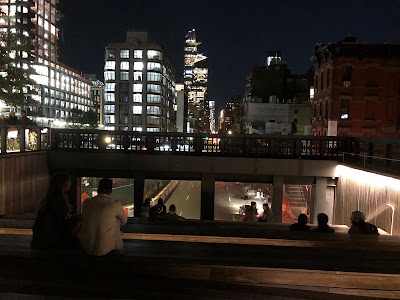 I ended the evening by walking the High Line, the above-ground park that's just a few blocks from the Javits Center. It's my second time there and I really like it.

One more day! More pictures to come.
Posted by Jeff at 6:30 PM