After the last day of Comic-Con in July, I had a cookout with some friends at the house I rented for the week. It's a Comic-Con tradition, and honestly one of the things I look forward to most about the show. One friend brought over her Nintendo Switch, and in between rounds of Mario Kart, my pal Ian Nichols handed me this great page of original artwork from the 1980s Thing series. 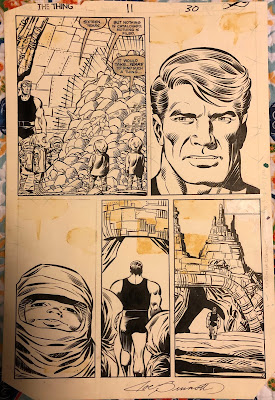 This page features the one-and-only Benjamin J. Grimm in his human form. It's the final page of issue 11 - page 22 or 30, depending on if you count the ads - as Ben walks off into the distance. 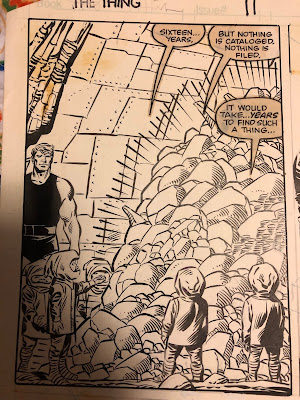 Over the years, most of the word balloons and captions have been lost, and only remnants of the yellowed glue remain. The first panel is the only one that still has any words on it, including the seemingly prophetic, "It would take...years to find such a thing..." 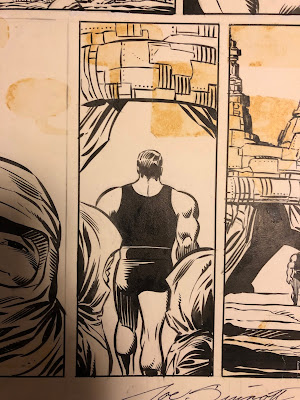 This issue comes directly after the events in the Secret Wars series, where the Thing decides to remain on Battleworld. The series got pretty weird for a while, with the Thing (often as Ben Grimm) fighting a number of imaginary monsters, including Frankenstein. 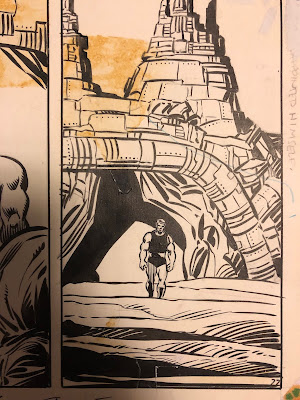 The art on this issue comes from Ron Wilson and Joe Sinnott, both longtime Thing artists. John Byrne wrote the script.

At the top of the page, we can see the official Thing title stamp, finished off in permanent marker, it seems.

And at the bottom, we find a signature from "Joltin'" Joe Sinnott himself, which adds a lot to this page, I think. 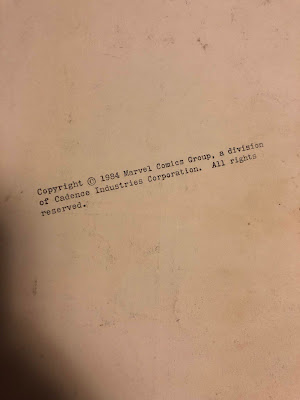 On the back of the page, we have some legalese from 1984. 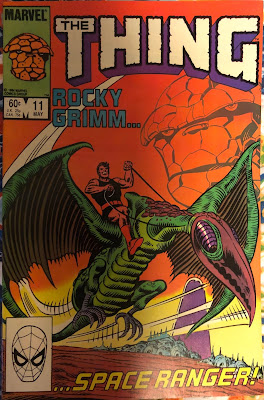 Here's the issue in question, giving the Thing a new nickname - Rocky Grimm - and setting him up on some very strange adventures. 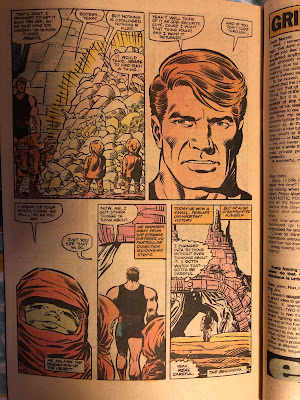 And here's the final story page as it was printed. It allows us to fill in the missing dialogue from the page, which has Ben basically threatening his new minions in order to get them to search through their endless piles of pilfered goods, even if it'll take 'em years to do so. That'll show 'em!

I'm pretty excited to add this page to my collection. Thanks to Ian for an unexpected surprise! As always, it remains clobberin' time!
Posted by Jeff at 12:06 AM