The new Yeti store on Etsy! And other blog updates! 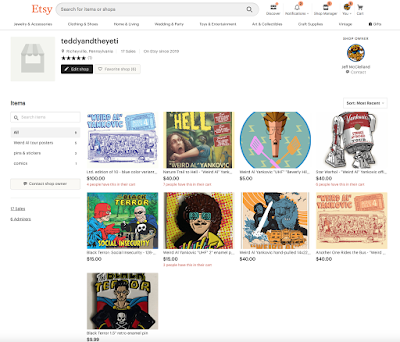 I, uh, don't know why it took me years to do this, but I finally opened up an online store on Etsy! I suppose that I never felt that I had enough products to really merit managing one, but whatever the reason, I've got a new store that you can find at etsy.com/shop/teddyandtheyeti.

Naturally, what precipitated this was the "Weird Al" Yankovic Strings Attached tour. I worked on three official tour posters and, since they've been announced and released, people have been contacting me about buying them. Now they can buy them! And some people HAVE bought them! Look at that.

Along with the tour posters, I also have...well, some other Weird Al stuff that I've made over the past few years. I'm still considering what I should add with regards to comic books and the like, but for now, I at least have copies of the recently released Black Terror: Social Insecurity on hand as well as some enamel pins that went along with the campaign. The graphic novel is hefty enough to hopefully make it worth buying and paying for shipping (plus, perhaps you will like reading it). The shop is open! Hooray!

I've also updated this ol' blog slightly in recent days. Right under the header sits a few links - a few more than there used to be, as it turns out.

A while ago, I created a Tumblr account (just in time for people to stop using that platform), and I have posted some of my shorter comics there. I used to house some of them on one of the internal blog pages, but it just wasn't easy to read. So the Tumblr page has some of my comics stored and ready to view! Here's the direct link: teddyandtheyeti.tumblr.com 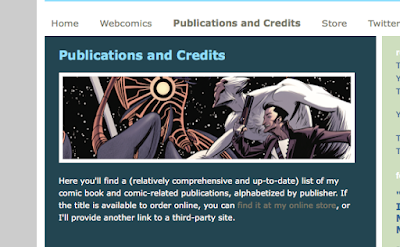 There's also a new link that takes you to one of the aforementioned internal pages, titled "publications and credits". I created this page not just so that I can remember what stuff I have worked on. Every year, the New York Comic Con professional badge application has a line that asks you what you've worked on before, as well as for a professional website. And I never feel like I'm putting my best foot forward in that (very) limited space. There's just not enough room to make a case for yourself if you're like me, someone who legitimately works in the comic industry, but doesn't have a lot of name recognition. So I made this page to list a lot of the things I've worked on to hopefully make a better case for myself in the future. I almost always end up getting a professional badge before the show, but it's not always an easy process.

So, hey, you can look at a semi-comprehensive publication list for myself if the mood ever strikes you late at night.

Oh, and there's also a Twitter link! You can click on that and see my Twitter page. I guess. If you want to. I talk about the Steelers a lot on there.

There's more for me to do to clean up this site a little more. The gigantic word cloud on the right of this page amuses me, so it can stay, even though it's a help to almost certainly no one. But a number of the other links and widgets are a bit outdated, and they need to be either updated or dumped. There are only a certain number of hours in the day, though (it's a mystery as to exactly how many, unfortunately), so those will take a little longer. Sometimes I think that I should just choose a new layout entirely for this site. But I fear change! So it stays for now.

Thanks for reading this, I guess! Back to Comic-Con pictures.

A healthy fear of change is a good thing. Not harmful at all.