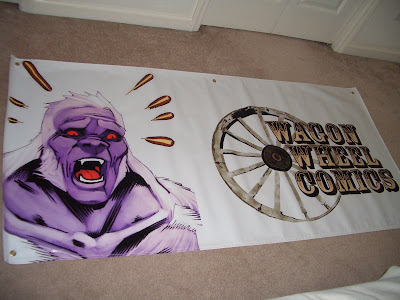 Oh, the Hulk.  What strange catch phrases he has had over the years.  In this case, though, I will stand up to the Hulk and say that he is dead wrong - first of all, the Thing could totally beat him up, and secondly, the banner you see above is absolutely great.

I had this vinyl banner printed out at Staples (after much hair pulling and the realization that I apparently know more about computers than the computer people who work there...as a job) for the upcoming convention season.  I picked it up on Monday, which was of course cutting it close as the Pittsburgh Comicon is on Friday.  I suppose that all's well that ends well, or some other catchy cliche, because it came back without a hitch.

The banner is three feet from top to bottom and almost six feet wide and features an image of the Yeti taken from a panel in the book's first issue.  It's one of my favorite images, as I also use it atop the letters page in the book and, if I had it at the time, it probably would have been used for this blog as well, though the "I love shrimp" masthead that you see on this page works pretty well, all things considered.

Now the question naturally becomes "what are you going to do with this once convention season is over?"  Well...I don't know.  Perhaps I'll put it up in my garage (note to self: build a garage) and, when I am old and disillusioned, hide away from the world, looking up at it longingly and thinking about what could have been.  Or perhaps I'll be a millionaire and it'll hang in the Smithsonian, who knows.  It does look pretty cool, though.
Posted by Jeff at 11:56 PM