Why does everything old have to be new again? 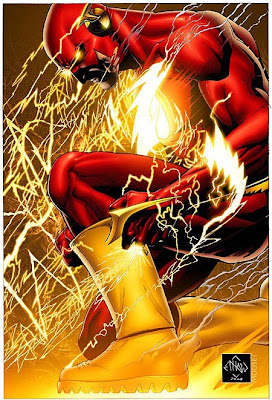 I realize that nostalgia plays a big part in comic book readers' reading habits.  Someone grows up reading about certain characters, that person falls in love with them, and he or she expects them to be around for life.  We grow attached to characters and no matter how long it's been since they were created, we want them to retain that essence that made us love them in the first place.

I will also point out my own hypocrisy in this matter.  If Marvel decided to permanently change the structure of the Fantastic Four, I would be bitter for just about ever.  If one or more of the characters died...ignoring all of the times one of them did and were resurrected a number of issues later...I would be inconsolable.

There's a big part of me, though, that likes to see progress in the characters I follow, which is one of my biggest hangups about many mainstream books.  The Flash (the Barry Allen version) is a high profile example of a restoration of the status quo within comics, though this one is fairly unique in that the character was "dead" since the mid 1980s.  To bring a character back to prominence after 25 years isn't unheard of (just look at Marvel's decision to bring back Bucky after he died at the end of World War II, though this was revealed in the 1960s), but it's not commonplace, and it makes me wonder just who under 50 years old was clamoring for the Flash's return. 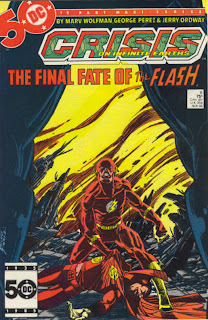 Most of the exasperation on my part comes from the fact that Barry Allen's return is largely at Wally West's expense.  Wally West has been the Flash since Barry Allen died in heroic fashion in DC's Crisis on Infinite Earths #8, and I suppose that this is where my hypocrisy shows its true form: I hate seeing MY Flash get pushed to the back burner for a character that is probably my dad's favorite version of the character.

I was hoping that the miniseries Flash: Rebirth, which welcomes Barry Allen back into the DC land of the living, would be a red herring of sorts; I think it'd be quite the shock if, at the end of the series, Allen realizes that (for some reason) he CAN'T come back, that the world has passed the fastest man alive by, and he gracefully rides into the sunset, but that doesn't appear to be the case, especially with Wally West's new costume change.

All of this makes me wonder if, in 15 or 20 years, Wally and other 90s heroes like Kyle Rayner (who is always getting the short end of the stick as a Green Lantern) will be making a big comeback...and if I'll be part of the problem that I'm railing about now.
Posted by Jeff at 2:34 AM