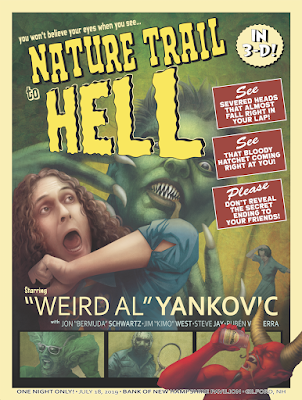 In June, I posted some images of the first poster I worked on for "Weird Al" Yankovic's Strings Attached tour, July 7th's Pittsburgh stop. I actually worked on three different posters, the second of which was the July 18th show in Gilford, New Hampshire. For this one, I worked with my pal and frequent collaborator Duane Redhead, artist on The Tick and Teddy and the Yeti. You can see the final image above; let's take some time and look at how it was put together. 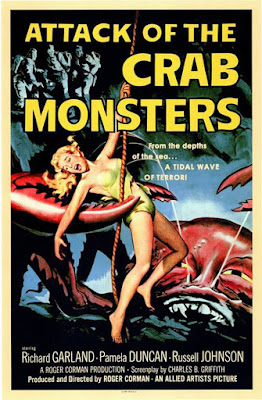 "Nature Trail to Hell" is a Weird Al deep cut, but it's also one of my favorites (though I suppose you could say that a lot of Al's songs are my favorites). When I was contacted about doing these posters, I specifically suggested Nature Trail, so I'm pretty thrilled that I was actually able to do it. The song itself is a throwback to both old scary songs and scary movies, so I knew that I wanted the tour poster to reflect that. One really fun aspect of making the poster was just getting to go through images from old 1950s-era sci-fi and horror movie posters. I took some inspiration from a lot of different images, but the above and below images provided some obvious impressions. 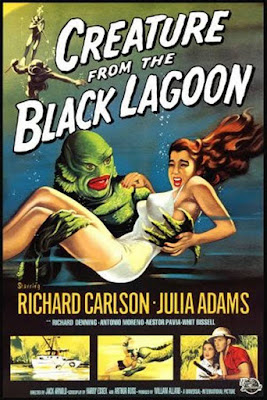 The triptych image at the bottom of this one was something I had to try and duplicate, if nothing else than so I could cram more art into an already crowded poster. 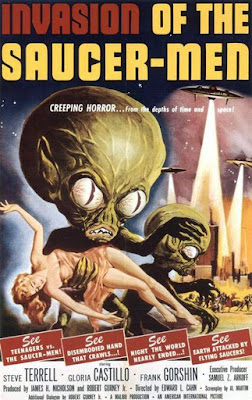 I also loved the title cards at the bottom of this one, and I was happy that I could duplicate the "See" font pretty easily in the new poster - and it reflected lyrics from the song, too! 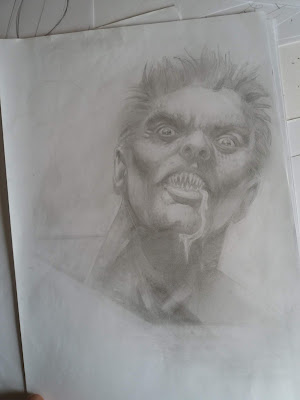 After I had a basic idea down, I contacted Duane about doing some of the heavy lifting, and thankfully, he was up for it. 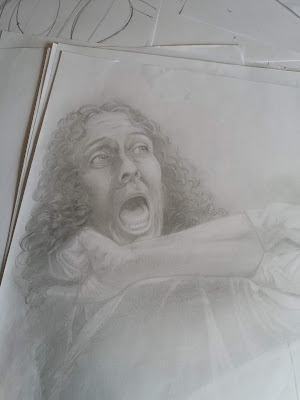 Duane produced some of the most detailed art of his career, I think, for this poster. He drew a number of the elements on separate pieces of paper, scanned them, and then put them all together digitally. 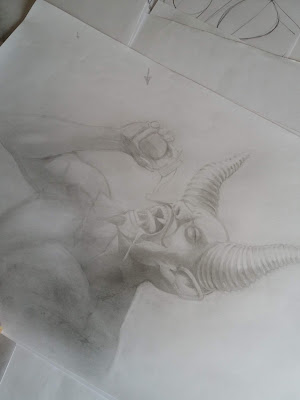 The three images at the bottom of the poster could easily have been afterthoughts, but Duane put a lot of work into these, based on some pretty obscure references that he and I thought would add something to the poster.

There's a backwards message in the song that says "Satan eats Cheez Whiz", which I think is one of the greatest sentences in human history, so I knew that I wanted to see that somewhere in the poster. 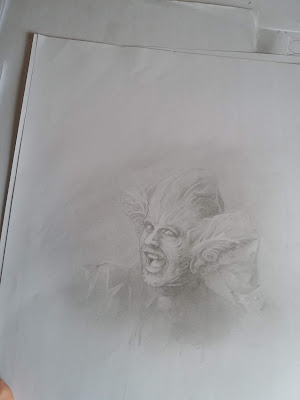 This reference isn't from the song itself, but since it includes both Al and monsters, I thought it'd be appropriate to reference. It's Al as the Cabbage Man from the TV show "Amazing Stories". Duane later added glasses to complete the look. 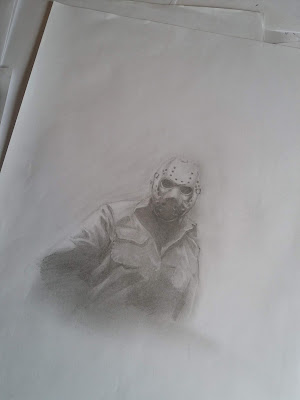 Jason (later with a tennis racket) was Duane's idea, as he thought the juxtaposition would be funny. 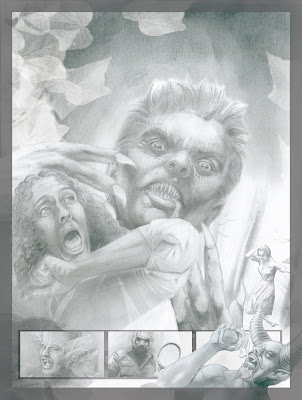 Here's a look at some of the pencils... 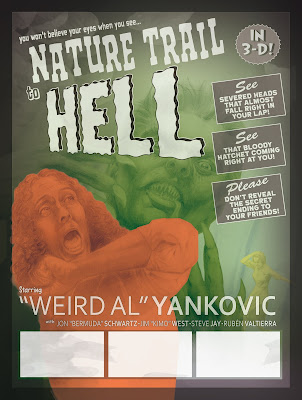 ...and some early color work. 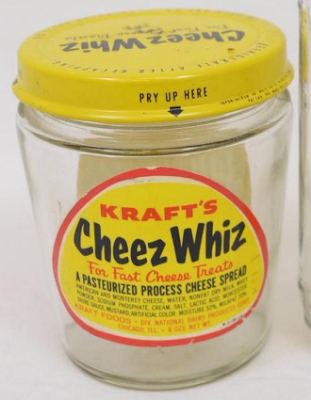 The jar of Cheez Whiz that Satan is pouring from is taken from a 1950's era glass jar.

This poster was probably the most detailed of any that I worked on, just because it had so many elements coming together in a pretty busy image - but one that I hope evokes the impression of an old drive-in scary movie poster. It also involved the most work on my end, with the title fonts and the credits and just trying to fit everything in in an appropriate manner. I got some good feedback from both Al's team and regular folks who saw it when Al posted the image on Instagram. I hope you all like it, too! 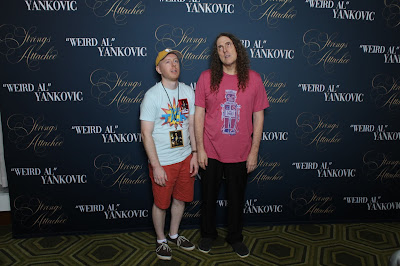 While we're here, let's look at some pictures from the July 7th Pittsburgh show, which I attended! 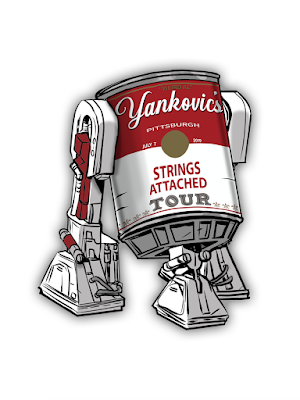 As mentioned, this is the poster I worked on with Jeff McComsey for that show. 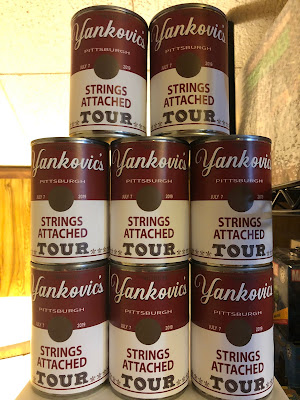 I also took the label I created and made some actual soup cans. I gave these to Al, some band members, and a few fans and tour workers. I also left one outside and posted a picture of it online as an impromptu scavenger hunt... 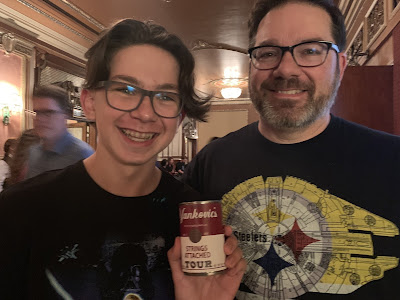 ...and someone actually went and found it!! 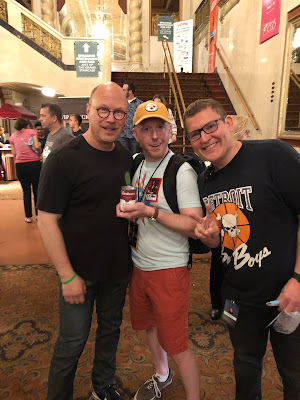 One of the more surreal moments of the night was when I actually got to meet Donald Warhola, who is Andy Warhol's nephew and one of the curators of the Warhol Museum in Pittsburgh. Life is strange sometimes. 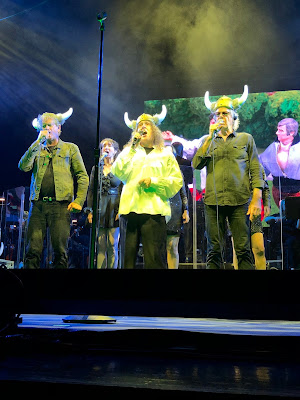 The show itself was, of course, wonderful. I'll never get tired of seeing Al in concert. 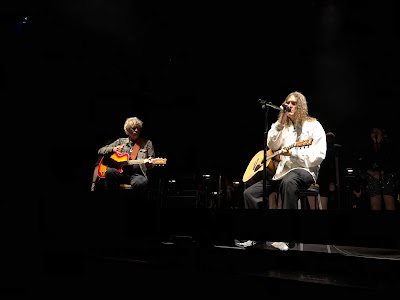 Al played "You Don't Love Me Anymore", after which he smashed his guitar on stage. What happens to those broken guitars after every show?? 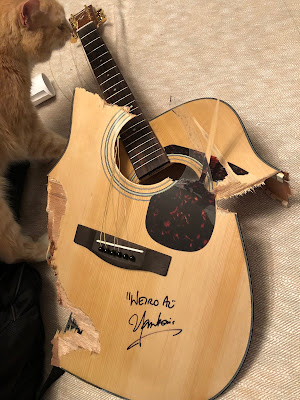 Sometimes I end up with them, I guess. Also, there's my cat. 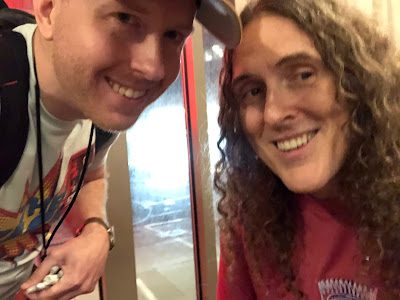 I'm sure this comes as no surprise, but I really like Al and his shows. So it was a pretty big deal for me to get to play a small part in these three tour dates. I've got one last poster to show off, which I'll do soon. It was already announced so maybe you've seen it! I'll write again about that one soon. 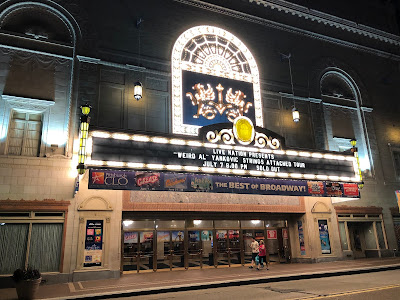