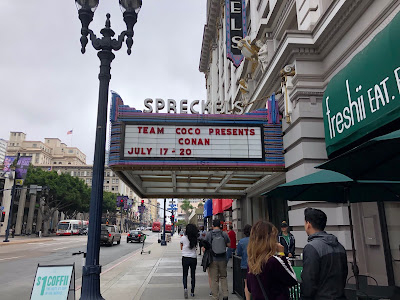 Preview Night started early for me this year, as I was lucky enough to get tickets to the Conan O'Brien taping that took place before the convention officially opened. This means getting up early and waiting in line - a Comic-Con tradition! - to officially get the tickets you had semi-reserved. I got in line at about 7:30am; there were several hundred people in front of me. But I got my tickets and was set loose at around 10:00. 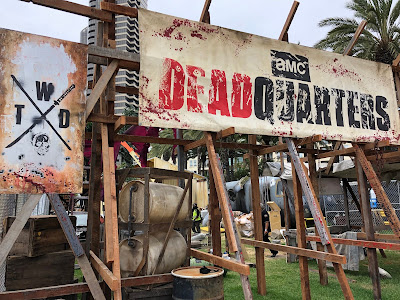 From there I hopped back over to the convention center to complete the booth setup...and to see some of the displays while there was time. 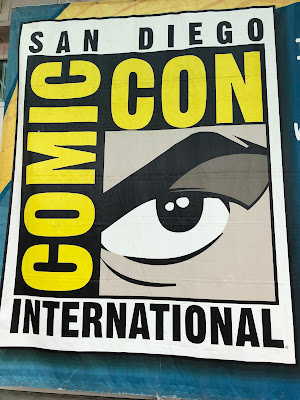 The Comic-Con tarp thing that hangs outside of the convention. Still looking good after another year in storage! One of the nearby parking garages was dressed up in an Avengers promotion. 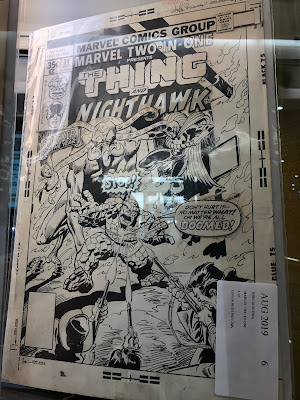 I saw a few interesting things on the show floor. This Marvel Two-in-One cover caught my eye, for some reason. 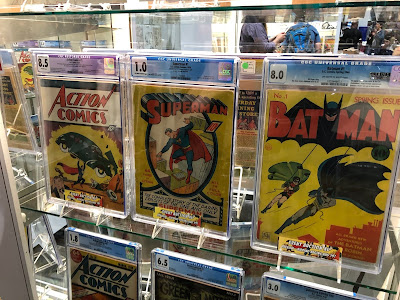 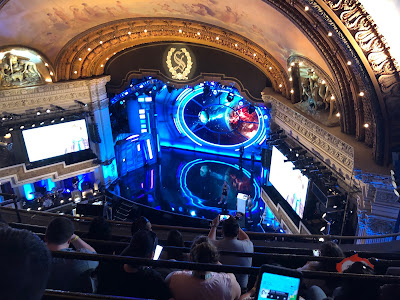 The Conan taping started at around 3:45 that afternoon. The Spreckels Theatre looked snazzy, as always. 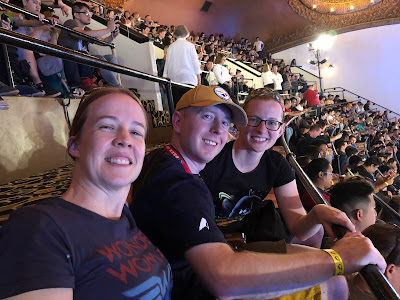 Here I am with some friends! I'm apparently showing off my bracelet. 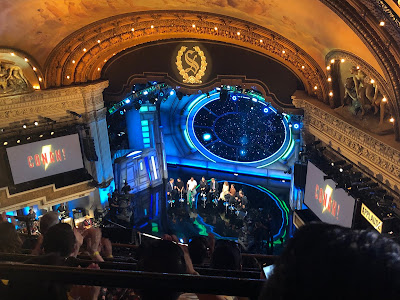 The guests on this day were from the It sequel. Bill Hader giggled through most of the interview. It was a weird show - more raunchy than I had expected. I know that Conan recently moved to a new 30-minute format, but this show ran an hour. Everyone was excited to be there! And when the show ended, we burst out of the theater and galloped toward the convention center. It was great to be able to see the show without having to miss any time at the convention. 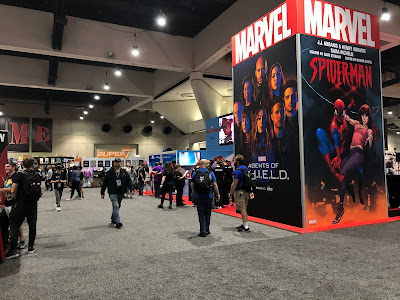 I got inside about a half hour before the floor opened. It's always fun to see things right beforehand - there's a nervous energy going through the crowd of exhibitors. 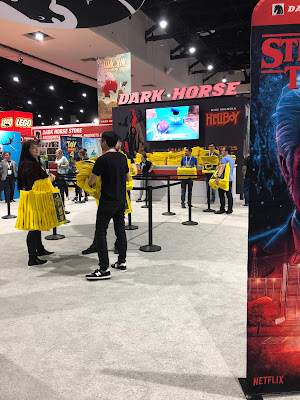 And here's the Dark Horse staff getting those yellow bags ready... 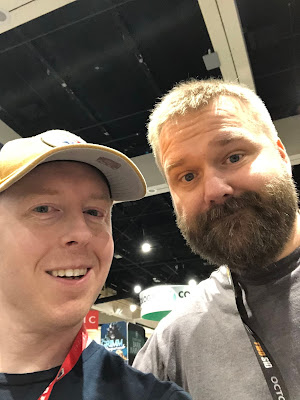 ...and I saw Robert Kirkman walking around the floor... 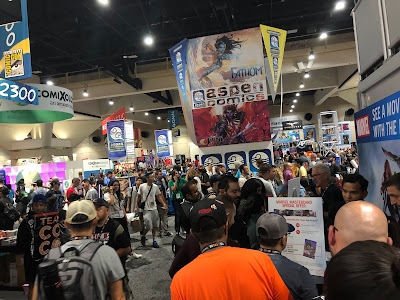 And then it was open! And it got crowded fast. 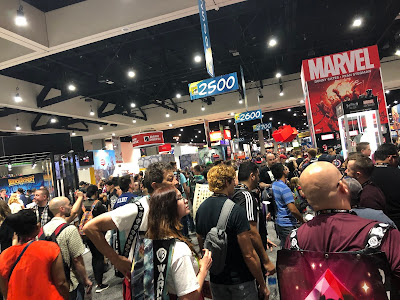 One of my first stops was the Marvel booth. I'm a sucker for SDCC comics and Marvel has had some interesting ones the past few years. 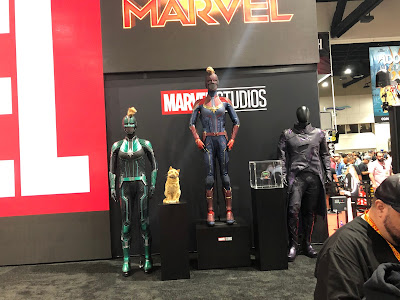 Some Captain Marvel costumes and props were on display by the booth! 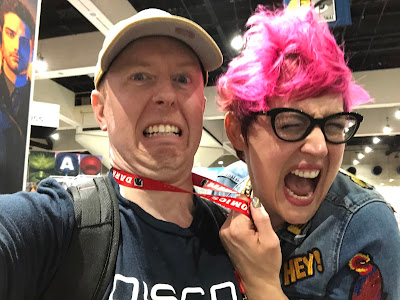 I passed by Grae Drake, former Rotten Tomatoes gal and current Ms. Moviefone, and we got this very natural picture together. 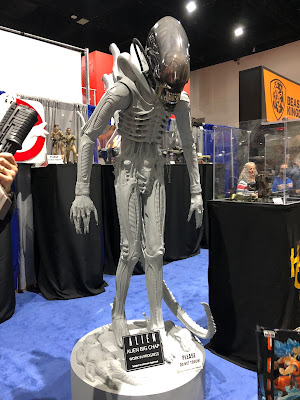 In years past, I was able to do most of my shopping on this night (to be fair, I shop every day, but I get the bulk of my "must have" items on Wednesday if I can). This year, for whatever reason, the lines seemed to move more slowly than I remembered. I stood in the Marvel line for quite some time, and when I got out, there wasn't a lot of time left to see and do other things. But I did see this Alien statue! 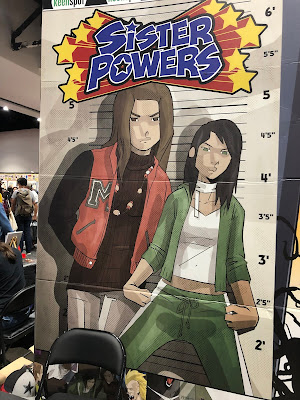 So, I apparently have a three-issue comic series coming out this fall from Keenspot? This was interesting to see. I'll write more about it at another time, but a lot of this was unexpected. 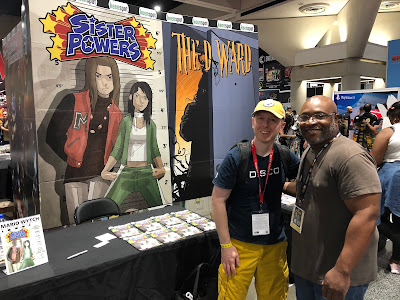 Here's my friend and collaborator Mario Wytch, who I met for the first time in person, despite knowing him online for about 15 years. I also learned at this show that his last name is not pronounced "witch". 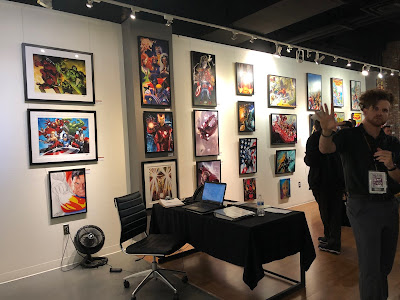 After the show ended for the night, I stopped by the Chuck Jones Gallery in the Gaslamp district, one of my go-to locations every year. It's always a fun place to stop and see. 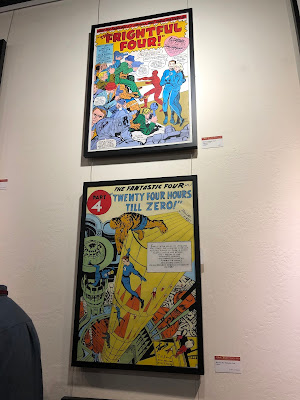 There were some neat Fantastic Four prints on display among the other items. 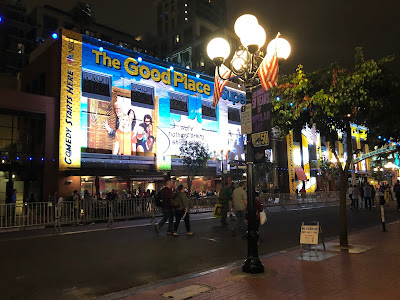 NBC's The Good Place had a pancake diner right in the Gaslamp, which seemed to be one of the more popular attractions during the show. 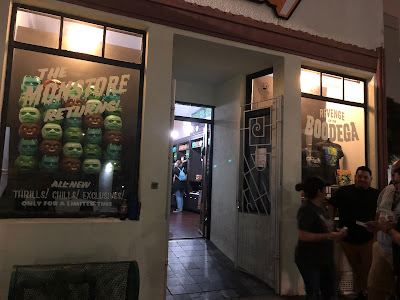 Super7 once again had a neat offsite pop-up shop; this year it was called the "Boodega" after being Skeletor and Hordak's Lair for the past few years. The line was just as long as it always was, though, and because I don't have any particular affinity for the Universal movie monsters, this was as close as I got. 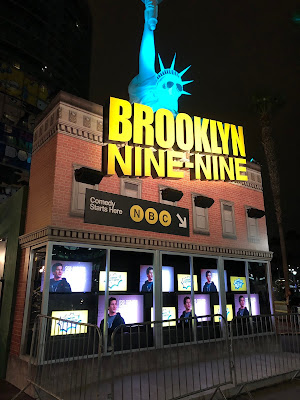 It was a pretty low-key night all around, but it was a big day with Conan in the morning and early afternoon. After getting some pizza, I was ready to head back and get ready for Thursday. We'll look at those pictures soon!
Posted by Jeff at 3:59 AM