What now for the comic industry? 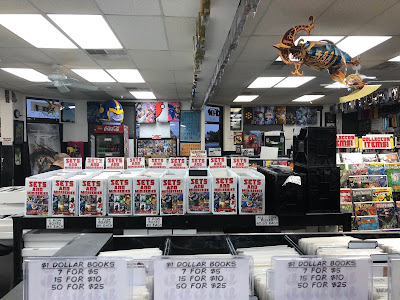 About a month ago, I was in Virginia Beach, Virginia, and of course, I stopped at a comic shop - Comic Kings, to be specific. While I was in Virginia, the national conversation started about the coronavirus in the US (this in itself was a few months too late), and a few weeks later, much of the country is under lockdown, with businesses, sports leagues and, well, seemingly the entire comic book industry mostly closed or on hiatus.

There are many considerations more important than the shipping schedule of comic books right now, of course, but hey, this is a comic book blog and I sometimes write comic books, so...it seems pertinent to talk about it here. This has affected me personally beyond being just a fan - Free Comic Book Day has been delayed for the foreseeable future, which means the Tick FCBD 2020 Special I wrote won't be out in May. I have a few projects that I'm working on that are now up in the air and might be cancelled outright. I'm delaying my Planet Comics Kickstarter campaign and pushing it back to some later date. I was even helping out at a local comic shop on a temporary basis, organizing stock - with shops closed, that's finished. 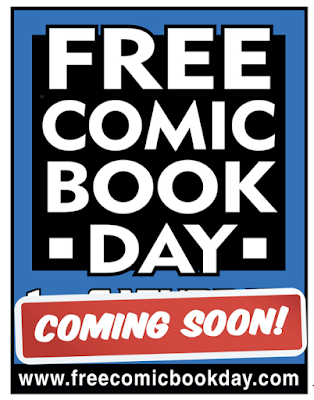 Wednesday, April 1st, will be the first Wednesday without new comics for non-holiday reasons for the first time that I can remember after Diamond announced that it would no longer be receiving any new shipments from publishers. Comics showed up in stores the day after 9/11, if you remember - though this is a different circumstance.

Organizers are postponing and cancelling comic conventions all over the world. Emerald City Comic Con was the first major show to be pushed back (at least) in March, followed quickly by Wondercon in Anaheim. I am, of course, closely watching for any news on Comic-Con in July. This is a gathering where over 100,000 people show up in a relatively confined space for five days in a row. Unless something changes quickly, I have to believe that this show will be delayed until late 2020 (September or November, maybe?), if it won't be cancelled altogether. 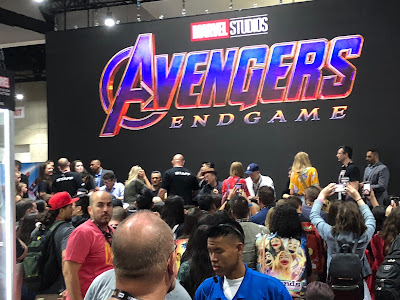 All of these precautions are, of course, good ones. Going to a Free Comic Book Day signing or a comic convention would be a terrible idea during a pandemic, and all of the current social restrictions will be worthwhile if we stick with them. But I still have some disappointment that these yearly staples are in jeopardy while we all stay home.

What does this mean for the comic book industry, though? For one, it shows the vulnerability that exists by having a single point of distribution - Diamond Comics Distributors. That's not to say that things wouldn't (or shouldn't) be shut down right now if there were a hundred different distribution channels, but it does point out how much power Diamond has. If something were to happen to the company - a natural disaster or financial issues, let's say - to the point where it couldn't ship anything, the entire industry in North America would shut down in a day. That's a scary thought.

This also shines a spotlight on digital comics. Comic fans have always resisted changes in format, and moving from a physical product to a digital one is one of the biggest changes you could have. But now, with no physical distribution for the near future, digital comics are pretty much the only way anyone can read new stories. So far, it appears the reaction has been mixed, as some companies are sticking with print-first, while others are releasing a few titles digitally this Wednesday.

As someone who spends way too much of his income on comic books, I've always been mostly ambivalent about digital copies, especially when they're stored elsewhere and you can't copy them to a hard drive. And going digital completely eliminates variant covers - which is kind of a relief, but it's hard to deny that variants are a big part of some publisher's business models.

This also means that comic shops are left in a very precarious place. A hypothetical shift to digital means that a lot of these stores would be left in the lurch and will go out of business - I can't see how that wouldn't happen. Even if graphic novels and collections would stay in print, comic stores could never compete with Amazon. There wouldn't be anything for them to sell, and that, I think, would have catastrophic impacts on the industry.

In the meantime, I'm actually kind of relieved to get a chance to catch up on some of my unread books. I know that I'll never be completely caught up - this is the curse of a comic collector - but not having a pull list that I have to keep up with, when my income is, well, down, is a small silver lining. I cleared out my folder on March 18th and placed an online order for books on the 25th, so I've got plenty to tide me over for now, and I guess we'll see if I can make a dent in my unread pile in the next few weeks. Still, it is very weird to not have any new comic books to look forward to this coming Wednesday, and if this turns out to be a long-term issue, who knows what lasting repercussions it'll have?

For now, stay safe, blog readers, and try to stay inside. The next few weeks and months are sure to be very interesting. Here's hoping that the comic industry can make it to the other side, even if it comes out looking different than before.

Oh, and Comic Kings had this great Thing/Hulk artwork hanging up inside the store. Check it out! 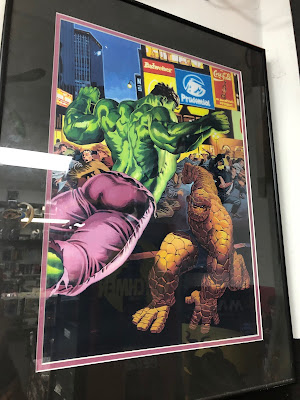 That's a great shot of Hulk beating up Thing.

That is not what is happening.